BEYOND LOCAL: A 95-million-year-old reptile’s solution to the problem of tooth wear

Priosphenodon challenges our views of reptiles as having simple teeth compared to mammals, showing that under the right conditions, even reptiles can evolve extremely complex teeth
Jun 20, 2021 9:25 AM By: The Conversation 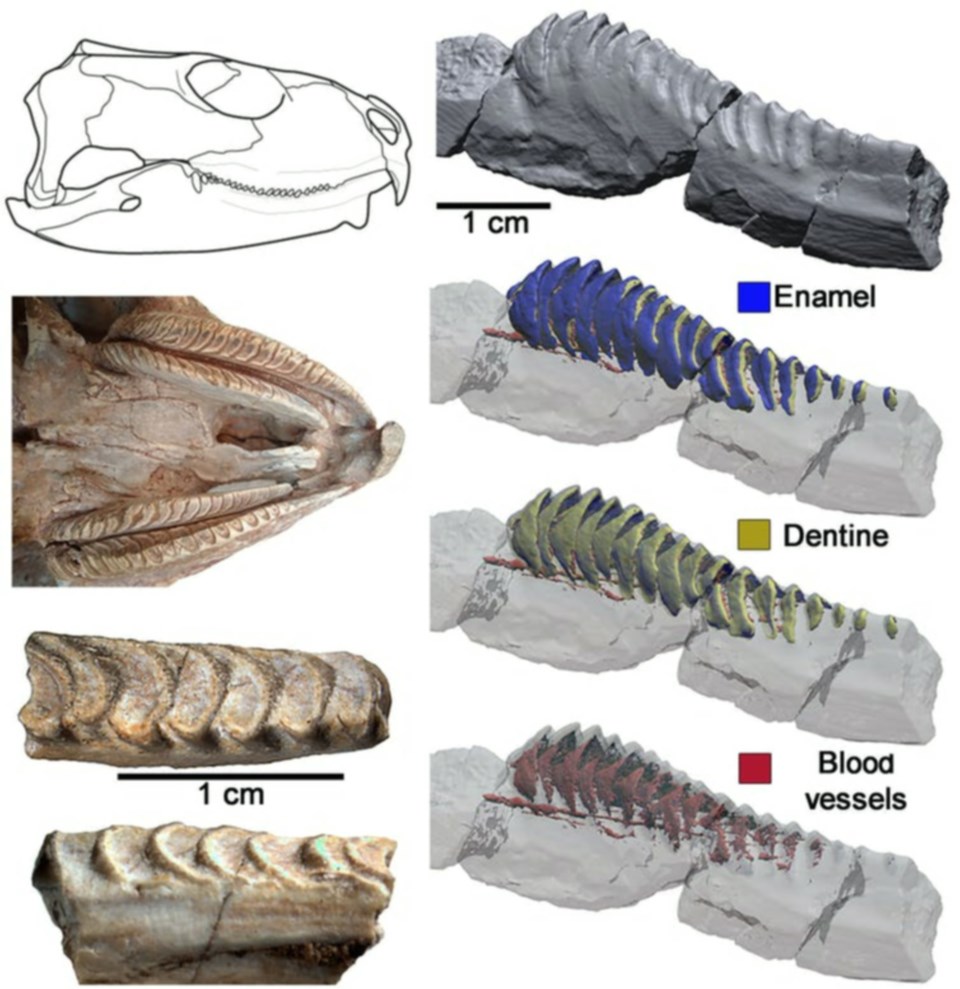 The upper (left) and lower teeth (right) of Priosphenodon. The images on the right were generated from CT scans.(Aaron LeBlanc), Author provided

Eating plants is a challenging diet for many animals. To help extract the rich plant nutrients, modern mammals have specialized teeth for crushing up the hard plant parts to give the digestive system a head start. But modern plant-eating reptiles usually take a different route.

Priosphenodon lived during the earliest part of the Late Cretaceous in what is now northern Patagonia. Fossils of this close relative of the modern New Zealand Tuatara are found in great abundance at the famous La Buitrera Palaeontological Area, in Río Negro Province, Argentina. This fossil locality is also well known for its rear-limbed snakes, mammals and dinosaurs.

The rocks at La Buitrera preserve evidence of an ancient sand sea, called ergs after the great Erg deserts of modern North Africa. Such environments can be seasonally rich as climate changes and plant communities prosper, which can stop the movement of dune sands.

Priosphenodon is the most abundant and one of the few plant-eating reptiles at La Buitrera. Similar to modern ecosystems where plant eaters greatly outnumber carnivores, the abundance of Priosphenodon fossils is tenfold to that of the known meat-eaters.

By using computed tomography (CT) scans and thin sections of fragments of Priosphenodon jaws, we unravelled the secrets locked inside the teeth of this unique reptile.

Reptiles typically have simple-looking, cone-shaped teeth that are covered in very thin enamel, which is the hardest layer on a tooth. As their teeth wear down, they continuously make new teeth to replace their old ones.

Priosphenodon is an exception to this rule. Having inherited an inability to replace old teeth from its sphenodontian relatives, this Cretaceous-era reptile did something very different. Priosphenodon teeth are more like half-cones that stack together lengthwise. The teeth are even folded along their bases into complex shapes like those of some plant-eating mammals.

These teeth were excellent tools for grinding and shredding.

The key ingredient that made Priosphenodon a successful plant-shredder lies inside its enamel. Details of the fossilized enamel reveal that it was made of tiny threads of enamel crystals, called prisms. This type of enamel has never been seen before in a fossil reptile, but it does show up in the teeth of virtually all mammals and helps prolong the life of each tooth.

But if reptiles have the ability to make this stronger type of enamel, why don’t we see it in other kinds of reptiles? The answer lies in Priosphenodon’s evolutionary heritage, as well as its diet.

Many other species of modern and fossil reptiles cannot replace their teeth, but very few are also as well adapted for eating plants as Priosphenodon. Having such durable teeth while being restricted to eating the tough desert plants of the Patagonian erg allowed Priosphenodon to thrive in this demanding environment.

Priosphenodon challenges our views of reptiles as having simple teeth compared to mammals, showing that under the right conditions, even reptiles can evolve extremely complex teeth.