BEYOND LOCAL: Here’s how to keep coworkers’ germs at bay this flu season

Doctors recommend getting the flu shot, practice handwashing, stay home when sick and encourage others to do the same
Nov 20, 2019 9:25 AM By: Global News 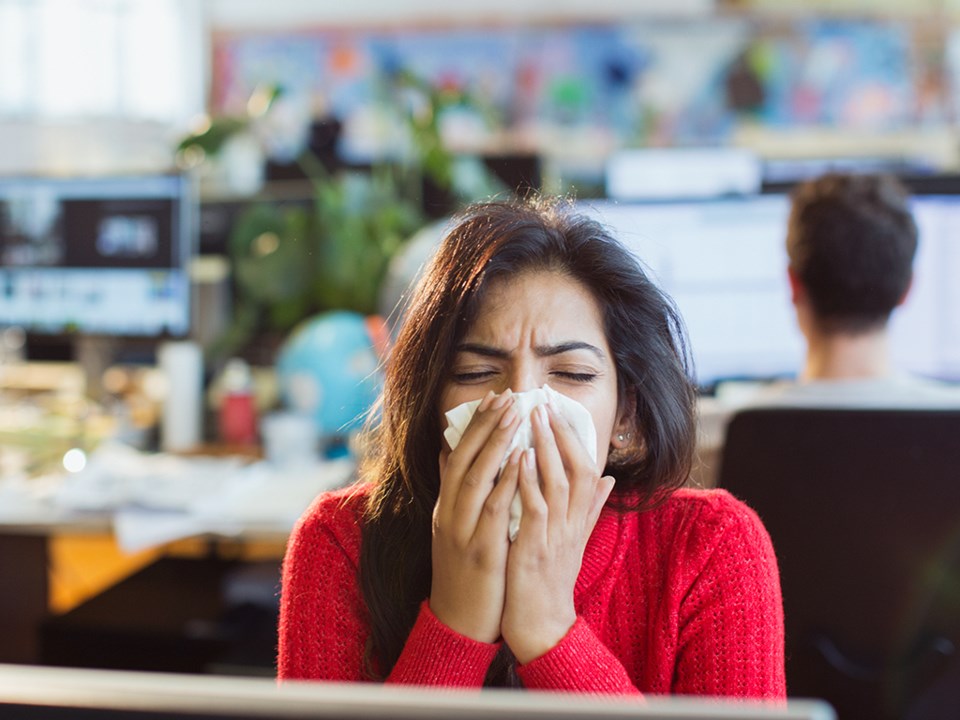 An estimated 12,200 Canadians end up hospitalized due to the flu each year, Health Canada reports, and the virus also causes around 3,500 deaths annually.

Because the flu virus, or influenza, is primarily spread through droplets made when coughing or sneezing, workplaces can be hotbeds for transmission.

So how can you prevent yourself from catching the flu at work? Here, doctors share their advice.

Get the flu shot

Dr. Kamran Khan, an infectious disease physician and scientist at St. Michael’s Hospital and a professor of medicine at the University of Toronto, stresses the importance of the flu shot.

Khan, who is also the CEO of BlueDot, an infectious disease prevention tool, says Canadians should get their flu vaccine annually.

“It’s not 100 per cent perfect in preventing influenza, but it’s roughly going to cut your odds of getting a flu in half,” Khan said.

“It is important for people to be aware that it is their best chance at reducing their risk of getting the flu.”

Khan points out that the flu shot not only protects you, it also helps prevent spreading the virus to those who are at high risk of catching the flu.

This includes seniors, those with compromised immune systems, young children and pregnant women. For at-risk populations, the flu can lead to serious complications and even death.

“Even if employees are young, healthy and don’t have risk factors for severe consequences from influenza, simply getting the vaccine means they’re less likely to become sick and pass the virus on to someone else in their work environment,” Khan said.

Dr. Ian Gemmill, a Kingston, Ont.-based public health consultant and former chair of Immunize Canada, says that because influenza is spread from person to person, it’s important for people to frequently wash their hands.

Health Canada points out the incubation period of the flu can range from one to four days, meaning people can spread the virus before they even realize they’re sick.

The government agency adds that people can pass on influenza up to five days after they first experience symptoms.

Gemmill adds that on top of direct contact, the flu virus can survive on surfaces for roughly a day. This means that common objects, like bathroom door handles or telephones, can transmit the influenza virus to your hands.

If you touch a contaminated surface then touch your face, for example, you can contract the flu.

Encourage employers to be part of flu prevention

One way Gemmill says workplaces can promote flu prevention is by offering employees free on-site flu shots. In certain workplaces, having the virus go around can lead to severe consequences.

“You don’t want to have a fire department or a police department basically wiped out for a week or two,” he said.

Gemmill points out that not all workplaces have paid sick days, meaning certain employees may be inclined to come into work even if they’re sick.

To combat this, Gemmill says workplaces should work towards having policies that protect wage loss in the case of illness.

“To have some of those policies in place to allow people to stay at home, get better and not infect other people, it will really help employers keep a healthy workplace,” he said.

One of the challenges in North American workplaces is the idea that employees always need come into work, Khan said.

But if you suspect you have the flu, it’s better for your health and productivity to stay out of the office.

“If you are sick, you should simply be staying at home and resting so that you can actually recover as quickly as possible and not expose other people in the workplace,” Khan said.

BEYOND LOCAL: Blaming women for breast cancer ignores environmental risk factors, expert says
Jul 6, 2020 9:25 AM
Comments
We welcome your feedback and encourage you to share your thoughts. We ask that you be respectful of others and their points of view, refrain from personal attacks and stay on topic. To learn about our commenting policies and how we moderate, please read our Community Guidelines.