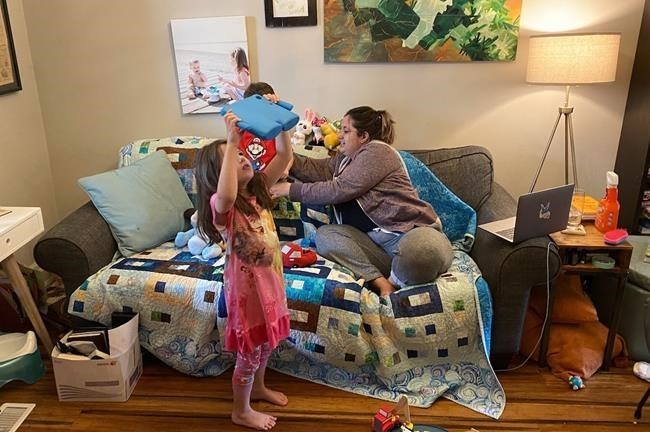 Amanda Munday’s business had just become profitable and hired its ninth staffer when the pandemic hit.

Overnight, revenues at her drop-in coworking and childcare space in Toronto's East End, fell to zero.

Since then, the entrepreneur has juggled trying to keep her business afloat while caring for her two children, aged four and six.

“It feels like I’m drowning and there’s no one to offload anything to,” said Munday, the founder and CEO of The Workaround and a single mom.

She's not alone. New research offers data to support what many have noticed: Businesses owned by women have been hardest hit by the pandemic.

A study by FreshBooks said women-owned businesses across all industries are taking nearly twice as long to recover from the financial setbacks brought on by COVID-19 compared with businesses owned by men.

Even industries that are normally women-dominant are now seeing male-owned businesses recovering significantly faster, while self-employed women in industries that rebounded quickly are still recovering much slower than their male counterparts, the study shows.

It’s the latest research to expose a troubling gender dimension to the pandemic, one that has seen women take on more child and elderly care as well as household chores sometimes at the expense of careers and businesses.

For Munday, it's meant a daily tug of war between caring for her children and keeping her business alive.

“There’s no question my business is suffering,” she said. “I am torn between caring for my children and running a business, and there is no world in which I'm giving my business my full attention. My focus is always split between children and work.”

It’s meant long days of homeschooling, parenting and domestic chores, sandwiched by early mornings and late nights of trying to keep her business from going under.

“I actually apply for the wage subsidy for my staff at 6 a.m. on Saturday mornings,” Munday said. “And I try to catch up on everything else in the evenings when the kids are asleep.”

Even though her business is at a reduced capacity, she said applying for subsidies to help pay wages and bills, managing COVID-19 protocols and increased cleaning on top of the regular work of running a business is onerous.

“I’m bleeding cash I don’t have,” Munday said. “I'm playing a game of moving money around and I’m not sure how much longer I can do this.”

Even with schools back to in-person learning, she worries about how long it will last. There were three COVID-19 exposures in her children’s classrooms last fall, and each time she had to quarantine for two weeks.

“I had to spend even more for professional cleaners because I couldn’t go into work at all,” Munday said.

A string of studies released over the past 11 months have found women are generally bearing more of the domestic burden from the pandemic, a trend that is having an impact on women's paid work.

A United Nations report, for example, found that while both men and women saw their "unpaid workload” increase, women still took on more childcare, teaching, cooking, cleaning and grocery shopping, according to the report.

Research by RBC Economics found the coronavirus pandemic knocked women’s participation in the labour force down from a historic high to its lowest level in more than 30 years.

The disproportionate effect on women has even been described as a “she-cession” by Deputy Prime Minister and Finance Minister Chrystia Freeland.

Research from Statistics Canada suggests the pandemic had a similar impact on all businesses, but that women-owned businesses were still more likely to lay off a larger proportion of their workforce and have more employees working remotely.

They were also slightly more likely to report that they were not planning to expand next year and did not have the ability to take on more debt.

Meanwhile, female entrepreneurs have also been less likely to access the federal wage subsidy, Corinne Pohlmann, senior vice-president of the Canadian Federation of Independent Business, told a House of Commons committee in November.

In a presentation to the Status of Women committee, she said female-owned businesses tend to be newer and smaller and are having a harder time recovering.

The CFIB research also showed that female-owned businesses are also more concerned about cash flow, debt and “overwhelming stress" than their male counterparts.

Martha MacDonald, an economics professor in the Sobey School of Business at Saint Mary’s University, said women-owned businesses are more likely to be in service industries like retail, accommodation, food services and tourism.

But she said the issue of childcare and unpaid work in the home is critical to understanding women’s participation in the workforce during the pandemic, either as an entrepreneur or an employee.

“Whether you're a wage employee or you're trying to run a business, women are the ones that have been affected the most by childcare being shut down or by kids being sent home from school,” MacDonald said.

“The evidence is quite clear that women have been more likely to be affected by their home responsibilities during the pandemic than men.”