COVID-19: Will we ever shake hands again?

Health experts say handshakes assist in spreading influenza, the common cold and a number of other viruses other than COVID-19
May 25, 2020 8:55 PM By: Global News 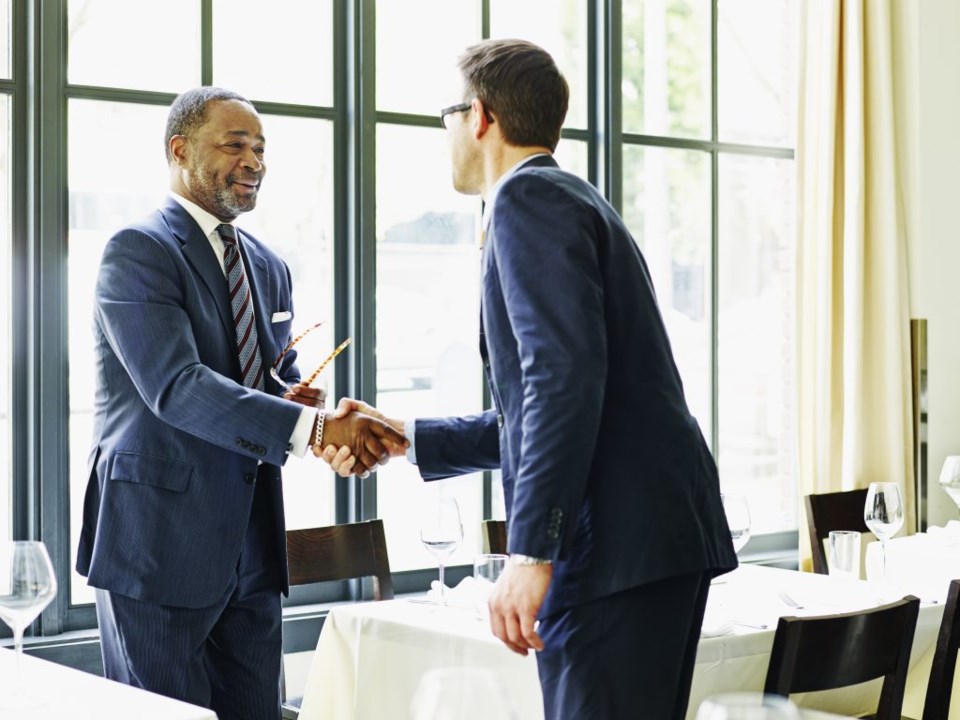 In Canada, the handshake is a ubiquitous greeting.

It’s used to say hello, to introduce yourself to someone new or to signal a potential employer that you’re trustworthy, confident, and the right person for the job.

But in a world where the deadly COVID-19 remains a constant threat, is the handshake safe?

When the pandemic first began, the handshake was widely advised against by public health officials in Canada.

Although restrictions are beginning to lift across the country, people are still being asked to maintain a physical distance of two metres (or six feet) between themselves and others, making handshakes impossible.

From a public health perspective, Colin Furness at the Dalla Lana School of Public Health believes this should’ve happened years ago.

“Hands are a vehicle for spreading infection,” Furness said. “I sneeze in my hand, I then touch a doorknob, you touch the doorknob and then you touch your face, and boom — the infection has spread, even if we’ve never met.”

A handshake cuts out the extra step, making it even easier for germs to spread.

“A handshake supercharges that. You don’t even need the extra intermediary,” he said.

And the concern isn’t just spreading COVID-19 — handshakes assist in spreading influenza, the common cold and a number of other viruses.

“We use our hands for a lot. People often sneeze and cough into their hands,” Furness said.

“I’m not a germaphobe, but that behaviour makes me wince, and it’s made me wince long before COVID-19.”

Unfortunately, the handshake remains deeply embedded in our way of life.

“Strictly from an animal standpoint, you have to approach (someone) within a vulnerable distance … It signals trust and rapport,” Furness said. “It’s really important, ritually and culturally.”

One place where the handshake is of the utmost importance: the workplace.

Handshakes are critical in a business setting, said Eddy Ng, professor of management at Bucknell University in Pennsylvania.

“When we meet someone for the first time, we assess that person by who reaches out their hands first, whether there is a delay in responding, how firm the grip is, palm up (or) down, one or two hands,” Ng said.

Used in important meetings, first-time interviews and more, “the handshake at the beginning and end of a meeting may be very different depending on the outcome of the meeting.”

“It’s going to be awkward … and everybody’s going to have to grapple with it,” said career expert Fiona Bryan.

“We’re going to have to learn not to judge.”

Bryan warns employees to prepare for a period of uncomfortable moments as people get accustomed to the new normal.

“There are going to be many, many times that people will not be able to stop themselves from reaching their hand out,” Bryan said.

“There’s going to be so many times that people are going to get so close to each other, forgetting.”

The bad news: from an infection control standpoint, the handshake is “incredibly irrational,” Furness said. The good news: it’s substitutable.

“Do we really need to shake hands? No,” Furness said.

Finding an adequate substitution may take a while, but the COVID-19 pandemic will likely signal a massive shift in our culture — and Furness is relieved.

“I think not shaking hands would be just such a big step for saving lives and ending untold suffering in the future,” Furness said.

“I actually feel kind of giddy at the idea that handshakes could be behind us.”

It’s important to note that refusing handshakes in spaces like offices may not be the same experience for everyone, Bryan said.

While all employees should feel comfortable saying “no” for the sake of hygiene, she believes people of colour, women and non-binary people are more likely to face repercussions or be labelled “unprofessional” if they refuse to shake hands with others.

It’s people traditionally associated with the workplace — namely, white men — who will need to sow the seeds of change, she says.

“How will they set the tone and manifest (these concerns) in their own actions?” Bryan said.

Employers should consider having frank discussions with employees about proper office etiquette moving forward, making it clear that the handshake is no longer expected and suggesting alternatives.

Bryan also recommends individuals have a “pre-thought-out sentence” that they can use to explain why they aren’t comfortable shaking hands.

“Explain that you have a high-risk individual in your family, for example, and say that you’re so pleased to meet them right now and then stop talking,” Bryan said. “Put the period there and look into their eyes.”

Questions about COVID-19? Here are some things you need to know:

Symptoms can include fever, cough and difficulty breathing — very similar to a cold or flu. Some people can develop a more severe illness. People most at risk of this include older adults and people with severe chronic medical conditions like heart, lung or kidney disease. If you develop symptoms, contact public health authorities.

To prevent the virus from spreading, experts recommend frequent handwashing and coughing into your sleeve. They also recommend minimizing contact with others, staying home as much as possible and maintaining a distance of two metres from other people if you go out.

CANADA: More than half of Canadians polled say they have experienced a cybercrime
Jul 11, 2020 5:20 PM
Comments
We welcome your feedback and encourage you to share your thoughts. We ask that you be respectful of others and their points of view, refrain from personal attacks and stay on topic. To learn about our commenting policies and how we moderate, please read our Community Guidelines.