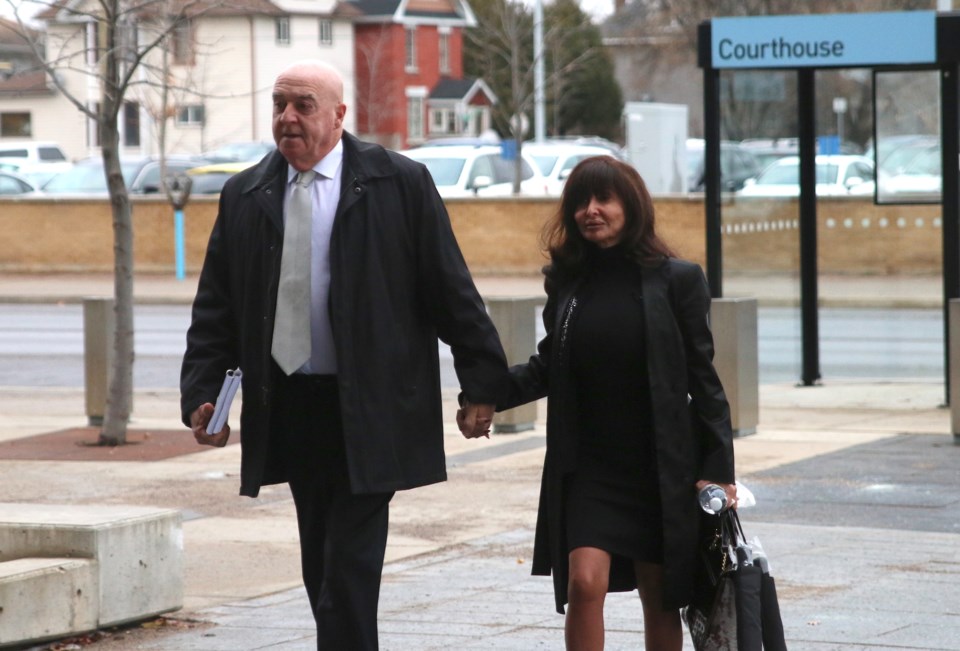 Keith and Marissa Hobbs enter the Thunder Bay Courthouse at the start of their trial for allegations of extortion. (Photo by Doug Diaczuk - Tbnewswatch.com).

THUNDER BAY - More details emerged involving alleged extortion attempts by former Thunder Bay mayor, his wife, and a local resident during the second day of testimony at the trial against the three accused.

Day 2 of the extortion trial against Keith and Marissa Hobbs and local resident, Mary Voss, continued on Tuesday.

Following Keen’s line of questioning, Brian Greenspan, who is representing Keith and Marissa Hobbs, began his cross-examination of Loverin and focused on his reliability in recalling the specific timeline and details of events, his relationship with the victim, and insinuating that he wanted to help the victim ‘get back’ at the three accused after being arrested following evidence of an alleged crime given to police.

During the morning session, a bizarre video shared on social media where the victim and Keith and Marissa Hobbs are present, was shown to the court.

The first reference to alleged extortion on the part of the accused to coerce the victim to purchase a house for Voss was also brought forward in Loverin’s testimony.

Loverin testified about a meeting between himself and Hobbs in the parking lot of a local grocery store, during which Loverin said Hobbs gave him a USB drive with videos on it that was to be given to the victim.

According to his testimony, Loverin said Hobbs told him he got the memory stick from a member of the Thunder Bay Police Service.

There was a conversation about what was on the memory stick and Loverin said he was told it included videos of the victim.

“You say Hobbs first introduced the conversation with his background of his family in the military,” Greenspan said. “He had a great regard of people who were in the military. Therefore, your involvement in military was something he admired. I suggest what he was doing is he was saying to watch and see this video to determine what kind of man you are working for and you should avoid it.”

“That’s not what I interpreted it as,” Loverin replied.

Greenspan questioned Loverin as to whether or not he knew what the content of the videos were, but he said he was not aware.

“He alluded that the videos, why (the victim) needed to see the kind of shit he was in, he didn’t go into direct detail of what was on those videos,” Loverin said.

One of the videos was allegedly of the victim signing a will and Greenspan asked Loverin if today was the first time he ever mentioned the content of the video, to which Loverin said he does not recall this being the first time.

But Greenspan suggested the victim informed Loverin of the video of the signing of the will as an attempt to minimize the contents of the USB drive, which Loverin disagreed.

Greenspan also questioned Loverin’s connection to the victim and what kind of relationship they had, arguing that it was in fact very close.

“Whenever he says anything to you, you interpret in the most favourable manner because of the close relationship with him,” Greenspan suggested.

Greenspan also suggested that when the victim was incarcerated, Loverin only visited him once, because the victim did not want it to seem like they were working together.

“I suggest its because he only wanted to talk to you by phone and didn’t want a record of you coming to do your bidding,” Greenspan said.

“We assumed everything was recorded anyways, if I went there or if it was phone call,” Loverin said.

“He told you what he’d like you to do in terms of the stories he wanted you to tell,” Greenspan asked.

There was also the matter of financial gifts given to Loverin by the victim, including two separate $10,000 gifts for his children when they were born.

“In between that time of the first $10,000 and other $10,000, what other offers of compensation are provided?” Greenspan asked.

Loverin did receive $6,000 in cash while the victim was incarcerated that he was told to be kept in safekeeping and used for expenses.

“Everything changed on November 20 when (the victim) was arrested and wanted to get back at Keith and Mary and Marissa and he convinced you to help him. Is that correct,” Greenspan asked Loverin.

“That is not correct,” Loverin replied.

Loverin also detailed a phone call he had heard between the victim and Marissa and Keith Hobbs regarding the purchase of a house and the cost of $450,000.

“When I came to the house that night and there was a conversation on the phone with Keith and Marissa, that is what he was saying, agreeing to make an amendment to the contract,” Loverin said.

He added that if the house was purchased for Voss, the separation would be effective and there would be ‘peace in the world.’

Loverin also testified about his decision to take the information he had to the RCMP, saying it was like a weight had been lifted off his shoulders.

“I had information about the memory stick that he passed off, the house purchasing, I wasn’t sure what to do or who I would approach with this information, be it the Thunder Bay Police or the RCMP,” Loverin said.

“I was concerned that Keith being a previous police officer that he had connections in the Thunder Bay Police and they would overlook it.”

George Joseph, who is representing Voss, began his cross-examination of Loverin late Tuesday afternoon and will continue Wednesday morning.

About the Author: Doug Diaczuk

Doug Diaczuk is a reporter and award-winning author from Thunder Bay. He has a master’s degree in English from Lakehead University
Read more