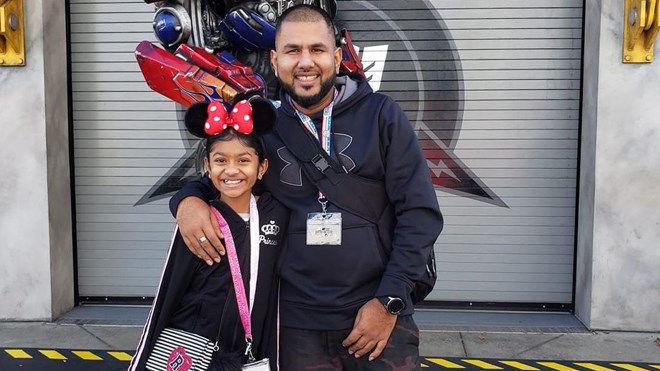 Eleven-year-old Riya Rajkumar was abducted and killed on Feb. 14. Her father, Roopesh Rajkumar, is in custody. The Amber Alert that was issued late in the night of Feb. 14 saw some people taking to social media to complain, while others phoned 911 in Peel Region to complain. (Supplied)

Peel Regional Police issued an Amber Alert at around 11:30 p.m. on Feb. 14, triggering thousands of Ontarians phones to alert them of missing 11-year-old Riya Rajkumar.

The alert system is designed to widely disseminate information about a missing person, usually a child, through cellphones, television and radio broadcasts, and electronic roadway signs.

Riya was located deceased at a residence in Brampton, and her father Roopesh Rajkumar was located and arrested, about an hour after the initial Amber Alert went out.

In the wake of the first alert, Peel Regional Police became inundated with complaints about the alert disturbing them, and were forced to issue a statement via Twitter.

"Our communications bureau is receiving numerous calls to 9-1-1, complaining about the late hour of the Amber Alert. As a direct result of someone receiving the alert, we were able to locate the suspect and his vehicle. The system works. Thank you to all those that called with tips."

Complaints about the alert were not limited to 9-1-1 calls to Peel Regional Police however, as Twitter lit up with angry messages from people who were upset that they were roused from their sleep while an 11-year-old girl lost her life. 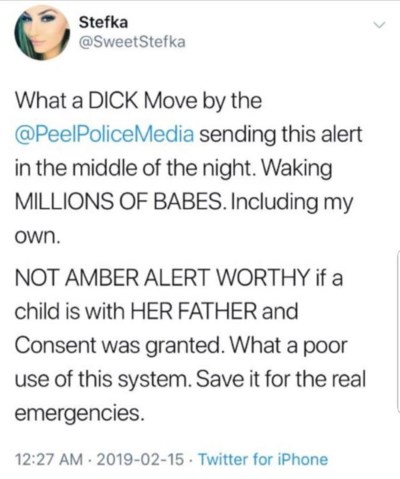 Twitter user @SweetStefka deleted the above tweet, and left the platform, after receiving an avalanche of backlash on social media. (Screen capture)

Communications officers with Peel police revealed on social media that the force received a series of complaints from residents that the Amber Alert was issued at a late hour.

"I can't even begin to describe how disappointing and upsetting it is to read the comments, emails and calls to our communications bureau complaining about receiving an Amber Alert late at night," wrote Const. Akhil Mooken on Twitter.

Actor and comedian Gerry Dee had some words for those who were complaining about the Amber Alert's late hour.

When we all received that amber alert last night, a little girl, in the care of her father, was about to be murdered. By her father. On her birthday. I can’t grasp this. Some of you lost some sleep because of the sound of the alert. But, you woke up. Unlike her. RIP Riya ??

While others may not have taken their tweets to the level of insensitivity that @SweetStefka did, there was no shortage of people who felt it necessary to express their annoyance.

As much as I am concerned about the child involved, how useful is it to wake me up for an #AmberAlert?  If I’m asleep I clearly haven’t seen the child

This emergency thing needs to be re-evaluated pic.twitter.com/jw7atp8oGx

Who the FUCK wants to be waken up from an amber alert at 12AM?! I'm not John Wick, I'm not gonna hop out of bed, suit up and searching the streets.

"I appreciate that a lot of people were sleeping but the immediate need to locate the child outweighed the momentary inconvenience that some people encountered," wrote Mooken on Twitter.

"Tragically this incident did not have the outcome we were all hoping for but the suspect was located as a direct result of a citizen receiving the alert and calling 9-1-1. The system works."

BEYOND LOCAL: Designing artificial brains can help us learn more about real ones
Feb 23, 2020 9:25 AM

CANADA: Divorce can be overwhelming. Here's how to discuss it like adults
Feb 22, 2020 9:25 AM
Comments
We welcome your feedback and encourage you to share your thoughts on this story. We ask that you be respectful of others and their points of view, refrain from personal attacks and stay on topic. To learn about our commenting policies and how we moderate, please read our Community Guidelines.

About the Author: Matt Durnan