Ford says he will be reaching out to ask for any extra AstraZeneca vaccines
Apr 19, 2021 9:11 PM By: Village Media 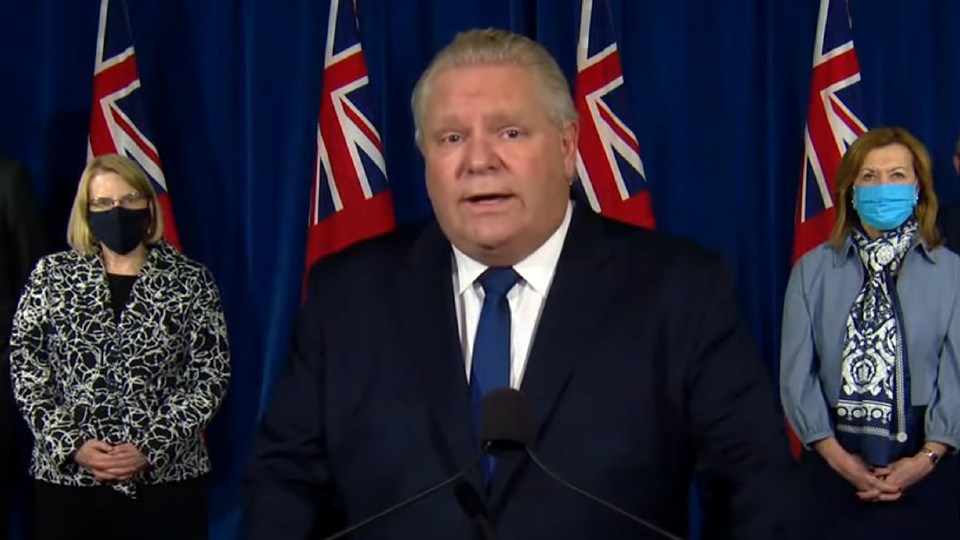 Premier Doug Ford's office says Ontarians should brace themselves for yet another vaccine delay.

In a statement released this afternoon regarding the province's procurement of COVID-19 vaccines, the premier's office said that, in addition to delayed and cut shipments of the Moderna vaccine, Ontario can also now expect delays of two shipments of the AstraZeneca vaccine, which has just been approved for younger age groups (40+, when it was previously 55+).

A spokeswoman for Health Minister Christine Elliott said on Sunday that the AstraZeneca shot would be offered to younger age groups starting Tuesday, at pharmacies and 'some primary care settings.'

The statement from Ford's office reads, "As we look to expand our rollout of AstraZeneca to younger age groups and into more pharmacies, any delays to vaccine shipments would be devastating for Ontario right now as we battle the third wave of this pandemic. While we seek to confirm this information, the premier is redoubling his efforts to secure more vaccines by directly reaching out to our international allies for any available supply.

As part of that outreach, he has already spoken with Canada’s ambassador to Denmark and the Consulate General of the United States, both of whom are advancing our request to purchase any additional supply of AstraZeneca to their respective administrations. Our officials have already reached out to Norway’s ambassador, and the premier will be speaking to the EU ambassador to Canada as well as the High Commissioner of India later today to ask for any extra AstraZeneca vaccines."

Meanwhile, the federal government says it expects about 1 million shots of the Pfizer-BioNTech vaccine to arrive this week, as the two pharmaceutical firms continue delivering doses on a regular schedule.

The government has blamed a backlog in quality-assurance testing for the reduction, which will cut the number of doses Canada can expect this month in half and postpone their delivery by at least a week.

Ottawa is not expecting any deliveries of the Oxford-AstraZeneca or Johnson and Johnson vaccines over the next seven days.

BEYOND LOCAL: How gratitude for nature can reduce the desire to over-consume
May 13, 2021 9:25 AM
Comments