ONTARIO: Province to allow for more testing of automated vehicles

The announcement was made Tuesday by the transportation minister at the University of Waterloo
Jan 22, 2019 2:00 PM By: Blair Adams 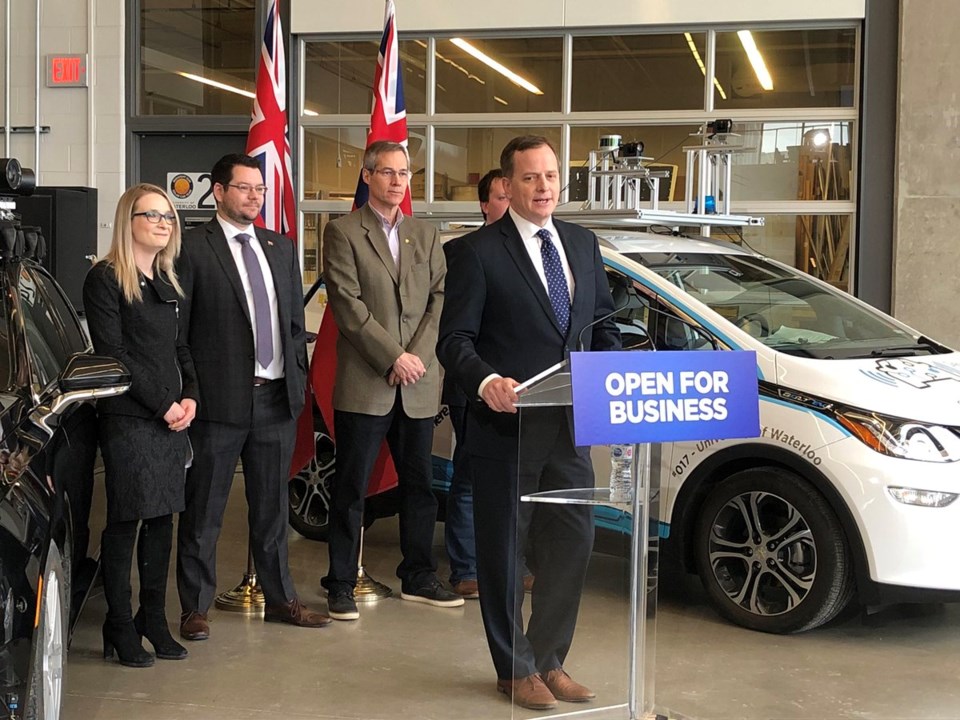 The province has updated its Automated Vehicle Pilot program, which it says will allow for more testing of emerging technologies.

The announcement was made Tuesday by Transportation Minister Jeff Yurek at the Sedra Student Design Centre at the University of Waterloo.

It means vehicles equipped with higher levels of automation (Society of Automotive Engineers (SAE) Level 3 technology) can be driven on Ontario roads once they are eligible for purchase in this country.

"Today there's over a hundred Ontario companies, as well as other universities and other organizations, active in this sector. The organizations represented here today ... are pushing the limits of innovation, stimulating economic growth and contributing to job creation." Yurek said.

He added that Ontario is leading the nation in testing, developing and bringing automated vehicles to market.

The managing director of the Waterloo Centre for Automotive Research (WatCAR) at the University of Waterloo said this will keep Ontario at the forefront in terms of the testing they're allowed to do on public roads.

"There are some jurisdictions in the U.S. who are contemplating doing what was announced here today. There are others ... already with the provisions in the place in the United States, but Ontario is the only jurisdiction you can legally drive and operate an autonomous vehicle on a public roadway in Canada," Ross McKenzie told 570 NEWS.

He said they want to reduce fatalities and collisions, adding 90 per cent of crashes are caused by human error.

"As we look to reduce fatalities and accidents, technology is going to help us take human error out of the equation as a variable." McKenzie added.

The University of Waterloo has been part of the autonomous vehicle pilot program since 2016.

BEYOND LOCAL: Coronavirus misinformation is spreading — what is Canada doing about it?
Aug 8, 2020 9:25 AM

BEYOND LOCAL: The coronavirus exposes the perils of profit in seniors' housing, expert says
Aug 7, 2020 8:55 PM
Comments
We welcome your feedback and encourage you to share your thoughts. We ask that you be respectful of others and their points of view, refrain from personal attacks and stay on topic. To learn about our commenting policies and how we moderate, please read our Community Guidelines.

About the Author: Blair Adams

Blair is the Community Editor at KitchenerToday.com
Read more