In the first installment of our bi-weekly arts and culture feature, we turn the spotlight on Leslie Fournier; 'I have a relentless drive to create something interesting'
Feb 25, 2020 10:15 AM By: Anna Proctor 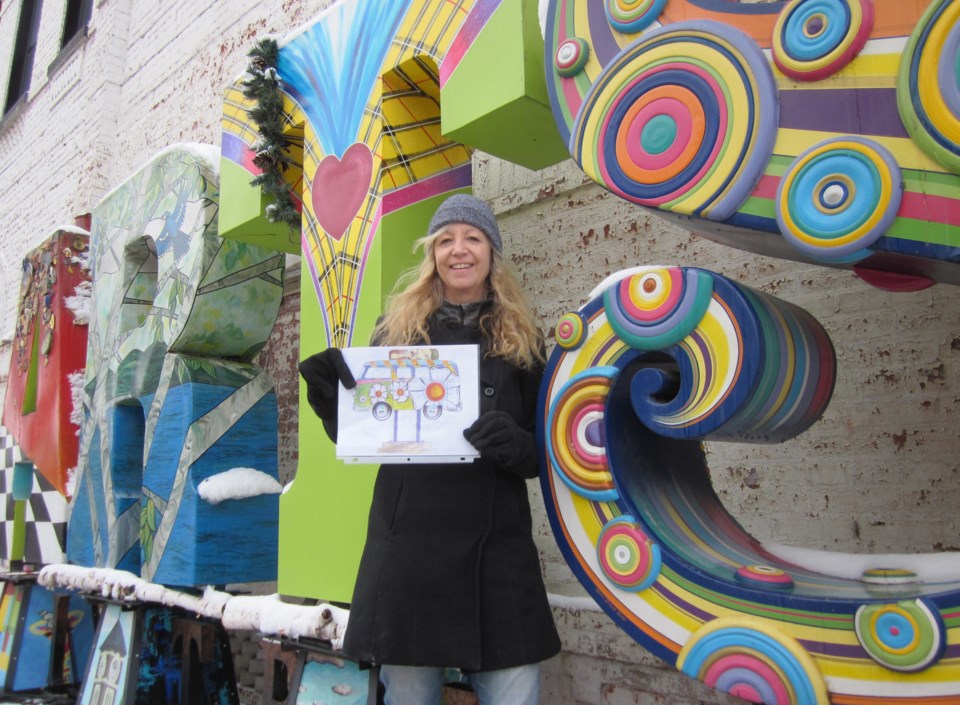 Leslie Fournier, the pioneer behind Streets Alive! is shown in the Peter Street Arts District showing off the theme of this year's street art project: Hippie vans. Anna Proctor/OrilliaMatters

Fueled by a drive to create something interesting, Leslie Fournier has done just that over the last decade in Orillia.

Fournier grew up in Napanee and was into sports and outdoorsy fun, a tomboy who decided to get a university degree in physical education - her favourite activity.

However, in her last year of high school, she had the opportunity to go to school in Switzerland; her adventurous spirit and curious mind prompted her to pursue that opportunity.

“Being in Switzerland, and my travels in Europe after university, opened up my mind," recalled Fournier. "These days, kids have the Internet and can see the world that way, but I was a small-town girl in the 80s; I had never seen anything like the streetscapes of Europe, with art, statues, fountains, cafes. It was an eye-opening and pivotal experience for me.”

That year in Europe caused Leslie to add French to her degree in university, and awakened a love of travel and adventure in this small-town girl.

After university, she got a job with Butterfield and Robinson, THE adventure travel agent in those days, and got to travel, hike, and bike all over the world, including New Zealand and Africa.

“So, I was exposed to lots more streetscapes and I really do think that’s where the public art bug was planted in my mind.”

Fast forward to many years later, in Orillia.

“I was a teacher and I enjoyed teaching, but I really had the entrepreneurial spirit in me, and just felt that I was meant to be doing something else," said Fournier.

So, in 2001, she opened Jack and Maddy’s, a toy store on Mississaga Street, named after her two children. That was busy and fun for awhile, but then that curious mind got going again.

“I really paid attention to what was outside the store window, the street level. I just felt like there wasn’t enough colour or interest there and I started wondering, well, what can we do about that?”

Fournier started Googling public art, vibrant downtowns, and a program in Nanaimo B.C. popped up: banners in the street.

“And I thought, well that worked there, I bet we can make it work here.” That’s how the first Festival of Banners in downtown Orillia came to be, in 2007.

“That first year, we had 150 banners on poles throughout the downtown," explained Fournier. "There was enormous uptake from the artists and all kinds of people, the Downtown Orillia Management Board (DOMB), the city. It was hugely successful and did add a lot of colour to the street.”

She ran the festival for three years, before handing it off to the Orillia Museum of Art and History. Her curious mind had turned in another direction.

“After three years, I decided we needed even more and wanted a bigger public art program," said Fournier, who, again, started Googling public sculptures, sculptures in downtowns. She discovered Moose in the City, a successful street sculpture project in Toronto.

"This was when I also connected with Charles Pachter. I read that he had done a moose, and that he had a connection to our area and decided to pursue him to be part of our street sculpture project," said Fournier of the world-renowned artist who now calls Orillia home.

"That first year, I never thought it would turn into what it is. I was just focused on one year, and making it the best it could be.”

That year, 2010, was the 50th  anniversary of the Mariposa Folk Festival - and the 10th anniversary of its return to Orillia, so she decided it would be fitting to have the street sculptures reflect that theme; Guitars on Parade was born in homage to the folk festival.

She set her sights on 50 sculptural guitars, to mark the 50th anniversary. Once again, the city, artists, DOMB, and local businesses jumped on board and Streets Alive! was born.

“I did a visual presentation at a breakfast with lots of pictures of street art, the banners, etc. and signed 12 sponsors right there after the breakfast. That’s when I thought, yeah, we’ll get to 50," said Fournier.

Ten years later, with vibrant, themed street sculptures created each year, each paying homage to some part of what makes Orillia special, it’s the 60th anniversary of Mariposa and “we have come full circle," she said.

"This will be the last year of new street sculptures, because we have a great variety of art we can put out on the street every year now," said Fournier. "This year will be hippie vans, because Mariposa started in the 60s, and there is still a hippie van culture there now in the camping area.”

Uptake has been wonderful as always, and Fournier is shooting for 30 van sculptures, because “they are massive, six-and-a-half feet across and five feet high.” To date, about half are sponsored, so things are well on the way.

She was asked what made her think she could pull off something so unique and popular each year.

“I think it was, I have a relentless drive to create something interesting…and not taking no for an answer," she explained. "It's about not being afraid. I just kept thinking, of course we can do it.”

This story was made possible by our Community Leaders Program partner. Learn more