A regional reopening plan could cause problems for area: Top doc

Medical officer of health concerned different reopening rules in other regions might encourage travel to our area
Jun 3, 2020 7:30 AM By: Erika Engel 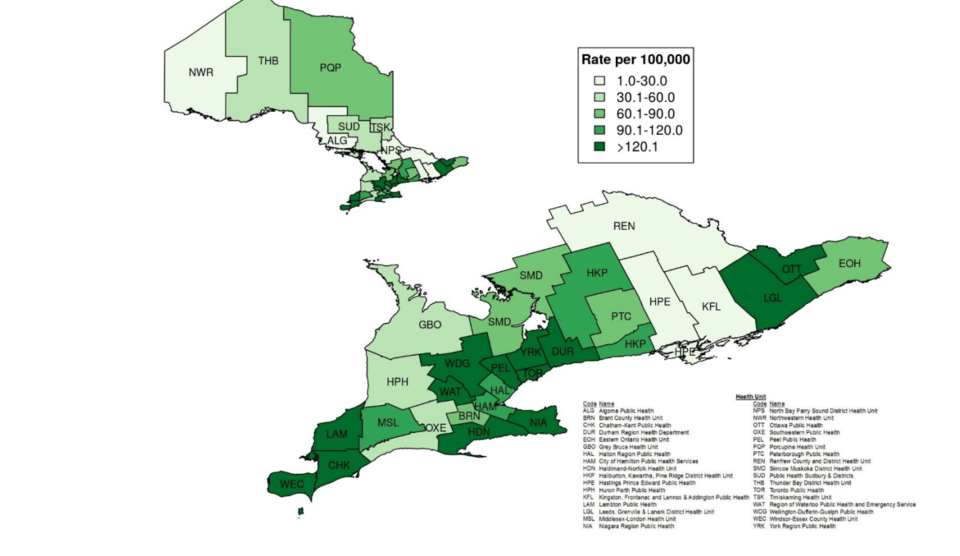 A map included in the Public Health Ontario epidemiological summary today shows the health units colour coded by incidence rate, the higher the rate, the darker the green. Screen shot

With Premier Doug Ford teasing a possible regional approach to reopening the province, this region’s medical officer of health is concerned that will mean more travel throughout Ontario.

Ford was asked about a regional reopening approach on Friday during a press conference and again yesterday (June 1). He said the province was looking at a different approach for Toronto, Hamilton and the Greater Toronto Area where numbers of infection are higher.

Cases from the GTA make up 66 per cent of Ontario’s total number of cases confirmed to date.

Ford said a regional approach is complicated and the province is just getting input on it right now.

The doctor was concerned that allowing some regions to open more things than others might just encourage more travel.

“If we’re allowed to open services here that regions in the south are not, there could be the potential for drawing more people here to use those services,” said Gardner.

There is already some evidence of travel into and out of the Simcoe Muskoka region.

Gardner noted there have been another 52 positive test results for individuals who were tested in Simcoe-Muskoka Region, but reside in another region.

There are 16 people whose primary address is outside the region who have tested positive and are recovering within the Simcoe Muskoka district.

Simcoe-Muskoka region shares a direct border with five other health units; all but one of them have a higher case incidence.

In total, there have been 7,735 cases confirmed in health units bordering Simcoe Muskoka, and all but one neighbouring region have higher case incidences.

Simcoe Muskoka District Health Unit has confirmed 480 cases of COVID-19 in the region, which is an incidence rate of 81 cases per 100,000 population.

There are also nearby regions within a two-hour drive of Simcoe County that have confirmed another 13,025 cases.

While recovery rates vary in each public health unit, Public Health Ontario has reported 78 per cent of cases in the province are now considered recovered.

The numbers listed above are total number of confirmed cases to-date, and have been reported by Public Health Ontario.