City council modifies its meeting schedule in wake of pandemic

Committee and council meetings will now be held on same day; 'I think this is completely acceptable under the circumstances,' says councillor
Apr 13, 2020 11:45 AM By: Dave Dawson 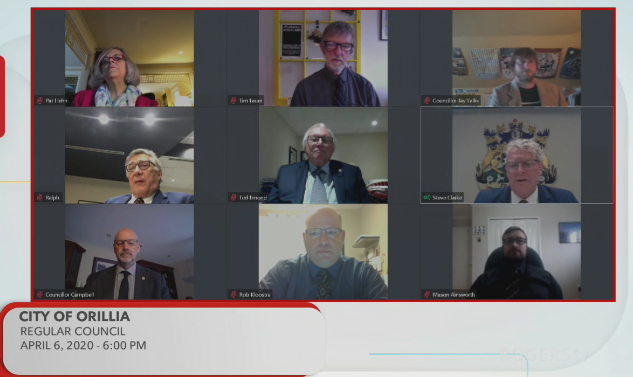 When Orillia Mayor Steve Clarke declared a state of emergency on March 20, business as usual became a thing of the past.

Essentially, that declaration put power over any local decisions related to the global pandemic in the hands of four people: Fire Chief Brent Thomas, the mayor, CAO Gayle Jackson and Jennifer Ruff, the city’s director of business development and communications.

That quartet comprises the city’s Emergency Management Committee which has been meeting daily, often multiple times daily, to stickhandle the municipality through these strange times.

But, in the midst of all that, city business, albeit on a much different scale than normal, continues.

And while city council can no longer meet publicly - gatherings of five or more people are not permitted anywhere in Ontario - there have been several virtual meetings to keep elected councillors up to date. Those meetings have been live-streamed and broadcast on Rogers TV so the community can also stay abreast of what’s happening.

As a result of that decision, city council will hold council committee meetings and council meetings back-to-back on the same day over the next few months.

Coun. Mason Ainsworth said such a protocol is one he would not normally agree to.

He said having a week between committee meetings and council meetings provided an opportunity “for sober second thought” and allowed the community to weigh in before council made a final decision on a matter.

“But, with all due respect, we are in quite different times,” said Ainsworth. “I think this is fine as a temporary fix from April to July.

“We are going through big changes as a city, as a province and a country,” said Ainsworth. “I think this is completely acceptable under the circumstances.”

Coun. Jay Fallis tried to persuade his fellow councillors to move the start time of the meetings from 4 p.m. to 6 p.m., but that failed.

As a result, council committee meetings will begin at 4 p.m. followed by council meetings immediately following; essentially that allows final decisions to be made in one sitting. However, if council chooses, it could defer a final decision to a later meeting.

The new schedule of meetings is as follows:

All meetings start at 4 p.m. and will be live-streamed and shown on Rogers TV. Agendas for these meetings are typically published on the city’s website on the Friday before the meeting.

There is still an opportunity for citizens to provide input into municipal decisions. Even though it’s no longer possible to have an open public forum at the end of city council meetings, there is a mechanism in place for people to have their say.

You can email your questions/concerns/thoughts to mwilliams@orillia.ca and they, if appropriate, will be read out publicly at the end of the council meetings on those dates.

Orillia snowbirds walk across border through 'loophole' after months in Mexico
May 7, 2021 2:45 PM

Business is blooming as people flock to local garden centres
May 6, 2021 1:45 PM
Comments