Closing downtown streets to traffic not off the table, but unlikely

Task force looking at multiple options, including opening up public realm; 'Whether it would work here, I don’t know. That’s what we need to figure out'
Jun 2, 2020 12:30 PM By: Nathan Taylor 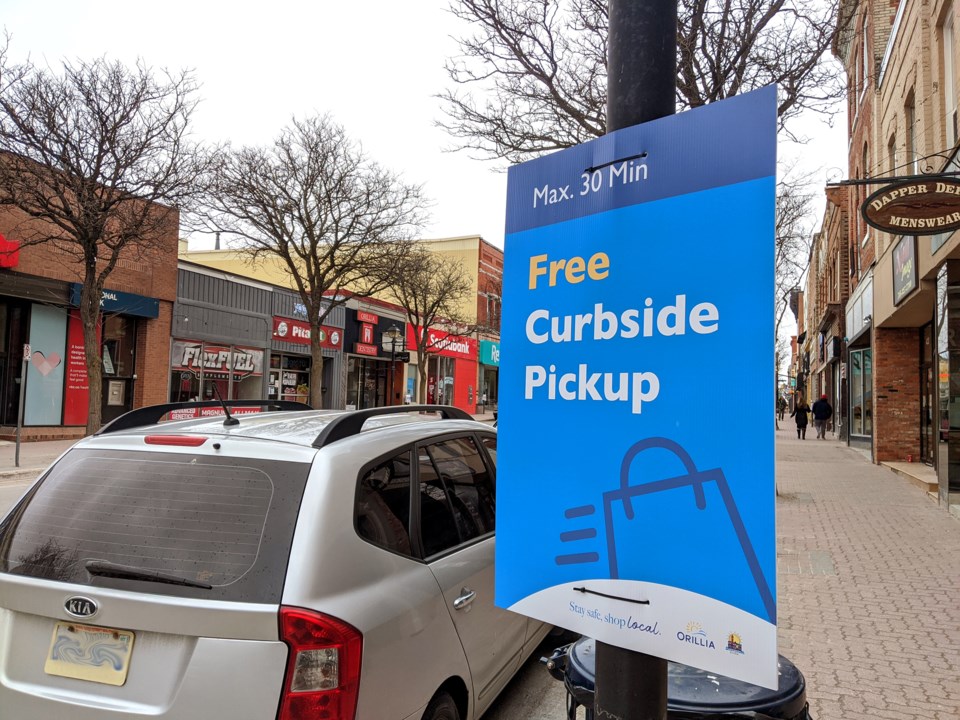 The City of Orillia has adapted its on-street parking to make it easy for the community to shop locally and pick up orders at downtown stores and restaurants. Contributed photo

Closing downtown Orillia streets to traffic to allow for more physical distancing as businesses reopen is not off the table, but it won’t be without opposition.

The Downtown Orillia Management Board is considering surveying its members to see what they think of the idea, but board chair Michael Knight doesn’t think it would fly with the majority of business owners.

“They’re not supportive of road closures,” he said of those who have contacted him. “We’ve been doing road closures for a long time (for festivals and sidewalk sales). Whenever we do, after it’s over, we survey our membership to see how they did and what they thought about it.

"We always have quite a majority say they did less business. Some would prefer not to do it at all," said Knight.

When discussing ways to help merchants get back in business as restrictions ease, the popular opinion among board members at a recent meeting was to get back to as close to a “normal routine” as possible, Knight said.

The city’s economic recovery task force isn’t specifically looking at street closures, said its chair, Coun. Ted Emond. It is looking at three initiatives to help businesses when they reopen.

One is to work with individual sectors to help them adapt to provincial guidelines. The second will be a communications campaign. The third will look at ways to use “public space,” such as sidewalks and parking spots, “to expand the footprint of retail operations to allow for more customers” with physical distancing, he said.

That might be easier for downtown businesses than for those in, for example, west Orillia. If some businesses out there wanted to expand a patio space, it could mean encroaching on a parking lot that is private property.

Downtown Orillia is a different story, Emond said, suggesting the city could help businesses that want patio space. The city charges businesses a fee for the use of sidewalk space or parking spots.

“That becomes a bureaucratic obstacle, so that might be an area the task force looks at,” he said.

While he feels it is “premature” to look at closing entire streets, Emond said the task force has received 15 to 20 letters or emails from residents — some of them, merchants — who are in favour of using the “public realm” for something other than traffic and parking.

“Whether it would work here, I don’t know,” he said. “That’s what we need to figure out.”

OSMH CEO implores citizens to heed the call to wear masks
Jul 10, 2020 4:00 PM
Comments
We welcome your feedback and encourage you to share your thoughts. We ask that you be respectful of others and their points of view, refrain from personal attacks and stay on topic. To learn about our commenting policies and how we moderate, please read our Community Guidelines.