Without intervention, councillor fears 'we will see a significant number of downtown merchants close and the downtown will be devastated for years to come'
Jul 2, 2020 4:30 PM By: Dave Dawson 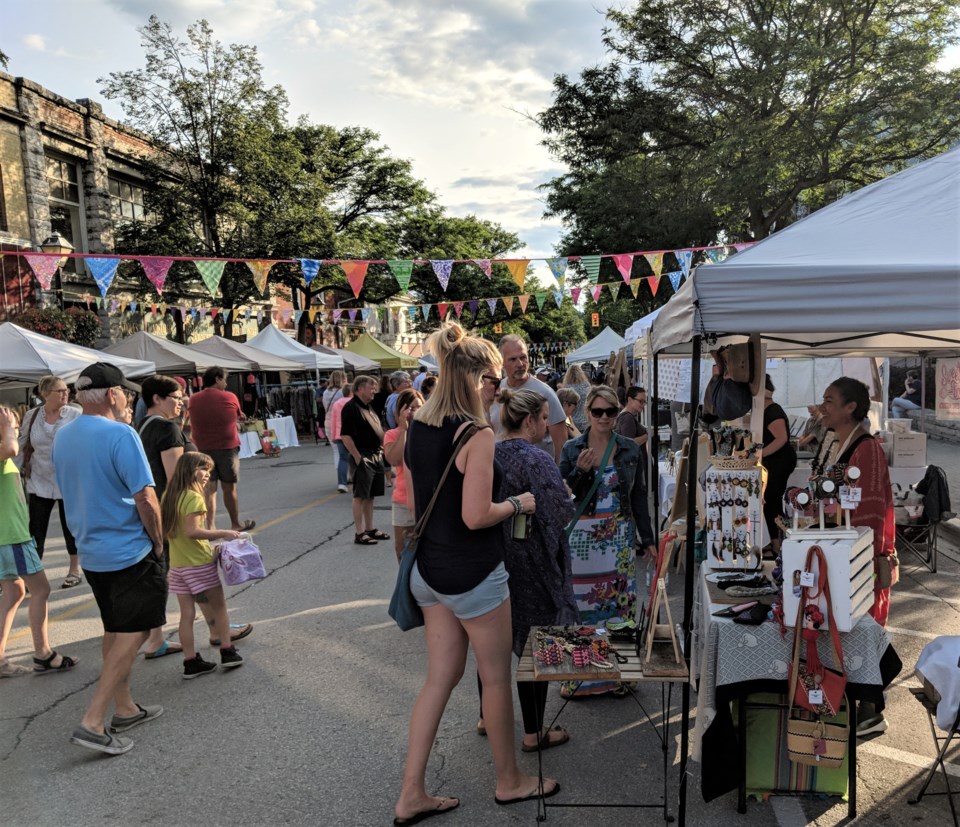 The Night Market drew many people to the downtown in 2018. Council is looking to close Peter Street and Mississaga Street on Friday evenings - to start - to give local enterprises the opportunity to expand into the streets to help offset the consequences of the COVID-19 pandemic. Dave Dawson/OrilliaMatters File Photo

In an effort to help downtown businesses amid a “devastating” pandemic, city council has voted to green-light a “modest” plan to close downtown streets to give businesses more room to operate in a COVID-19 reality.

If that proves successful, the initiative could be expanded to Saturdays. It’s likely to last until Labour Day.

The idea, which has the support of the Downtown Orillia Management Board (DOMB), was recommended by the city’s Economic Recovery Task Force (ERTF) that was struck in the wake of the pandemic to support local businesses.

Coun. Ted Emond, who chairs the ERTF, said the plan has been carefully considered to balance safety concerns with economic worries from struggling downtown merchants.

“There is no question we’re all concerned about our safety, but at the same time, we have to balance that with the economic realities of ensuring we do everything we can in a safe manner to allow our downtown core businesses to succeed,” said Emond.

He said the proposal is “modest and allows us to expand or constrict” the parameters based on response and feedback.

Mayor Steve Clarke and all councillors, with the exception of Coun. Jay Fallis, ultimately voted to support the plan.

The proposal carries a $30,000 price tag and money will come from the $1-million emergency pandemic relief fund the city instituted a few months ago.

Emond noted many downtown businesses have small storefronts which make physical distancing impossible. The plan will allow businesses to expand into the street, creating a “Friday night experience” where people could cycle or walk downtown with their family and enjoy a “safe” night out.

Campbell, a member of ERTF, said his first inclination was to close the entire main street on weekends.

“I’ve heard many times over the years that the main street should be closed to allow pedestrian traffic,” said Campbell, who has enjoyed such experiences in other locales.

“However I don’t own a business in the downtown core,” said Campbell, noting the importance of consultation and discussing options.

Campbell said it’s vital for council to listen to the DOMB, which “represents downtown business owners. We should follow their recommendations.”

The DOMB surveyed its members and endorsed the plan to phase in the concept, starting with Friday nights.

“It may not be perfect, but I think it’s the ideal starting point,” said Campbell, adding it will be vital to monitor the initiative to gauge its success.

Coun. Rob Kloostra wondered why the DOMB couldn’t foot the bill, estimated at $5,300, for its staff to help with logistics including placement of barriers, ensuring there is space for emergency vehicles and other duties.

Laura Thompson, the city’s manager of real estate and commercial development, said the DOMB will likely be able to help offset some of the costs but they don’t have funding for staffing.

“The DOMB may be able to support other elements of this plan (such as marketing) but not staffing,” she noted.

Coun. Jay Fallis was the lone voice of dissent.

“(This) would essentially create an event downtown,” said Fallis, adding he had concerns about large groups and physical distancing.

He also said there needs to be some vehicular access to the street.

"I am in favour of opening up Mississaga a bit more to allow for more walkability and allowing stores to expand in," said Fallis.

“My position is if you’re going to do it, either (do it for) multiple days or around the clock so it doesn’t create an event-type scenario,” said Fallis. “If we weren't in a pandemic I’d be in full support.”

Emond conceded it’s a “real challenge to balance” safety concerns. But he said this is an “Orillia solution” that is desperately needed.

“Our downtown is absolutely critical to the city’s economic future as are all businesses, but the downtown is core,” said Emond.

He said the downtown is “suffering mightily,” adding if the pandemic continues “we will see a significant number of downtown merchants close and the downtown will be devastated for years to come.”

“The downtown is the heart of our community and (we need to) do everything possible to make sure it survives this pandemic,” he said.

Coun. Tim Lauer had concerns about the $12,500 plan to “animate” the downtown during the street closures, citing the cost and concerns about creating large gatherings of people.

Lauer also was concerned about the 4 p.m. start time, saying he had received feedback from some merchants seeking a 6 p.m. start.

Thompson said the timing was “primarily due to feedback from businesses ... restaurants in particular.” The time was also supported by the DOMB.

To “appease some of those retailers,” Thompson noted curbside pickups will be moved to side streets to accommodate those enterprises.

Coun. Mason Ainsworth applauded the ERTF and staff for their “hard work” in developing the plan.

“A lot of people think you can snap your fingers and make everything perfect,” said Ainsworth. “In the real world, not every solution is going to make everybody happy. I do think this is a good solution,” he said, adding it’s smart to phase in the elements and to consult with downtown merchants.

“This is not just an overnight decision,” said Ainsworth, who added he was “really impressed with the work” of the committee.

Some of the money earmarked for this plan will also go to create five sanitization stations which would be located at:

Each station would consist of a table, signage regarding public health guidelines and COVID-19 preventative measure guidelines, a self-screening check, and an alcohol-based hand sanitizer with pump.

Washrooms for restaurant customers will be provided to the public by the businesses in accordance with public health guidelines.

The City of Orillia public-use washrooms located in the downtown area are within facilities that remain closed (Orillia Opera House and Orillia Public Library). As these facilities begin to re-open, staff will assess the opportunity to potentially utilize these public spaces.

Here are the results of a recent survey undertaken by the DOMB: