Union has pleaded with casino operator to temporarily close facility; MP says employees 'have a right to be concerned' about the risks
Mar 14, 2020 1:30 PM By: Dave Dawson 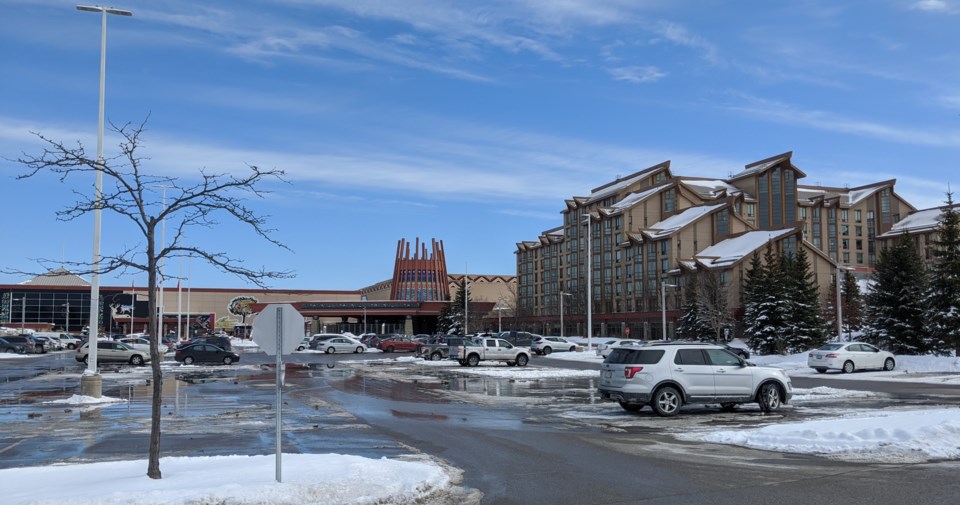 The union representing Casino Rama employees wants the gambling facility to close indefinitely due to concerns about the COVID-19 virus. Casino's management is balking at the idea. Dave Dawson/OrilliaMatters

It appears gamblers will be able to continue to roll the dice and take their chances at Casino Rama despite widespread concerns about the global COVID-19 pandemic. At least for now.

Unifor, the union representing most employees at Casino Rama, has asked Gateway Gaming and Entertainment, the operator of the gambling facility, to shut down the casino.

The union is concerned for its front-line employees who could come into contact with someone carrying the pesky virus. Thousands of patrons visit the casino - many in buses from out of town - each day.

Corey Dalton, president of Unifor Local 1090, said he has spoken with union representatives from not only Casino Rama but Gateway Casino Innisfil, Pickering Casino Resort, Casino Ajax, and Great Blue Heron Casino about the issue.

In a statement on Facebook posted late last night, Dalton said union officials from each of those gaming facilities favour a shutdown.

But Gateway, apparently, has no plans to close the doors.

“At this point, none of the sites have any plans whatsoever to temporarily stop operations at these facilities,” Dalton said in a statement.

“The province of Quebec has shuttered all of their casinos in response to the outbreak - this is the reasonable response until we know more about the virus' potential,” said Dalton.

He said the union asked the company about potential enhanced measures to protect workers. “None of the workplaces were able to provide any examples (such as) increased cleaning, social distancing, screening for symptoms, sanitation at tables and/or machines,” said Dalton.

“To say I am disappointed in the response of these employers would be a dramatic understatement,” Dalton posted. “COVID-19 is an international epidemic, to which most of the scientific community still does not remotely understand.

"The only consensus from the medical community is that avoiding contact with groups of other people is the most effective way at staying safe and reducing the virus' spread.”

Simcoe North MP Bruce Stanton said his office has fielded calls from Casino Rama employees concerned about the working conditions at the casino.

“They have a right to be (concerned),” Stanton told OrilliaMatters Saturday.

“There is an issue here. It is a regulated space and it behooves the Province of Ontario to ensure (Gateway) is getting serious about this and/or stipulating” new protocols to protect staff and customers.

He suggested Gateway could remove stools at slot machines and remove chairs at gaming tables to adhere to social distance concerns. He said cleaning regimes should be enhanced so that customers cannot access slot machines until they are sanitized.

“They have to change their practices,” said Stanton. “To think they can just carry on, sort of business as usual … is ludicrous.”

In a phone conversation Saturday, Dalton told OrilliaMatters he is no longer able to comment on the issue. He referred comments to Unifor’s national office.

An email to Natalie Clancy, Unifor’s Director of Communications, was not returned in time for this story.

Multiple calls and emails to Rob Mitchell, the spokesperson for Gateway Entertainment, also were not returned.

According to an internal memo obtained by OrilliaMatters late Saturday afternoon, the Couchiching Court Buffet and the Willow Restaurant outlets have been shut down.

"Based on the current precautions being recommended by the Public Health Agency of Canada and the reduction of business associated with required or recommended bans on concerts and events," Gateway does not support the opening of the eateries.

The Tim Hortons inside the casino has also reportedly closed.

Dalton, in his Facebook post, said the union is “continuing to lobby the employers and the government to take the safety concerns of Local 1090 members seriously; to provide measures so that workers don't have to choose between paying their mortgage, rent, bills - or risking their health.”

He also reminded workers to be vigilant.

“Please remember your rights under the Occupational Health & Safety Act. If any worker feels their safety is in jeopardy, immediately inform your supervisor that you are exercising your right to refuse unsafe work under Section 43 of the Act.

“You have the right to continue to refuse work that you believe is unsafe, without fear of reprisal or discipline, until an Inspector from the Ministry of Labour determines otherwise.”

“Visit your doctor and express your desire to 'self-quarantine' for 14 days to help prevent the potential spread of this virus,” Dalton said in his post. “You will need to provide a medical note to the employer in this instance. Persons who get medical direction to self-quarantine can apply for EI benefits which currently have no waiting period."

Dalton said he is disappointed in the way this has unfolded. He called on the casino operator “to do the right thing: temporarily pause operations at your facilities and ensure the health and safety of our members is protected.”

At one point, the casino turned a profit of about $1 million a day.

While increased competition has hurt the local gambling facility, it has been called the "jewel of the crown" of Ontario's resort casinos.

The hotel and entertainment centre have helped cement the casino's place as a popular destination in Ontario.

Since opening in 1996, the casino had never closed its doors to the public - until last month. On Feb. 26, the casino received a bomb threat. As a result, the casino, hotel and entertainment centre were evacuated.

The facility was shut down for about four hours before it was reopened.