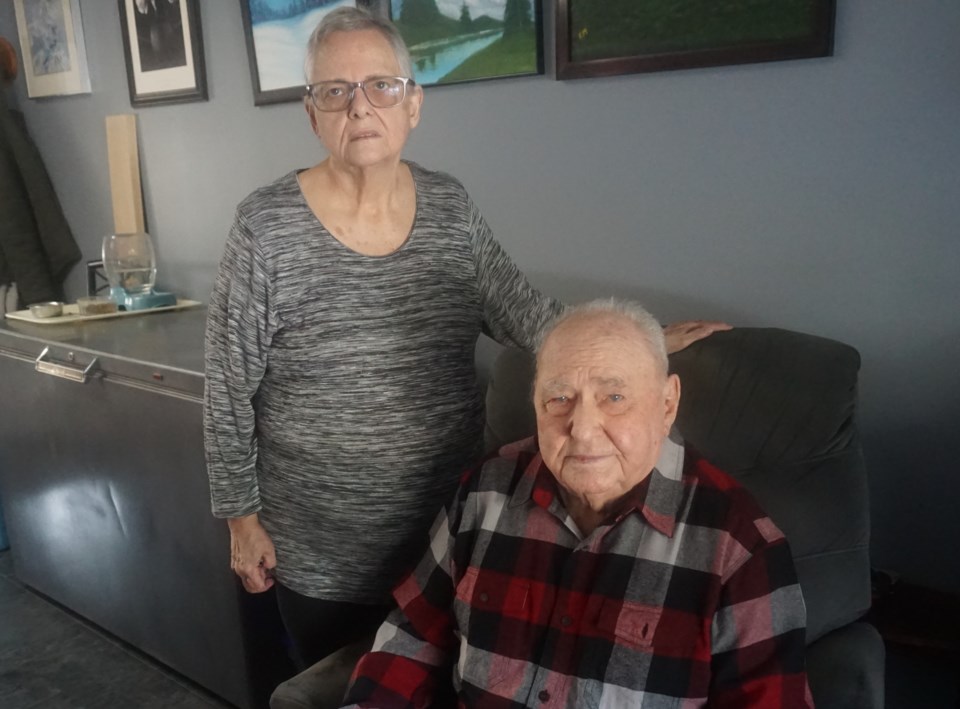 Earl Martin is pictured with his daughter Mary-Ann Canning in her Victoria Harbour home. Andrew Philips/MidlandToday

Earl Martin thought he had reached the end of the line.

Alone in a hospital bed with no idea where he was, the 93-year-old describes just wanting to curl up into a ball and die after waking up and finding himself in Georgian Bay General Hospital’s isolation unit in early May after testing positive for COVID-19.

“It felt like solitary confinement and was confusing,” says Earl, who wipes his eyes occasionally as he painfully recalls his feelings of anxiety, despair and loneliness.

“You feel like the end of the world has come. You just want to curl up and say ‘game over.’”

Stuck in a small, windowless room, Earl wasn’t allowed to see his daughter Mary-Ann Canning for a time after being admitted, which only increased his depressed state with him feeling more alone and frightened since he didn’t know where she was.

“The hardest thing was not knowing where my daughter was," Earl explains during an interview at his daughter’s Victoria Harbour home.

"She was always by my side through everything, and I couldn’t understand why she wasn’t there.”

Mary-Ann adds that that had to be the hardest thing about the pandemic's early stages: Relatives left in hospital with little or no contact with the outside world.

“When you’re that sick, that’s when you really need your family,” Mary-Ann says. “It’s really hard on the family as well because you can’t be with your loved one.”

A widower, Earl is now back living again at Waubaushene’s Bayview Retirement Home, which went into lockdown after the pandemic hit in March. A few weeks later, Earl tested positive for COVID-19 and was quarantined to his room.

At first, Earl’s only symptom was a slight fever for a day or so, but after eight days, it became much worse and Earl was admitted to hospital.

The grandfather and great-grandfather says he has little recollection of falling ill and the long journey back to health that included more than three weeks in hospital.

“It just hit all of a sudden and truthfully, I don’t remember anything,” Earl says. "I don’t even remember leaving my room (in Waubaushene).”

And it’s been a long journey back to health.

“He couldn’t feed himself, he was so weak and he couldn’t taste anything,” says Mary-Ann, recalling her father’s physical state during those early days.

But doughnuts have always been a favourite of her Dad’s so she began to bring them to the hospital for him as well as smoothies.

The trend caught on and soon hospital staff were bringing in the sweet treats.

“They knew he would eat them,” Mary-Ann explains. “Dr. (Natasha) Pinto was his doctor and she’d sometimes bring in doughnuts for him, too.”

And from those early hospital days, things got progressively better for Earl, who was eventually connected to his daughter again through a tablet that gave him some peace of mind knowing there were still people who cared about his well-being outside of the hospital walls.

As his condition improved, Earl was eventually transferred to a larger room and given activities to help pass the time while also being able to receive visitors.

“He started coming along really well,” says Mary-Ann, who like Earl can’t say enough good things about the care he received while in hospital that saw staff remain by his side and comfort him through the worst when visitors weren’t permitted.

“The nurses gave us a report every day and sometimes twice a day. They were fabulous.”

And finally in early June after four weeks in hospital, staff lined the halls and cheered as Earl was discharged.

Earl adds:"Even though I never saw their faces (because of the masks), I know the staff truly cared about my well-being and my family's.”

An easily likeable man, Earl spent a great deal of his life working; having started at the age of 12.

“I had my licence at 14 and was driving a tow-truck at 15,” he says, adding his father’s garage repaired police cruisers and he would drive the cars to and from the station despite being too young to legally drive. “I was delivering cruisers right to the police station.”

He eventually started working as a mechanic before finding a place at Harding Carpets in Collingwood.

He and his wife Elva eventually settled in Wasaga Beach upon retirement, but when Elva took a nasty fall years ago, Mary-Ann, who is their only child, felt it would be best if they came to live with her family in Victoria Harbour.

After nearly five years in Victoria Harbour, Earl and Elva moved to the Waubaushene retirement home in the summer of 2017.

“My Mom passed away a few months after that,” says Mary-Ann, adding she and her husband Jeff feel very fortunate to have both the hospital and the Waubaushene retirement home looking out for their Dad.

“He gets spoiled. They treat him great there.”

WATCH: Province to expand digital services with new action plan
Oct 19, 2020 12:30 PM
Comments
We welcome your feedback and encourage you to share your thoughts. We ask that you be respectful of others and their points of view, refrain from personal attacks and stay on topic. To learn about our commenting policies and how we moderate, please read our Community Guidelines.