On eve of province-wide cannabis shop closures, patrons flock to One Plant 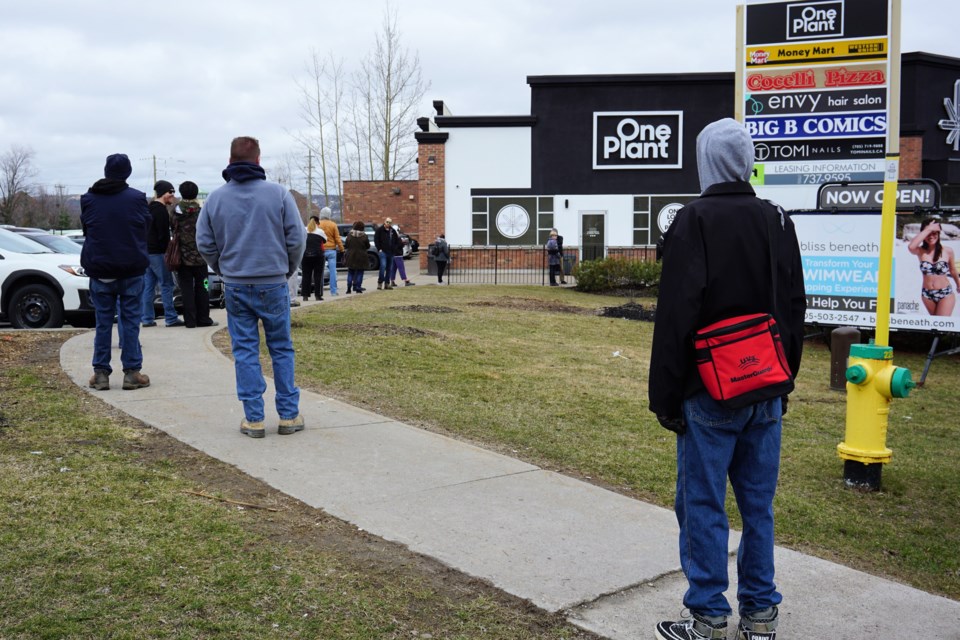 The line-up of patrons waiting to stock up on cannabis on Saturday stretched from One Plant on Essa Road in Barrie to the on-ramp of Highway 400. Customers flocked to the store due to the news that cannabis retail stores are now deemed non-essential businesses and would be closing as of Saturday night. Jessica Owen/BarrieToday

They only opened a short three months ago, but tonight as of 11:59 p.m., One Plant will close its doors.

Barrie's only provincially licensed marijuana retailer will be closing temporarily due to the provincial government’s announcement on Friday that it would be modifying its list of essential businesses in light of COVID-19 concerns, and cannabis retailers were not included on the updated list.

So on Saturday, hundreds of cannabis fans flocked to the store to stock up before it was too late.

In mid-March, the Essa Road shop closed amid concerns one of its employees had potentially been in contact with someone who had contracted COVID-19, but reopened on March 23 with new policies in place to protect patrons.

Grenville said that after that scare, it took about four or five days for the store to ramp up again business-wise but that otherwise, the store has been consistently busy.

Grenville said he has been letting patrons know that cannabis is still available via the Ontario Cannabis Store website if they run out and need more before the stores re-open.

“They can always order online and go to a post office to pick it up, which is still a good and safe option rather than turning to the black market,” he said.

Grenville thinks the government does have good intentions with the closures.

“I understand where they’re coming from, from a social responsibility standpoint. I can get behind that, but it does feel like a bit of a double standard. I’m not going to harbour anger or resentment over it though,” said Grenville.

Emily Lemieux waited to make a purchase at the store on Saturday afternoon in a line-up that stretched from the doors of the shop down Essa Road, nearly reaching the Highway 400 on-ramp.

“I don’t think (closing the stores) is a good idea. I think it will make a lot of people go a little crazy and it means bigger crowds flock to the stores,” said Lemieux. “We’re stuck at home and there’s nothing else to do. You might as well smoke.”

Alec Landsberg said it was his second time ever attending the local shop.

“I have enough, but you never know. I’m just here to get a little bit extra,” he said. “It’s nice I don’t have to go to downtown Toronto anymore.”

Landsberg said he was disappointed in the government’s decision.

“Are they shutting down LCBOs and Beer Stores? No, they’re not. It seems a little bit biased,” he said. “Especially for an individual like myself. I don’t drink because if I drink, I could get gout. So, this is my guilty pleasure.”

WATCH: Ontario Premier Doug Ford holds press conference
Nov 23, 2020 12:36 PM
Comments
We welcome your feedback and encourage you to share your thoughts. We ask that you be respectful of others and their points of view, refrain from personal attacks and stay on topic. To learn about our commenting policies and how we moderate, please read our Community Guidelines.