LETTER: Returning statue is like 'putting our version of a Confederate monument back up' 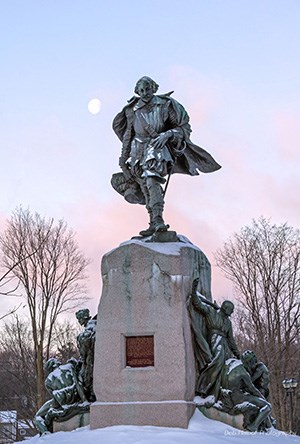 The Champlain Monument in Couchiching Beach Park before it was removed for restoration. Deb Halbot photo

I understand the Champlain portion of the Couchiching Beach monument is coming back, with construction slated to start in July, finishing in August.

I am overwhelmed by my disappointment. At a time when dozens of communities around the globe are tearing down their monuments to colonialism and white supremacy, we are putting our version of a Confederate monument back up.

This adds another level of hurt. Rather than doing nothing, we are spending time and money to maintain an oppressive status quo. Indigenous, Black and Canadians of colour have watched long-ago historical oppression transition into state-sanctioned systemic racism that affects how these groups are policed, access health care and earn a living.

To pretend that Champlain coming back without the First Nations figures is a compromise ignores the reality that we are erasing the Indigenous portion and prioritizing white history over an accurate accounting of history; Indigenous peoples inhabited the region for thousands of years before Champlain’s arrival.

Why wouldn't we put Canada's First People in the most prominent position possible?

Why not reinstall the Indigenous men at the waterfront and let Champlain be relegated to an unknown location to be installed at a future date to be determined, which is the current status of the First Nations figures?

If Champlain goes back, you have to acknowledge that this is not now and never was about history.

Of Champlain's known history, I can acknowledge that he was not a genocidal monster — he is well known for working with First Nations communities, but that doesn't mean he wasn't problematic or that we should resurrect him in our beloved park.

In his journals, he describes killing two chiefs with one bullet in a battle that left hundreds dead. Moreover, he actively spread ideologies that subjected Indigenous communities for generations.

I wouldn't compare him to Hitler but I also wouldn't put up a statue of him in Orillia's waterfront.

To Bruce Stanton, Jill Dunlop, Orillia's mayor and council and Parks Canada, I will say this: I recognize that a decision to not reinstall Champlain would not be well received — I have been party to the outrage that would bring over the course of the last year and it is ugly and it is hateful.

As leaders, I am asking you to stand up and speak against the current narrative. Articulate to the masses that putting the statue back actually erases the thousands of years of history before Champlain ever showed up.

Tell people that a decision to put it back up further traumatizes marginalized groups who face barriers because of the colour of their skin. You are this region's leaders — I am begging you to lead on behalf of people who may not look like you but are members of this community just the same.

Until you do that, you do not stand with Indigenous, Black and minority members of our region.

Before you jump to justify this harmful decision by bringing up the extensive consultation process that was undertaken, I ask you this: Who owns the table and who controlled who was invited to it? From speaking with people involved, I have gathered that ideas that didn't involve Champlain coming back were unwelcome from the beginning and that there was pressure to have him returned. If the onus is on those more vulnerable to make concessions from the outset, I question the legitimacy of your consultation process.

Now is the time for our governments to invest in the future we want rather than fighting to maintain a status quo that doesn't work for so many.

I want to invest in love and solidarity but find it hard when my leaders and the community at large refuse to acknowledge oppression, past and present.

I hope the decision to put Champlain back is reconsidered, but more than anything I hope that people who want to see the Champlain Monument re-erected in our recreational centre ask themselves: Why?