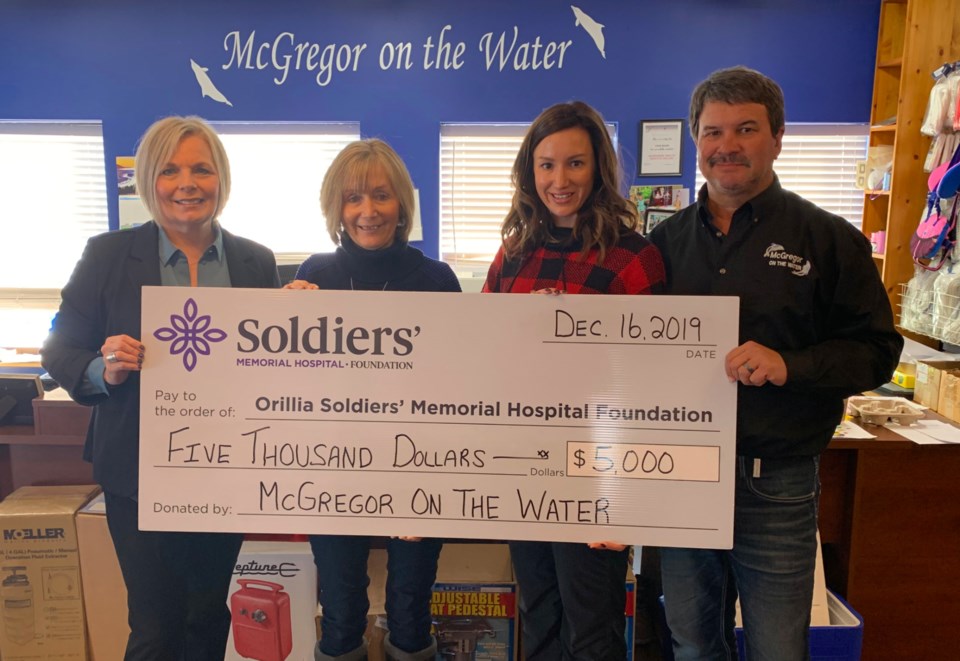 (L-R) Lisa Wanamaker, OSMH Foundation development officer, is presented with a cheque for $5,000, the proceeds from the 19th annual McGregor on the Water Customer Appreciation BBQ, from Linda Csumrik, vice-president, Erin Shaw, office and dock crew member, and Doug Csumrik, president of McGregor on the Water. Supplied photo

NEWS RELEASE
ORILLIA SOLDIERS' MEMORIAL HOSPITAL FOUNDATION
********************
The Csumrik family presented a cheque for $5,000 to Orillia Soldiers’ Memorial Hospital Foundation, the proceeds from their 19th annual McGregor on the Water Customer Appreciation BBQ fundraiser. The funds will support the purchase of a central patient monitoring system (CPMS) to benefit Soldiers’ youngest patients and their families.

Every year near the end of the summer, the Washago marina hosts customers, suppliers and friends to close out the boating season with a bang.

The annual event doubles as a fundraiser in support of children’s charities as a way for the family-run business to give back to organizations close to their hearts. Having spent time with her young daughter in Soldiers’ pediatric unit, Erin Shaw, McGregor on the Water office and dock crew member, understands what a CPMS would mean for the hospital. “When my daughter was admitted, I was afraid to leave her side even just to go get a coffee,” she said.

“A CPMS would mean that parents, like me, could relax just a little, knowing vital signs can be seen at the nurse’s station at all times.” A CPMS continuously monitors the vitals of all patients on the floor from one central location. The system tracks a patient’s respiratory rate, body temperature, cardiac output and more, allowing physicians and nurses to respond quickly to any changes in a child’s condition. Though the event began as a way to show appreciation to their boaters, it has evolved into a platform to highlight the incredible generosity of the McGregor community.

“This event is a ton of fun and a lot of work to put together,” said Doug Csumrik, president of McGregor on the Water. “When a new customer and a first-time BBQ attendee donates $500 to your cause, it’s pretty special.”

“It means so much to have former patients, or parents of former patients, initiate an event like this,” said Lisa Wanamaker, OSMH Foundation development officer. “It says a lot about the McGregor on the Water boaters that they are able to bring in such an incredible donation to improve care at our Hospital.”

The BBQ took place Aug. 24 and raised $5,000 for Soldiers’ and $3,000 for Toronto-based KRG Children’s Charitable Foundation through raffles, a silent auction and general donations. Next year marks the 20th anniversary of the event and the Csumriks' 20th year in business at McGregor on the Water.