A visual artist with a visual impairment 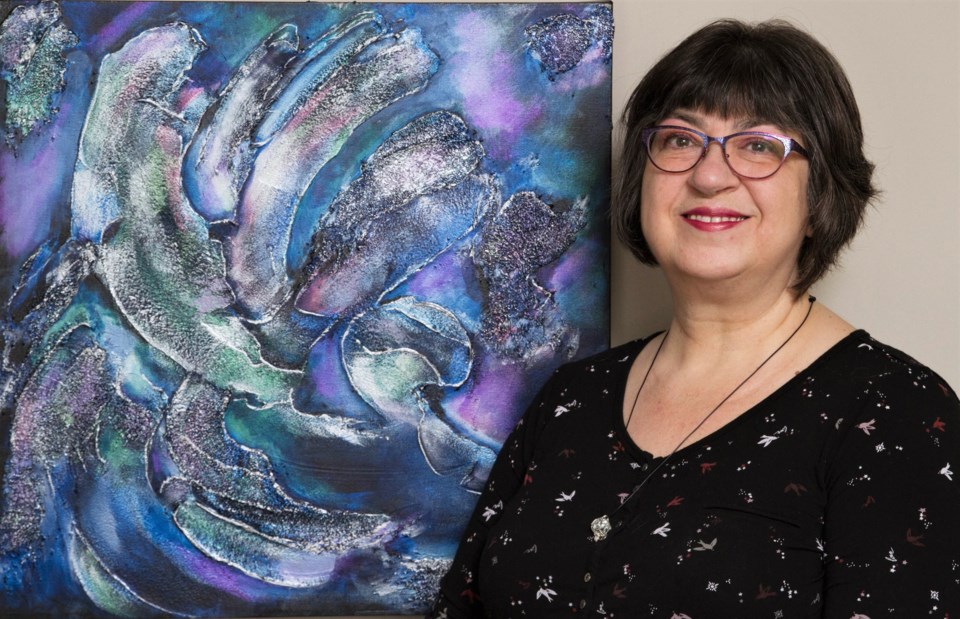 Local artist Robyn Rennie poses with Myth, a painting inspired by the show, Our Musical Universe, now open to the public in Toronto.

An acute illness in 2005 left her with a significant vision loss. Overnight, she lost the ability to work, to drive, and, most importantly to her as an artist, the ability to paint the way she used to.

She is now a visual artist with a vision impairment.

As an artist who painted highly-detailed precise pieces, this loss was devastating. Rennie had to fight against her natural impulses, and learn to paint in a whole new way. She now includes texture in abstract works and uses mediums that change in appearance depending on where it’s viewed from; it’s to show others how she now sees the world. She shares not just what she sees, but how she feels –  seeing beyond sight.

Rennie loved the night sky. When she lived in the countryside before moving to Orillia, it was a huge part of her life. On cloudless nights, she could see Orion from her window as she lay in bed – it was constant and comforting. However, she now has a centrocecal scotoma, a form of vision loss which means that while she sees stars twinkling out of the corner of her eye, when she turns to look at them, they disappear from view.

She really missed her relationship with the night sky. That is, until astrophysicist Matt Russo at the University of Toronto guided her through the universe.

Rennie’s daughter, Eryn, wanted to help her mother experience the night sky again, so she contacted the planetarium to see if they could help. They put Eryn in touch with Russo, who happened to be developing a sound-enhanced planetarium show for people with visual impairments. He invited Rennie and her family to the Dunlap Institute in Toronto last December for a preview.

Experiencing Russo’s show was a thrill for Rennie. She wasn’t expecting the musical component of the show that imparted the sensations of speed, movement and even temperature. Russo assigns musical sound to planets and stars – sounds that he believes reflect what would be there if they existed.

The show had such an impact on her that she was inspired to record her impressions of that experience in a painting titled, Myth. The concept of myths relates to the many mythical figures attributed to the constellations, she said. Mankind operates within stories to understand our world and our place in it; it makes order out of chaos, she says.

Russo was so struck by Myth that he asked permission to use it in his “Our Musical Universe” show and promotional material. Rennie says it’s a mix of science and art as partners.

Russo’s “Our Musical Universe” is now open to the public. See http://universe.utoronto.ca