Council committee green-lights minor zoning changes, an RFP process and other initiatives to pave the way for development
Aug 13, 2018 6:01 PM By: Dave Dawson 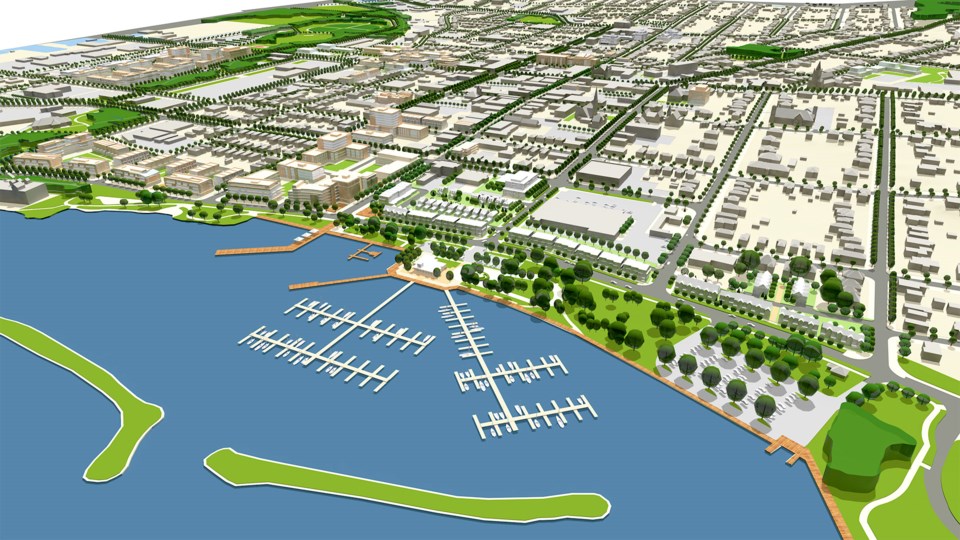 This is a rendering of what the waterfront could look like once the redevelopment is complete in what is expected to take three to five years.

Ambitious plans for Orillia’s waterfront are moving “full steam ahead” after council committee endorsed a number of measures Monday aimed at paving the way for future private development.

Decisions of council committee must be ratified at the regular meeting of council Thursday night.

City councillors heard Monday how staff have been working diligently behind the scenes to ensure the previously adopted “preferred development scenario” for the waterfront can be realized.

In general terms, that preferred scenario involves using a request for proposal (RFP) process to, ultimately, sell the lands to a private developer who can fulfill council's vision for the waterfront.

Under that vision, the 70 Front Street property (Metro Plaza) and the adjoining lands would become home to more than 100 new residential units, over 50,000 square feet of residential and/or commercial space, while “adding a new face to the city’s waterfront” entrance.

She said measures approved Monday, once ratified, would allow staff to “prepare lands for development” by, among other things, making minor zoning changes that would allow the commercial and residential development.

“This option would allow staff to move full steam ahead,” said Thompson. It would also give staff the green light to embark on an RFP process that would, they hope, lead to an anticipated sale to private developers in late 2019.

Orillia Mayor Steve Clarke lauded staff for their work and acknowledged that while it “does take some time to get this done right,” the end result will be worthwhile.

“I think we can facilitate that type of development and maybe even enhance that character,” said the mayor.

Clarke said the whole impetus behind council’s decision to purchase 70 Front Street in 2016 was to pave the way for waterfront investment.

“The original motivation for purchasing (the Metro plaza) was to move Coldwater Street down to the waterfront and open up the streetscape and … certainly to bring proper development down to this area,” he said.

The mayor said there is a gap between the city’s “beautiful waterfront park” and the downtown that “many are proud of. But that area in between, that really needs significant attention. That was the motivation for getting involved in this.”

He praised council for its “managed, systematic approach”

“I think the bottom line is it, hopefully, will make it attractive to as many qualified developers as possible” thanks to the measures the city has taken to “de-risk” the process for potential developers.

The RFP process will be carefully designed, staff noted, to ensure potential developers are on-side with the “preferred” scenario.

That’s why they sought – and received – council’s approval to spend $100,000 to hire a consultant to help craft the RFP.

In addition, Richard Bertolo said the RFP will be designed to ensure the winning bid reflects the city’s “preferred” ‘scenario.

The city’s director of business development said the rezoning prior to the process is aimed at encouraging mixed commercial and residential development. But he said “the key to effecting it will be the evaluation matrix” of the proposals. “The way we telegraph to the marketplace how RFPs will be scored” will be instrumental in selecting the right developer.

Coun. Ralph Cipolla asked if there was a way to speed up the project – particularly the opening of Coldwater Street that is about four years away.

Sugden said reconstruction of Front Street would begin in 2019 and last two years. The Centennial Drive realignment and construction would occur from 2021 to 2023; the Coldwater Street extension is part of that project.

He noted that a major sanitary sewage system “runs underneath the old railway bed and under parts of Centennial Drive and it needs to be relocated before you can begin the Centennial Drive project,” Sugden said of the long-term plans.

Coun. Ted Emond noted developers are already taking heed of the city’s ambitious plans. He noted other waterfront properties have recently been purchased by developers.

Those previously “underdeveloped” areas now have new owners who are developing their own plans.

“It’s very, very exciting,” said Emond, noting he believes this plan will be a positive legacy of council. He said “people will look back (and see) we made progress that is useful and good and creates a more viable and appropriate downtown.”

It should be noted that while various staff members provided updates at Monday’s meeting, there was a closed session meeting prior to the open session. In that closed meeting, “lease and tenant matters”, “environmental, land” issues and “timeline for confidential action items” related to the waterfront plans were discussed.

TIP OF THE WEEK: It's time for climate-friendly travel options
Sep 29, 2020 6:30 PM
Comments
We welcome your feedback and encourage you to share your thoughts. We ask that you be respectful of others and their points of view, refrain from personal attacks and stay on topic. To learn about our commenting policies and how we moderate, please read our Community Guidelines.