Piece inspired by Orillia woman and the daughter she lost to opioid overdose; 'We’re losing so many people. It’s a real community sadness’
Feb 23, 2021 7:15 PM By: Nathan Taylor 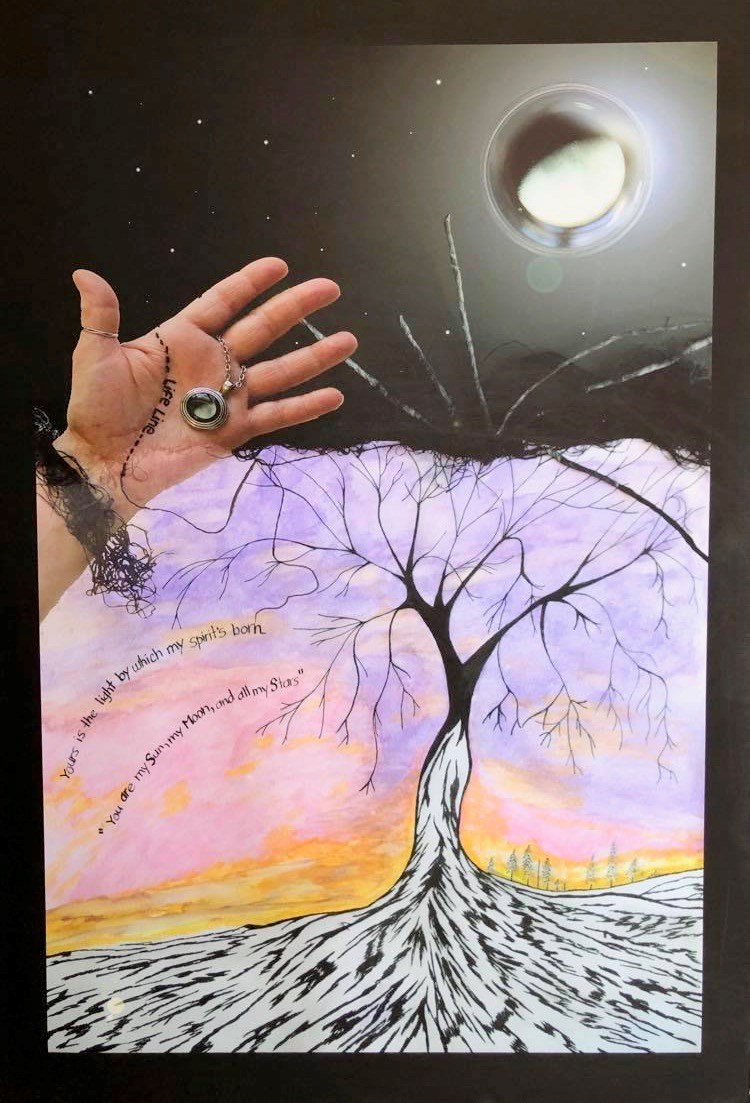 This piece of art was created by Tammy Dore and Ron Hill.Supplied image

What began as a grainy photo taken on a cellphone has evolved into a moving work of art with an important meaning.

Kathy Cole joined Tammy Dore and Ron Hill at a Hawksley Workman concert at the Sunset Barrie Drive-in in September. The moon was so striking that night, even Workman couldn’t help but mention it many times.

It was hard for Cole to ignore, too. She was wearing a locket bearing an image of the moon in its waxing gibbous phase.

That’s when Dore got creative. She used markers and watercolours to create a tree and a star-speckled sky, and imposed the image of the locket to serve as the moon.

She wrote “Life Line” on Cole’s hand — on the lifeline, fittingly — with the line extending to become a branch on the tree.

“It started as a gift for a friend, but it turned into something more,” Dore said.

She wanted to submit the piece to the Orillia Museum of Art and History’s annual International Women’s Day Art Show.

When she later found out the theme for the 2021 show was Life Lines, she “froze.”

“The hair on the back of my neck stood up,” she said of her reaction to the coincidence.

The art show was later postponed, until 2022, but Dore still wanted people to see the piece she had created, because of the story behind it.

Cole’s daughter died of an accidental opioid overdose at age 32.

Dore asked Cole to write a note that would have accompanied the piece during the art show. It reads:

A glorious lifeline connected us while she grew in my womb.

Years later, she was injured. A deadly lifeline provided escape from pain and PTSD.

It can happen to anyone.

Our community has strong roots, nurturing arms, space in our minds and hearts to have compassion for those who struggle.

Using kinder words and educating ourselves on the complex nature of substance use disorder will strengthen all.

Creating a line to erase stigma is needed.

“I was kind of depressed when (the art show) was cancelled because it really needs to be out there, especially with the opioid epidemic,” Cole said of public awareness of the crisis.

The art show would have brought a significant public audience to the issue in a unique way, and the more people learn about it, the better, she said.

“So many people have to educate themselves about how relentless this is,” she said. “It’s important because we have a real problem here. We’re losing so many people. It’s a real community sadness and we need to have empathy and understanding about why it’s going on.”

More government resources are needed, too, Cole said. When Erika got out of detox, “she was willing to go anywhere because she felt so hopeful and free,” she explained.

However, no rehab beds were available in Ontario, unless the family could pay $30,000.

Dore plans to submit the piece to next year’s International Women’s Day Art Show as a way to draw attention to the crisis and the loved ones left to grieve.

“I feel like it’s a good platform to bring awareness to the opioid crisis,” she said.