Council approves expansion of See You on the Patio to include Saturday-evening street closures; 'We have to do what we can to keep our businesses going'
Jun 15, 2021 7:00 PM By: Nathan Taylor 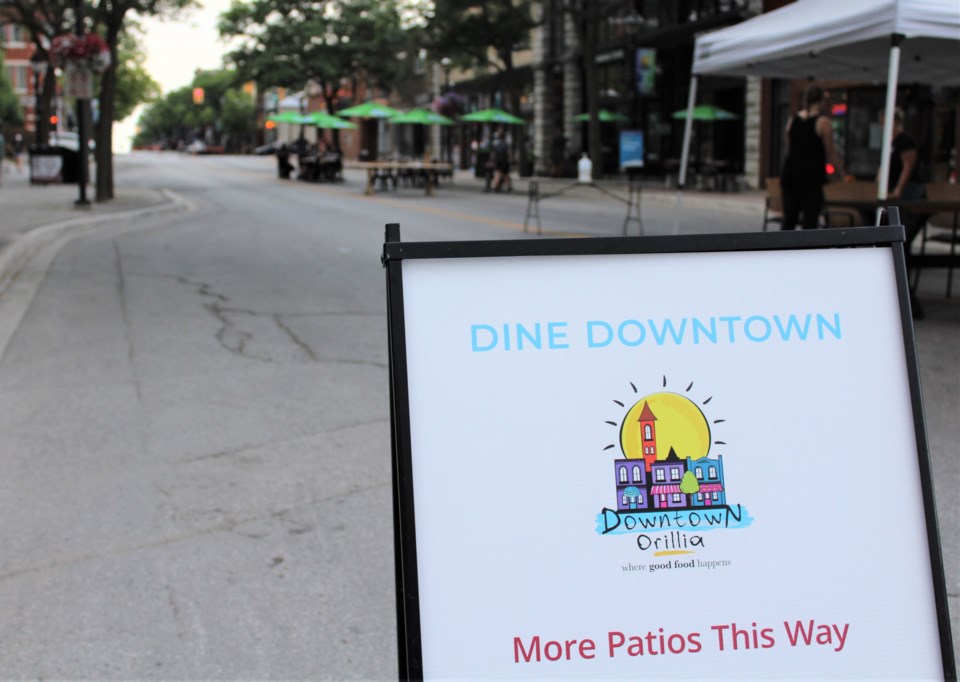 The See You on the Patio program will take place on both Friday and Saturday evenings this summer. Nathan Taylor/OrilliaMatters file photo

The city’s See You on the Patio program is being expanded to include Saturday evenings.

At a special meeting Tuesday, council supported a recommendation from the Economic Recovery Task Force (ERTF) that will see the program in place on Saturdays from 5 to 11 p.m. It will run from July 3 to Sept. 4.

In October 2020, council approved the 2021 See You on the Patio program for Friday nights only. However, when the province announced its reopening plan last month, indoor dining was still off the table until Step 3 of the plan.

That has the “potential to negatively impact businesses during what is typically their busiest season,” said Laura Thompson, the city’s senior manager of business development.

“In response to this, several restaurateurs requested the ERTF, the city and the Downtown Orillia Management Board (DOMB) to reconsider a Saturday evening downtown street closure,” Thompson wrote in a report to council.

Most downtown businesses were supportive of the program’s expansion, but Thompson noted some were concerned about the decrease in vehicular traffic and how that would affect their operations.

“The DOMB did have mixed reviews on the street closures,” she said. “There are some retailers who say that they do still rely on (vehicular traffic).”

The 2020 program was largely well received by those who responded to a survey, especially visitors. Ninety per cent “agreed that they enjoyed visiting patios in general.” A list of survey results can be found at the end of this article.

There was little discussion Tuesday about the expansion, but Coun. David Campbell expressed his support for it.

“I think it’s going to be great for the city, especially with the timeline for indoor dining with the province,” he said. “We have to do what we can to keep our businesses going.”

Council also approved pulling $15,000 from the social assistance and economic recovery COVID-19 emergency relief reserve to go toward marketing as well as staff support for the street closure.

The DOMB has agreed to provide $5,255 to cover 50 per cent of the cost of labour and security for the expansion of the See You on the Patio program.

Thompson’s report outlined the following benefits the program has for restaurants and retailers across the city:

Results from the 2020 See You on the Patio program survey: