City opts to consult with Rama on coat of arms

Feedback from First Nation could help inform changes to current coat of arms, which includes Indigenous paddler depicted in red
May 4, 2021 7:30 AM By: Nathan Taylor 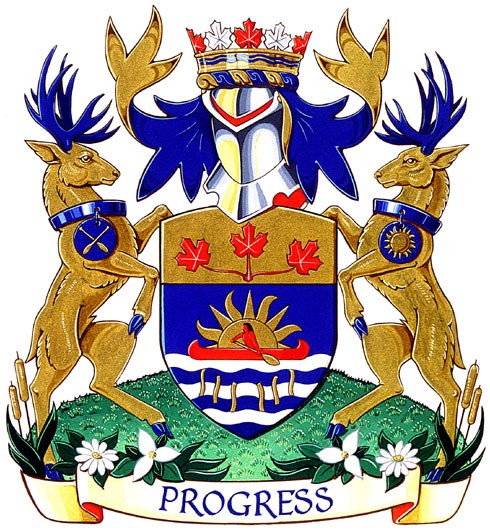 City of Orillia coat of arms

The City of Orillia will consult with Chippewas of Rama First Nation before making recommendations about updating its coat of arms.

Concerns with some of the imagery on the city’s coat of arms came up in January after Coun. Jay Fallis heard from an Indigenous person who took issue with the depiction of the Indigenous paddler, who is coloured red.

As a result, the city asked staff to look into the feasibility and cost of updating the coat of arms.

A report presented during Monday’s council committee meeting noted any changes would require a new letters patent from the Chief Heraldic Authority (CHA). The carving of the coat of arms hanging in the council chamber would have to be changed, as would city pins bearing the image.

The city would have to open a file with the CHA, which would require a non-refundable administration fee of $435.

Consultation regarding a new design would also have to take place, and then the CHA would have to find artists to complete the new design.

To update the “simplified version” of the coat of arms would cost about $3,400. The cost of updating the hand-carved version in the council chamber would depend on the changes that will be proposed.

Some councillors were split on what action to take.

Fallis wanted to go with Option 1, which directs staff to get feedback from Rama “regarding an accurate and respectful representation of the Indigenous paddler” and report back on costs as part of the 2022 budget process.

Coun. Tim Lauer suggested going with Option 2, which includes consultation with Rama but also sets aside $3,400 so the city can open a file with the CHA and update the letters patent.

Coun. Rob Kloostra wanted Option 3, which would simply receive the report as information and take no action.

“The crest certainly represents Orillia fine,” he said, adding it shouldn’t be a concern during the COVID-19 pandemic. “We can certainly revisit this at a future date.”

“It’s going to be a lot of staff time,” he said, suggesting the matter come back before council “when COVID is over.”

In supporting Option 1, Coun. Mason Ainsworth referenced a letter to the editor published in OrilliaMatters. It was written by John B. Emberson, who helped design the current coat of arms.

“I hold a deep respect and understanding of the challenges faced by our Indigenous peoples and fully understand the need to adjust elements to avoid perpetuating harmful messaging,” he wrote.

Coats of arms are “growing images” that need to be changed from time to time, Ainsworth said.

“It’s just one of those kind of housekeeping items.”

Council voted for Option 1, so staff will report back as part of the 2022 budget process after consulting with Rama.