'This is a priority issue we have to take seriously,' says councillor, noting 'we really need' affordable housing; Council shelves debate until budget time
Nov 1, 2019 1:30 PM By: Dave Dawson 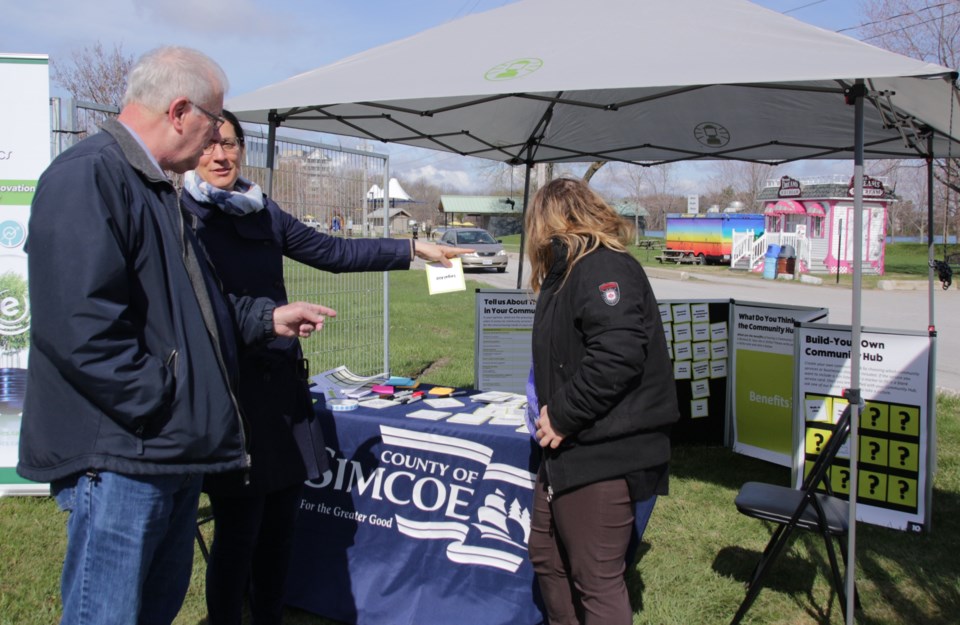 Cam Davidson talks to staff from Eco-Ethnomics, a consulting firm hired by Simcoe County, to conduct the sessions gathering information on what Orillia and area residents want to see in the hub planned for the ODCVI property. Mehreen Shahid/OrilliaMatters File Photo

Cam Davidson, who heads up the recently-formed affordable housing committee, made the pitch to city councillors his week.

“The committee has developed eligibility criteria for a suite of incentives for council to consider,” said Davidson. “However, paramount to this policy framework is the establishment of funding in the form of an affordable housing reserve.”

While most councillors seemed in favour of the concept, they decided to delay making a decision, opting to send the issue to the 2020 budget deliberations, slated for later this year.

“I’m certainly in support, in principle, of what the committee has come up with, I am,” said Coun. Ted Emond.

However, he said in light of the municipality’s recent strategic planning exercise, other capital demands and downloading pressure from the province, affordable housing concerns require context.

“I would like us to make this decision about funding and the amount of funding in context of all of the priorities, all the other things we have before us and, at that time, because of the principle behind this and the fact there is a need in our community for more housing, we can put the appropriate priority on affordable housing and allow the budget process to allocate the funds going forward,” said Emond.

“I do believe funding will be forthcoming,” said the second-term Ward 1 councillor. “My sense is a delay of six to eight weeks until budget committee has an opportunity to report would be useful.”

The majority of his colleagues agreed.

Coun. Jay Fallis said he thinks the city, ultimately, should support a 10-year tax holiday for affordable housing projects as one of its incentives.

He noted that a similar initiative from 2003-2013, which provided a tax holiday up to a maximum of $20,000 per unit, allowed five projects to break ground. Those five projects were:

The tax holiday “did allow these projects to have financial viability and guaranteed that affordable housing could be provided to a lot of Orillians,” said Fallis. “There is real world success stories we can draw from our own community that shows this particular method works.”

Mayor Steve Clarke said while “outside-the-box” thinking is required - he commended the committee for its innovative ideas - council must be careful with tax holiday programs.

“Some of the projects we’ve supported … not too far from City Hall, I would not support again,” said the mayor, alluding to the Barrie Road projects, which have been plagued with complaints from those who live there about management issues.

Additionally, the units in those buildings on Barrie Road will soon not be required to be ‘affordable’ thanks to the conditions of that tax holiday program.

“There are many, many situations where affordable housing inventory is not keeping up with demand and creating hardships,” said Clarke, who noted “systematic change” is required and that could be achieved via incentives.

“We need to involve the private development community to help municipalities and other levels of government to meet the need,” said Clarke, who said options such as rent-geared-to-income and rent-below-market-rates are other options to consider.

“I truly believe if we’re going to increase inventory and decrease the number of people who cannot find affordable housing, we need new strategies,” said Clarke.

The mayor agreed with Coun. Emond that budget deliberations are the best venue to consider options and noted the city already is committed to about $1.8 million in annual contributions to the County of Simcoe, which administers multiple affordable housing programs.

Fallis said he is looking forward to delving into the issue at budget time and says the city needs to make the issue a priority.

“Both as a councillor and as an individual living in Orillia, this is a priority issue we have to take seriously,” said Fallis, who added he is “encouraged” by the committee’s ideas.

“I hope it does create affordable housing options we really need in this community.”

The committee recommended the following municipal incentives to create more affordable housing in partnership with the federal government, the provincial government, and the County of Simcoe.

According to research compiled by the Orillia Affordable Housing Committe, in 2019, an affordable housing price in Orillia is $211,000 and in 2018 the median household income was $57,292.

In 2018, the CMHC average market rents in Orillia were: