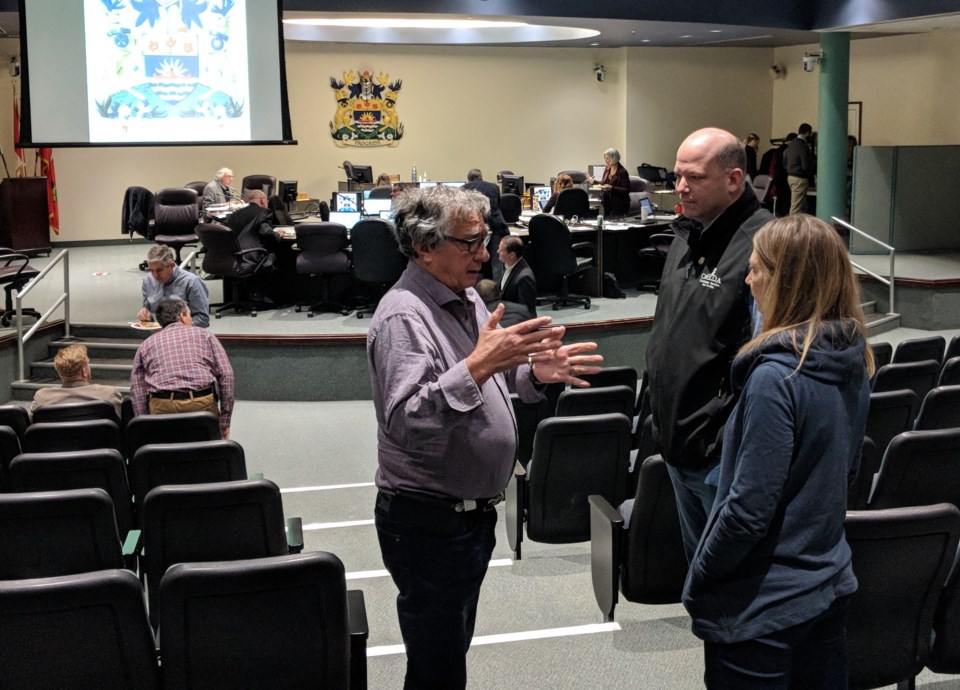 The city opened up its wallet Monday - to the tune of almost $800,000 - to help a trio of local organizations.

While there are some conditions and caveats attached to the funding, city councillors pledged:

City councillors made the decisions Monday during a 10-hour marathon meeting at city hall as it wrapped up deliberations on its $56-million operating budget.

The decisions have to be ratified at a special Feb. 4 meeting of council.

The third-party funding requests generated a lot of debate.

Coun. Ted Emond, who said he believes in the importance of Mariposa House Hospice, said he could not support their request because the plea sought money for operating costs.

“I’m opposing this item on principle,” Emond said of the hospice funding. “In Canada, the federal government and, in particular, the provincial government are responsible for health care.”

Emond noted that Mariposa House Hospice officials told council during its presentation earlier this month that it had successfully reached its $3.5-million capital campaign goal.

That, Emond noted, means city cash would be used for operating funds.

“I’m not, in principle, in support of the city becoming a funder of health care,” said the second-term Ward 1 councillor.

However, support for the hospice, in general, was evident around the table. The question became where does the money come from?

City CAO Gayle Jackson reminded councillors that there is only so much capital money available - a sentiment echoed by Treasurer Jim Lang. He noted there is more than $30 million worth of projects in the 10-year capital plan in the “insufficient funding” category.

Providing money to the new hospice via capital funds would mean another capital project would likely be scrapped.

Lang said the funding could come from the city’s tax stabilization fund, which has a balance of about $3 million.

In the end, councillors voted to provide the $150,000, from the tax stabilization fund, on the condition it be used exclusively for capital costs.

Council agreed to provide $50,000 in 2019 and up to $50,000 in 2020 in the form of matching funds donated by the surrounding townships. The idea is to put pressure on Oro-Medonte, Severn and Ramara to help fund the agency.

The conditions did not sit well with two councillors.

“I would remind councillors … we voted on Thursday to give $50,000 a year to the Mariposa Folk Festival, which is a music festival,” said Coun. David Campbell. “What we’re talking about today feeds people. Putting conditions on this and conditions that could potentially ... reduce the amount we’re giving them I don’t think is right, myself.”

Ultimately, a majority of council agreed to provide the funding with the conditions.

Council also agreed to the hospital foundation’s half-million-dollar pitch. This, too, had some key provisos attached.

The funding is subject to the “timing of cash flow tailored to ... the availability of capital funds” while the final instalment is to be given only when the other $1.7 million has been secured by the Foundation.

The final condition calls on the hospital to be "in greater alignment with the city in two areas: economic development and sustainability, community health and well being."

The first condition is meant to allow the city to use its future dividend from the Orillia Power Corporation (OPC) to, in part, fund the OSMH Foundation’s request. Orillia Power has already committed its 2019 profits to Lakehead University.

Coun. Tim Lauer did not support the funding.

“This is a significant, huge ask,” said Lauer, who noted that whether the money comes from the capital tax levy or OPC, “it comes out of the taxpayers’ pocket. I can’t support that at this time.”

Mayor Steve Clarke, who sits on the hospital board, said such funding requests are “challenging” for municipalities.

However, he said in light of the city’s estimated $2-million surplus in 2018, coupled with the option of using OPC profits, it’s a “different conversation. Because of that … I will support it.”

In the end, councillors agreed.

That news was welcomed by OSMH CEO Carmine Stumpo.

“For us, the important thing is to secure the commitment and we can work through the details,” he said. “I’m pleased to hear the commitment is there from the city to work together and that’s a positive step forward.”

He also stressed the hospital should be working “in the interests of the community, so I don’t see that as contrarian. I think that’s actually logical. Those conditions are reasonable and fair.”

It took councillors almost a day longer than expected to wade through its operating budget. After almost three days of deliberations, the projected tax hike is at 3.25 percent.

Heading into the process, the tax hike was slated to be 2.95 percent.

On Tuesday, councillors will continue to work their way through the capital budget, which they began to ponder Monday evening.

It’s expected the capital budget will be completed Tuesday.

City councillors could then choose to use more of its tax stabilization fund to lower the tax rate and, potentially, reimburse the fund with money from the 2018 surplus.

Whatever happens, nothing discussed during the several days of budget committee meetings to date is official until it is ratified at a special meeting for that purpose on Monday night.