'We probably should have considered a higher contingency' at the outset, says city staffer
Jan 15, 2019 10:30 AM By: Dave Dawson 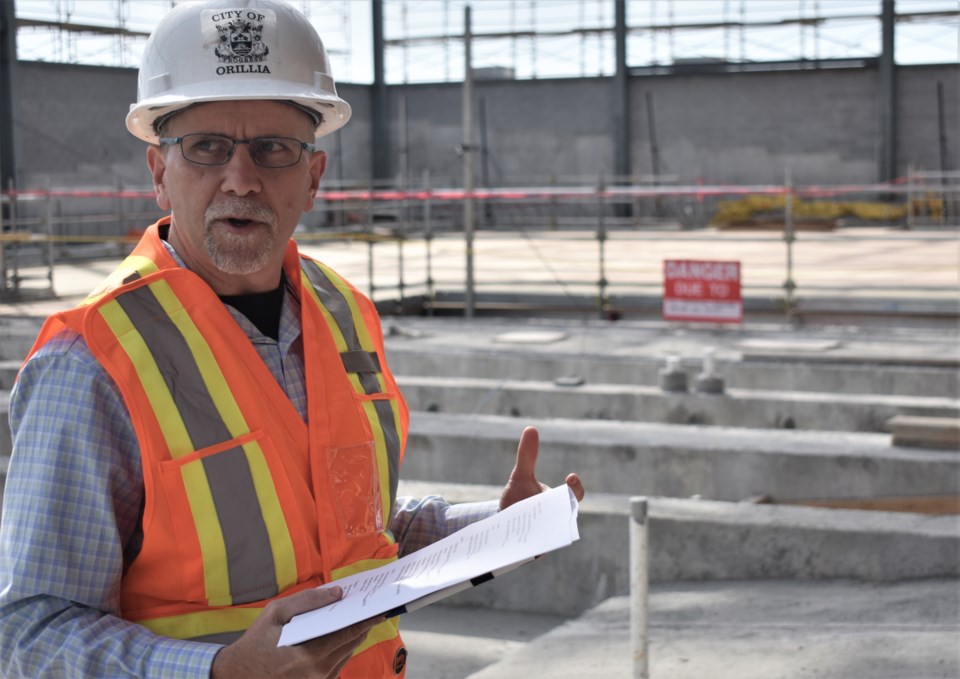 Ray Merkley, the city’s director of parks, recreation and culture, is shown during a summer tour of the recreation facility under construction on West Street. The city was asked to provide an additional $975,000 to the project's contingency fund at a pre-budget meeting this week. Dave Dawson/OrilliaMatters

The city's budget committee, comprised of the mayor and city councillors, learned Monday that parks, recreation and culture staff want to add $975,000 to the contingency fund for the $54-million recreation centre under construction on West Street. (The decision will be discussed further during upcoming budget deliberations and must be ratified at the Feb. 4 special meeting of council.)

City officials claim the additional funds will not come out of taxpayers' pockets.

Typically, contingencies are used to address issues that arise once construction activities begin, that were unknown and/or outside the scope of the original construction tender documentation, noted a report to budget committee.

Originally, officials set the contingency fund for the massive project at $2 million, which represented about 4 per cent of the project's budget.

Last summer, council approved an additional $850,000 to the contingency "to account for extra costs associated with site conditions." That brought the total contingency to 5.6 per cent.

This week's extra $975,000 brings the contingency fund to about 7 per cent of the project's overall budget.

Ray Merkley, the city's director of parks, recreation and culture, says, in hindsight, the original contingency fund was too low.

"We probably should have considered a higher contingency," Merkley told city councillors at a pre-budget meeting this week.

He said staff chose to use "an incremental approach" to the budget contingency.

"We don’t want to appear that we have unlimited funds or that we have too large a contingency at any one time," said Merkley, who notes the city policy recommends a 5 percent contingency fee for such projects. However, he noted that policy also suggests a higher fee if there are risk factors.

Merkley said building on a brownfield such as the site on West Street is a risk factor.

Merkley told councillors that approximately $2.3 million of the contingency fund has been spent to date. However, projected change orders, additional environmental and construction testing, disputed change orders and legal fees loom on the horizon.

Coun. Jay Fallis asked, politely, if this might be the last time staff come to council looking for more funds.

Merkley conceded that "there are no guarantees, it’s a large project ... (with a) lot of complicating factors." However, he said he believes this latest top-up should be the last one.

Orillia Mayor Steve Clarke also acknowledged the initial contingency fee was too low and took pains to explain why more money would not be needed from taxpayers.

'There is no additional tax impact when you look at mitigating factors," Merkley agreed.

The city had budged almost $500,000 in operating costs for the new recreation facility in 2018. That money was not spent since the facility did not open.

In addition, the city "saved" about $260,000 because the annual environmental site testing program was not required in 2018 since the facility was under construction.

FInally, the city's recreation centre fundraising team has raised about $350,000 for the project.

Merkley and Kent Guptil, the city's director of facilities and special projects, also provided council a brief update on the project.

"While delayed due to weather and material supply issues, there are over 60 tradespeople on site daily," said Merkley of the ongoing construction.

He said staff and city consultants are "quite satisfied" with the work completed. He said the project is 70 per cent complete; a June opening is anticipated.