Jay Fallis drafting report to council after multiple complaints in west Orillia; 'There’s an opportunity to improve the design of (Emperor Drive),' he says
Sep 26, 2019 7:45 AM By: Nathan Taylor 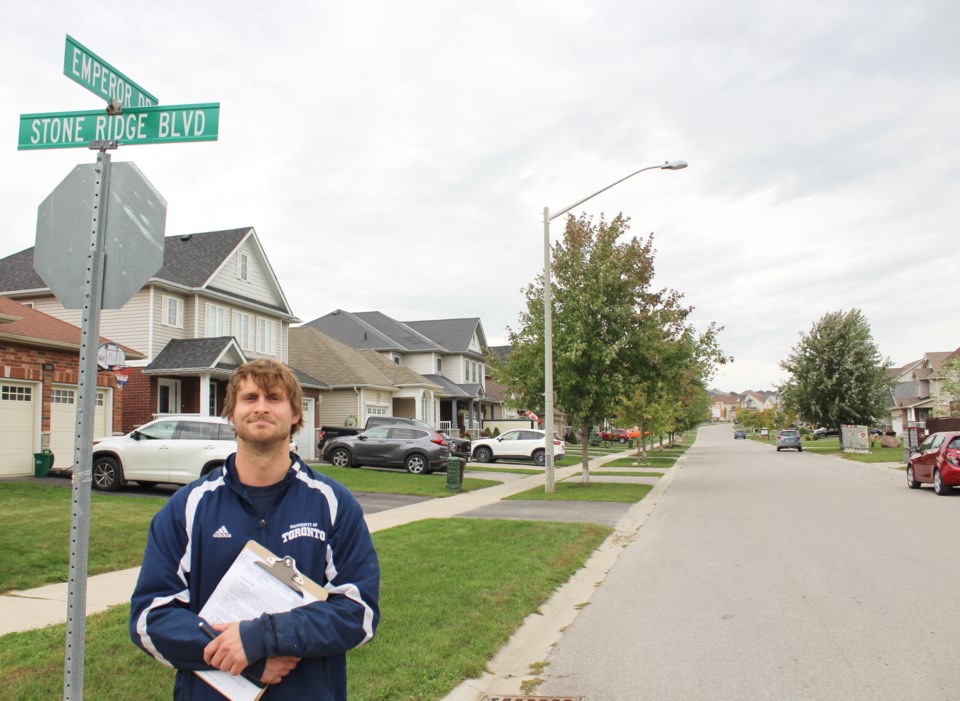 Coun. Jay Fallis is shown at the intersection of Stone Ridge Boulevard and Emperor Drive. He has received numerous complaints regarding dangerous driving on Emperor Drive. Nathan Taylor/OrilliaMatters

Two councillors are looking to curb speeding and racing in various parts of the city.

At a meeting this week, the Orillia Police Services Board discussed concerns brought forward by Ward 3 Coun. Jay Fallis, who has received multiple complaints about dangerous driving in the areas of Stone Ridge Boulevard, Isabella Drive and Emperor Drive.

He said residents have reported multiple instances of street racing on that road at night. Emperor Drive is almost a kilometre long and there are no stop lights or stop signs for people driving on that road.

“There are about 120 homes on Emperor and a lot of them are young families. Cars are going through without something to slow them down,” he said.

During the police services board meeting, Orillia OPP Insp. Veronica Eaton was asked about the possibility of increasing patrols in the area. She said police establish new “focus patrols” each month, zeroing in on “one or two hot locations” in the city.

Calls for service and collision data are used to determine where police will patrol, so there’s no guarantee Emperor Drive will be on their radar.

“That neighbourhood could benefit from more frequent enforcement and checks by police,” Fallis said, but added, “It’s up to them to determine areas that need it the most.”

In the meantime, the councillor is looking at other ways to address the problem. He is drafting a report that he hopes to bring before council in the next month or two.

The point is to look at traffic-calming measures in other trouble areas, including Skyline Drive and Collegiate Drive. Traffic-calming options are few when it comes to Emperor Drive, so Fallis is looking at other measures.

“There’s an opportunity to improve the design of (Emperor Drive) and I think that’s where the city can come into play,” he said.

Meanwhile, Ward 2 Coun. Rob Kloostra is looking for more police presence in the Twin Lakes Secondary School parking lot, where “there seem to be quite a bit of vehicles racing” at night. He lives nearby and can hear the cars in the lot.

“There should be some concentration there when school starts in September,” he said. “The school has an officer there quite a bit during the day, talking to the kids, but I’m not sure they’re hammering away at that message a lot.”

Residents who want to contact police about these types of complaints can do so by calling the non-emergency line at 1-888-310-1122 or by using the self-reporting tool online.

The city’s policy on traffic calming can be found here. It includes an example of a neighbourhood petition on Page 34.