Less than $1M needs to be raised thanks to two recent contributions; 'We hope the community rallies to help us close that gap,' official says
Nov 22, 2020 12:30 PM By: Nathan Taylor 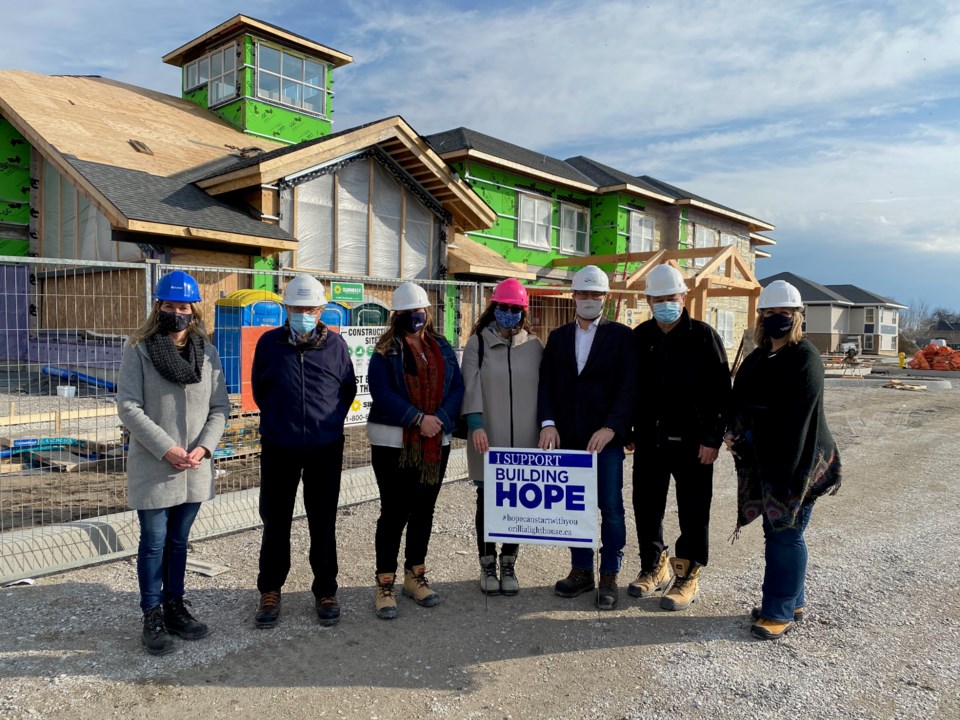 A few days ago, there was still $1 million that needed to be raised for the new Lighthouse shelter and community services hub on Queen Street. That figure is now down to six digits.

On Thursday, Tom Gibbs, business representative with District Council 46 of the International Union of Painters and Allied Trades, presented a cheque for $10,000 to Building Hope officials on behalf of the union. That brings the union’s total giving to the campaign to more than $30,000.

“This project is very close to its goal, so we thought it was a good one to support,” said Jim Mirkopoulos.

His family runs its core business, Cinespace Film Studios, in Toronto, but also has ties to Orillia, having renovated the Tudhope building downtown. The family also operates Horizon General Contractors, which has purchased the Orillia Central School property on Coldwater Street.

When Mirkopoulos was speaking with Simcoe North MPP Jill Dunlop, he asked about causes in town that could use some support. When Dunlop told him about the Building Hope project, he “became enamoured with it,” he said.

“It’s a part of our family philanthropy that’s important to us,” he said, noting they have also supported a shelter and a mission in downtown Toronto. “It’s to help fill the gaps.”

He joined his family members, including Steve, Larry and Chrisoula, for a tour of the Building Hope project Friday.

“It’s amazing,” said Mirkopoulos, who was impressed with the natural lighting, open spaces and family area. “There will be a lot of families reeling from a financial perspective (as a result of the COVID-19 pandemic). This will be needed.”

“Any donation is fantastic, but when we see several zeros on the end of it, it helps close that gap, and that’s our big goal right now,” she said. “Those kinds of donations also help to generate excitement in the community.”

She hopes to have most of the donations in by spring, when the new facilities are set to open. Building Hope does have a loan from the County of Simcoe — interest-free for three years — that will allow it to open without needing a mortgage. However, the more money raised in the meantime, the better.

“We hope the community rallies to help us close that gap,” Thomas said.

More information about Building Hope and ways to support it can be found here.

Mayor 'surprised' by low downtown foot patrol numbers
Nov 27, 2020 12:30 PM
Comments
We welcome your feedback and encourage you to share your thoughts. We ask that you be respectful of others and their points of view, refrain from personal attacks and stay on topic. To learn about our commenting policies and how we moderate, please read our Community Guidelines.