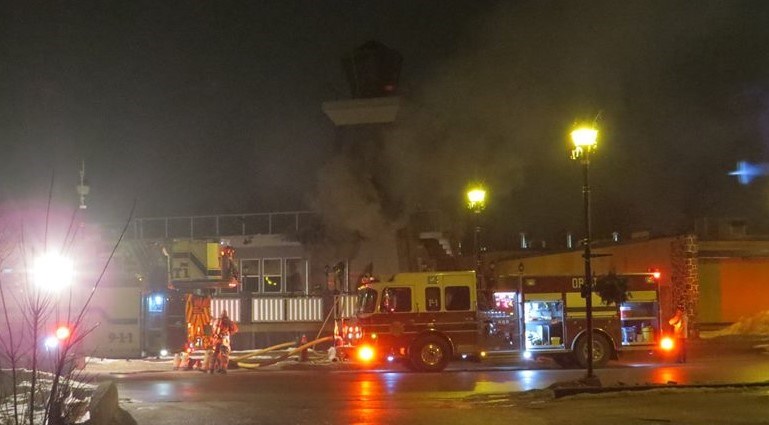 An “electrical deficiency” caused an early-morning fire that destroyed the inside of Studabakers Beachside Bar and Grill on Monday.

“The cause was an electrical deficiency and we know it happened in the ceiling area outside of the kitchen,” Orillia Fire Chief Ralph Dominelli told OrilliaMatters Tuesday. “Further analysis is required to determine exactly what source ignited.”

An investigator from the Ontario Fire Marshal’s (OFM) office arrived on scene Monday afternoon. Working with the Orillia Fire Department, the OFM probe was able to pinpoint the cause of the blaze which did about $750,000 worth of damage to the popular Mississaga Street East eatery.

Dominelli said the fire marshal brought in an electrical engineer to assist the investigation. “All other causes were eliminated,” said the fire chief, who noted they also viewed footage from video cameras positioned inside the bar as part of their probe. “Any time there are cameras around the facility or in the facility, it does help determine the cause,” he said. “Sometimes it just helps us understand how it happened or how the fire travelled. In this case, the video just confirmed the evidence.”

The OFM turned the building back over to owner Joe Winacott and the insurance company. “It will be up to them how they will move forward,” said Dominelli.

Just hours after the fire, that puts about 40 people out of work, Winacott vowed to rebuild. “Our goal is to get open as fast as we can. It sounds like this could take a while. I don’t really know how the process works but we want to let our employees know that, hopefully, we will be back," he said.

The OFM was called due to provincial protocols. If damage from a fire exceeds $500,000 the fire marshal must be notified and, after speaking with local fire officials, determines if an investigator is dispatched to the scene.

Dominelli said the investigation is not technically closed until a final report is received from the OFM. He said that can take four to eight weeks.

No one was injured in the blaze that started at about 3 a.m. Monday morning.