‘Even the devil has a backbone’; chilling messages shown to jury 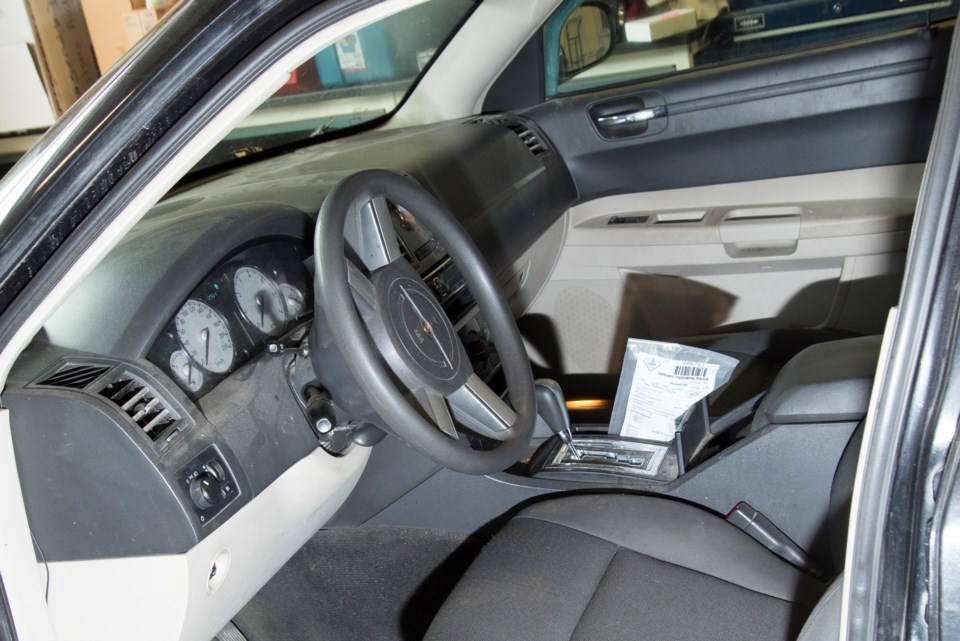 A police evidence photo of the interior of the black Chrysler 300 seized from Natalie Forget, showing the police evidence bag containing the Motorola XT in the centre console.

Online messages sent between the co-accused and the victim prior to an Orillia homicide show a slow escalation of tension leading up to June 4, 2017.

Evidence of online correspondence between Sonny Brokenshire, Martin Forget, Brian Quesnel and Joseph Simonds was presented to the jury on Thursday in the first-degree murder trials of Quesnel and Forget.

The two are charged in the death of Simonds. Although initially charged with first-degree murder as well in relation to the crime, Brokenshire took a plea deal in January to the lesser crime of conspiracy to commit murder in exchange for testifying.

The jury heard evidence on Thursday from OPP digital forensic analyst/investigator Jeremy Dupuis, who was tasked with analyzing data recovered from five devices seized as part of the homicide investigation.

The jury heard that on May 13, 2017, Forget sent a series of Facebook messages to Joseph Simonds.

“Since clearly you’re in no rush to come down here, how about I head up there. Message you from whichever spot you can see me coming. Step out of whichever protection house you need. MAN UP. COME OUT AND PLAY on your TERMS... coming to you,” wrote Forget.

“Even the devil has a backbone,” wrote Forget to Simonds.

The messages were uncovered from a Motorola XT phone which was found in the centre console of the black Chrysler 300 seized by police from Natalie Forget in Alexandria, Ont.

The web search history on the phone also showed searches on June 4 and 5, 2017 for news articles surrounding the death of Joseph Simonds, as well as buy-and-sell searches for vehicles.

A Samsung Galaxy Note 2 was surrendered to police by Nicole Pinto, girlfriend of Sonny Brokenshire, and was associated with her and Brokenshire although the SIM card had been removed.

Facebook Messenger conversations between Sonny Brokenshire and Martin Forget were recovered from the Samsung phone by Dupuis.

“Not a word... how to I track him without raising suspicious activity,” wrote Forget to Brokenshire on May 12, 2017. “Dead serious.”

Brokenshire replied that his girlfriend, Nicole Pinto, had been tracking Simonds through Facebook.

A deleted message from June 4, 2017 at 1:27 a.m. to Brokenshire from friend Erik Wiggins alerts Brokenshire to Simonds’ home on Franklin Street.

“Joe’s there I think pretty sure still,” wrote Wiggins.

During Brokenshire’s testimony earlier this week, he admitted he had deleted messages from his Facebook.

“I got rid of a lot of messages between Joe, others and myself. I just wanted to put it all behind me,” said Brokenshire during his testimony.

An RCA tablet was recovered from 282 Franklin St., however Dupuis was not able to extract data from the device. Two iPhone SEs were also recovered, however there was no data of significance recovered from those devices either.

During cross-examination, Forget’s defence attorney, Alan Brass, asked Dupuis if he knew how the phones were handled prior to his involvement.

“No,” said Dupuis. “I have no indication of how they were seized.”

“So anybody could be using any phone, correct?” asked Brass.

Brass asked if any of the phones were password protected or analyzed for fingerprints.

Also on Thursday, the jury heard testimony from Sean Goodmurphy, who testified that after finishing work on June 4, 2017 at 3 a.m. at Casino Rama, he returned home to Orillia and arrived at his residence at about 3:40 a.m.

While walking to a nearby Mac’s Convenience Store on James Street East, Goodmurphy testified he heard a loud bang like a gunshot or a car hitting a post while travelling to the store, and then saw a dark-coloured Chrysler 300 travelling south on Forest Avenue.

Harbic asked Goodmurphy why he wasn’t alarmed by the sound he heard.

To read about Day 3 and Day 4, which saw Sonny Brokenshire testify, click the links.

To read about Day 5, outlining links between the Chrysler 300 and the crime, click here.