Two identification constables with the OPP took the stand on Friday to give their evidence in the death of Joseph Simonds
Feb 8, 2020 8:00 AM By: Jessica Owen 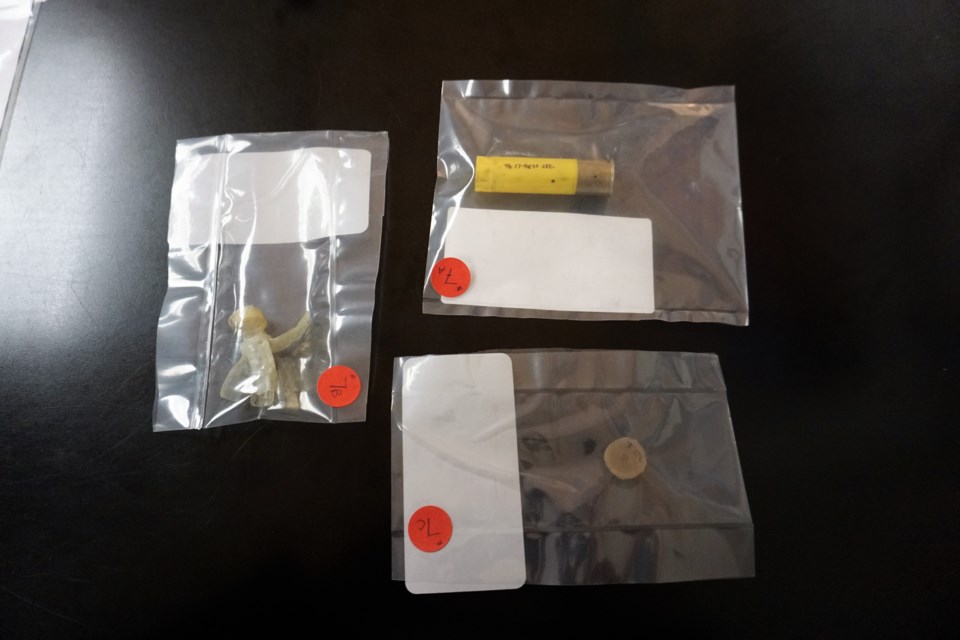 While there was forensic evidence collected at the apartment of Joseph Simonds after his death in 2017, none of it conclusively links Brian Quesnel or Martin Forget to his death, a jury heard on Friday.

Day 2 of the first-degree murder trials of Forget and Quesnel took place yesterday, with the jury hearing testimony from the two forensic identification officers with the OPP who were tasked with collecting evidence.

Forget and Quesnel are charged in the death of Joseph Simonds on June 4, 2017.

Const. Patricia Marcellus and Const. Steven Barnstable photographed the scene of the crime at 282 Franklin St. on June 4 and collected evidence over the following week.

Marcellus testified in court on Friday that there were four pieces of evidence tagged at the scene that were seized by police: footage from a camera from an adjacent property that was pointed at the driveway of 282 Franklin St., an empty shotgun shell found on the stairs leading to the entrance of the basement apartment, plastic wadding that held shotgun pellets that was found in the hallway between the kitchen and the living room and a piece of plastic found on the floor of the kitchen.

According to Marcellus, the shotgun shell was never tested for fingerprints but was tested for DNA and came back negative.

Marcellus testified there were passive blood droplets leading from the kitchen down the hallway, ending with a pool of blood where Simonds was found in the living room. She also testified there was no blood found elsewhere, such as on walls or the apartment door.

Quesnel’s defence attorney, James Harbic, asked if Marcellus was aware of how Simonds ended up in the living room when he was shot in the doorway near the kitchen.

“It was my impression he stumbled from the kitchen,” said Marcellus.

Marcellus also testified that a Chrysler 300 was seized by police as part of the investigation.

In the vehicle she found a variety of items including a screwdriver, hammer, orange gloves, a piece of paper with a phone number on it, an empty Monster energy drink can and, in the centre console, a black Motorola cell phone with a cracked screen.

In the glove box, Marcellus said she found a parking pass for an address in Orillia.

The vehicle was also checked for fingerprints and gun shot residue. All evidence collected was sent to the Centre for Forensic Sciences in Toronto.

Alan Brass, defence attorney for Forget, asked Marcellus about the evidence she collected.

“There was absolutely no forensic linkage to Martin Forget, is that correct?” asked Brass.

Marcellus also testified there was no gunshot residue found in the vehicle.

During cross examination, assistant Crown attorney Michael Flosman asked Marcellus about the reliability of gun-shot residue evidence. He also asked her about entering the crime scene after being told a shooting had taken place.

“Did you see anything that led you to believe what you had been told wasn’t what happened?” asked Flosman.

“No,” said Marcellus. “(Gun-shot residue) is a very fluid particle. If it’s windy out, it can be blown away. Every contact would reduce what would be there.”

Barnstable, who testified primarily as an expert in tire markings, testified that the tire markings on the driveway of the Franklin Street residence had no unique characteristics, and could not definitively be linked to a particular vehicle through forensics.

The jury also heard testimony on Friday from County of Simcoe paramedic Leslie Stock who, along with two others, were the first paramedics at the scene.

Stock testified that when she arrived, Orillia firefighters had started CPR on Simonds in the living room of the basement apartment; he had obvious trauma to his chest and abdomen, and that upon checking Simonds, she discovered he had no pulse and was not breathing.

She testified she was told by an OPP officer already at the scene that the injury was due to a gunshot.

The trial resumes Monday, with Sonny Brokenshire slated to take the stand. Brokenshire, who was also initially charged with first-degree murder in the death of Simonds, pled guilty to conspiracy to commit murder on Jan. 10 in Newmarket court.