Put the Kettle on Honey I'm Coming Home was a labour of love meant for his grandkids; Interest from public has spawned third printing of book
Sep 27, 2020 1:30 PM By: Dave Dawson 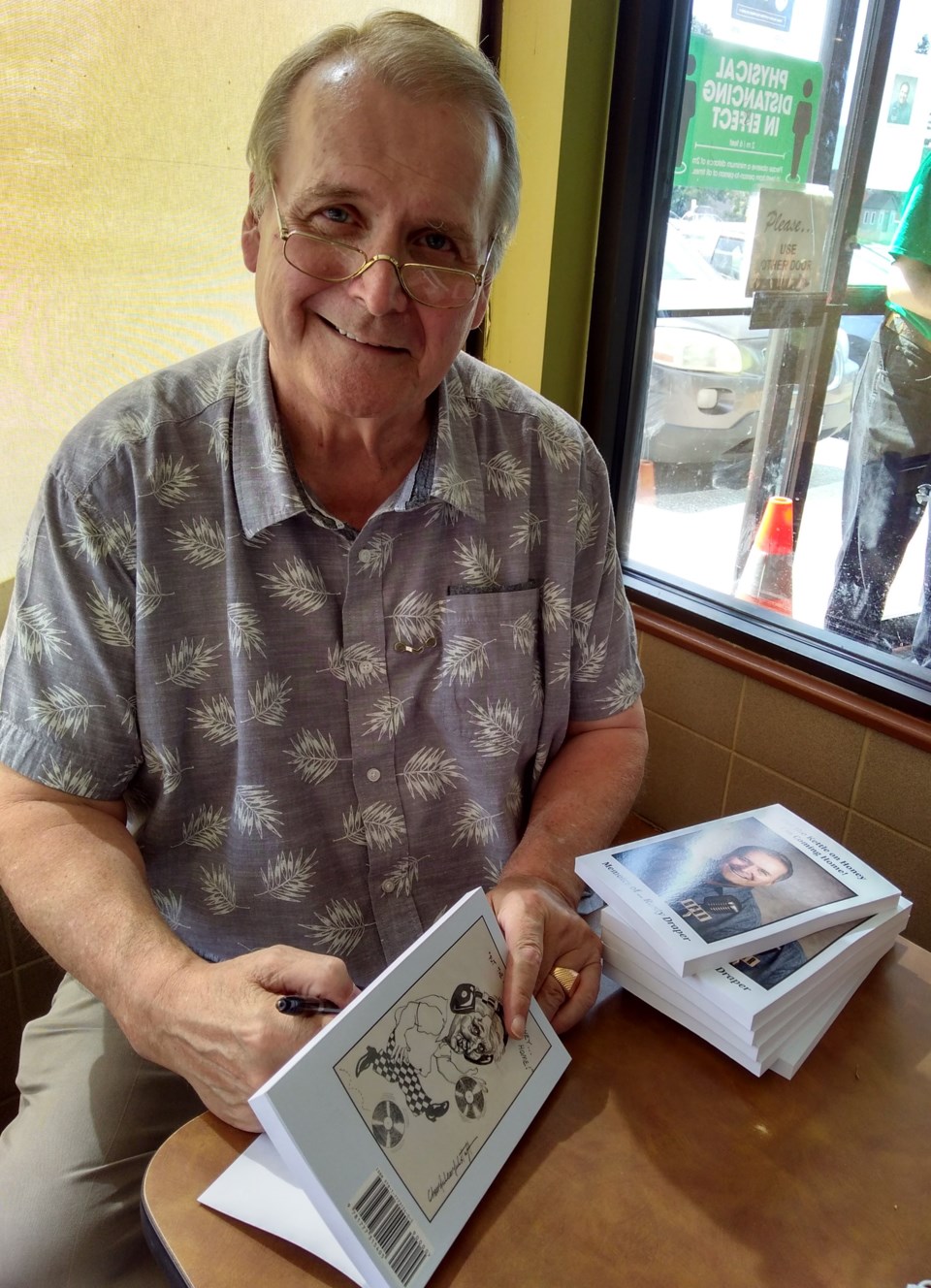 Rusty Draper signs a copy of his book, Put the Kettle on Honey I'm Coming Home when he met with people who wanted to purchase the memoir at Country Style Donuts. Contributed photo

If you are of a certain vintage and grew up in Orillia, Rusty Draper’s voice is likely as familiar and welcoming as a hot cup of tea on a cold winter’s night.

Draper was the “morning man” on the city’s local radio station, CFOR, for many years; his voice and on-air personality helped define life in the Sunshine City for many.

Because he provided the soundtrack for mornings in Orillia, decades later many still parrot back to him his trademark daily signoff: “Put the kettle on honey. I’m coming home.”

That’s also the apt title of his new memoir - a 218-page book of homespun stories that mixes equal parts history, humility and humour to provide insight into not only one of Orillia’s most popular personalities but the broadcast industry, the region and its characters.

In the book’s “forward,” Jack Latimer, another local broadcasting legend, thanked Draper for giving him a start in radio and pointed out the book was originally intended solely for family and friends.

But when word about the book got out, many people expressed interest in it.

“The truth is, thousands of people feel Rusty is their friend and many have never met him,” said Latimer.

And that’s because Draper “poured his heart into every morning radio show he did and became like a family member to total strangers.”

Draper admits to being “absolutely amazed” at the response to his “little book intended for my grandkids.”

He has had to go back to the printer three times already to order more copies of his popular self-published tale.

The project grew out of Draper’s frustration over how little he knew about his own forefathers. So, he decided he would do what he does best as a self-described raconteur - provide “the next generation” of the family with the stories that helped shape him and his life.

And what a life.

“I’ve lived a very interesting life,” understated Draper, with a smile that is quick and sincere and speaks to the way he approaches life.

In his book, he uses his trademark self-deprecating humour to regale readers about his memorable meeting with boxing phenom Archie Moore, about hitchhiking out west, about travelling to Nashville on a whim and brazenly interviewing Johnny Cash, about an ill-conceived parachute stunt and many other stories from a colourful past.

It’s a journey that would be almost impossible today. He recalls failing several grades before turning his back on formal education in Grade 10.

While he quit school, he didn’t leave; he became a janitor at the same school, instead. As he swept the halls, he dreamed of being on the radio, so he took a correspondence course in radio and TV.

Screwing up his courage, in 1966, he went to an interview for a job at CKAR Radio in Huntsville.

He didn’t realize it at that time, but the station was looking for a “newsman” to deliver the newscasts.

The problem was Rusty was dyslexic, although his difficulty reading and writing had no such label in the 1960s.

He memorized every word of every story of the newscast until he could get it right. “The guy who couldn’t read” won the job, he jokes years later.

But he was not good at it. Three weeks later, he was fired. But his boss, George Young, said he liked Draper’s “ad-libbing” and offered him his own show.

He never looked back, finding a niche that would take him from Huntsville to Niagara Falls and Orillia before returning to Muskoka, where he finished his career.

Along the way, he and his wife, Pat, had two kids, later grandchildren, and always found joy “in the simple things.”

The book is full of tales about hijinks at CFOR that included live on-location broadcasts that didn't always go as planned, on-air weddings and stunts that many people will likely remember.

But it’s not all fun and games. At times, he admits in the book, he struggled with alcoholism as his grandfather had before him.

After that, the two began to live out their Christian testimony. Rusty never drank again.

Eventually, Draper decided to leave radio and devote his time to evangelism - a career change that took he and his wife to Russia, Vietnam, India, Ethiopia and many other places.

Along the way, he had the good fortune of meeting Mother Teresa - just two months before her death.

But he always found his way back to this area and to Orillia, where he still lives. These days, he’s attempting to master Zoom and stay connected with the friends he’s made around the globe.

“I have been lucky to have a most interesting life with a lot of amazing experiences,” says Draper, 74.

Draper jokes he’s not only the book’s author, but he’s the marketing and sales team as well. So, if you’d like to order a book, which costs $21 (tax included), email: rustydraper@rogers.com

Dress for Success celebrates Giving Tuesday with free concert
Oct 26, 2020 6:45 PM
Comments
We welcome your feedback and encourage you to share your thoughts. We ask that you be respectful of others and their points of view, refrain from personal attacks and stay on topic. To learn about our commenting policies and how we moderate, please read our Community Guidelines.