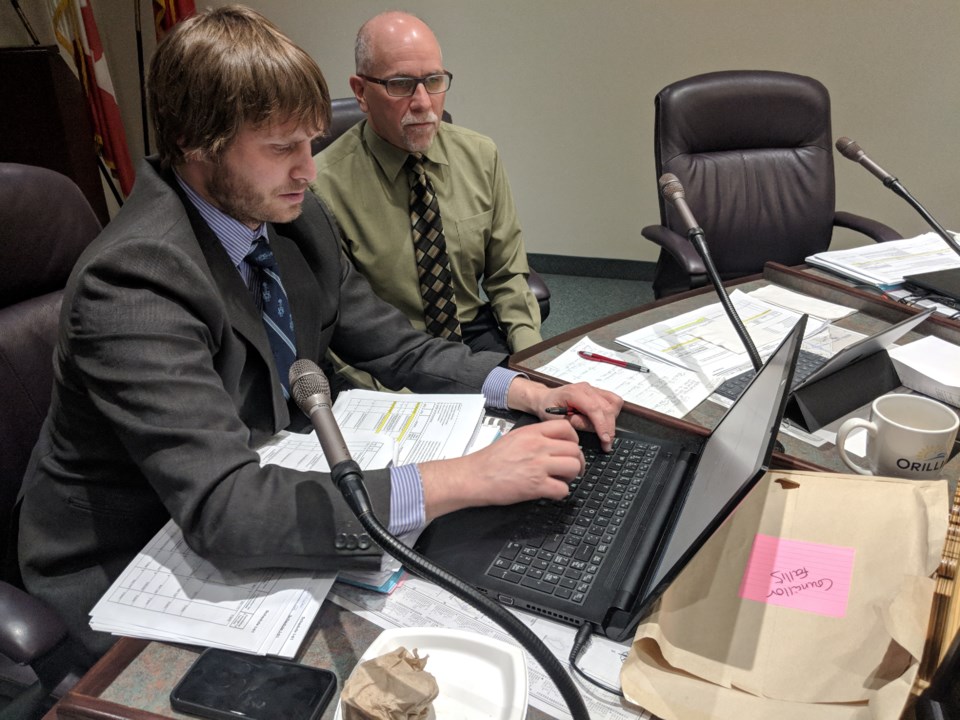 On a long day marked by dry numbers and tame questions, things got a little wild deep into eight hours of line-by-line budget deliberations Wednesday.

Fowl feces became the focal point of a lively discussion when councillors debated a request to earmark $20,000 for “goose control.”

Ray Merkley, the director of parks recreation and culture, said the request is a result of “increased goose presence” at both Moose Beach and Couchiching Beach in addition to several sports fields.

It’s not a new problem. And it’s a growing problem.

Merkley said several years ago, the city committed about $25,000 annually to help control the burgeoning goose population; several strategies were tried without success.

This time around, Merkley is suggesting the city try an “egg oiling” strategy that has worked in St. Thomas. The idea is to apply oil to eggs, so they don’t hatch. Over years, it can diminish the fowl population.

Coun. Mason Ainsworth and Coun. Jay Fallis both questioned the “vagueness” of the strategies under consideration and wondered if more study would be a better plan.

However, time is of the essence and it’s time to act, stressed Richard Bertolo, director of business development.

“This money, in my mind, is critical,” said Bertolo, noting it’s not only a health hazard but has economic ramifications. “If we don’t clean up the beaches, we’re going to have big problems trying to attract tourists to the area.”

“We’re playing with a very valuable asset here,” said Lauer, who noted the swim portion of the popular Northern Triathlon, which attracts almost 1,000 people to Orillia, had to be cancelled two years ago.

‘When you start losing events like the triathlon because your water is not usable it’s not good for your image or your town,” said Lauer.

“What is required here is a concerted and consistent and well-funded effort to solve the problem.”

Hehn said her kids, when they were small, loved to spend many hours at Couchiching Beach building castles in the sand.

“I wouldn’t want my kids playing in that sand right now knowing those geese have been pooping there,” she said.

Merkley said the pesky problem is one of the key reasons swim advisories are on the rise at both Moose and Couchiching Beach.

“Most people believe there is a direct correlation between (the goose droppings and the advisories), but there are other factors,” said Merkley, referencing currents, nearby outflows and rain events.

Bertolo said what’s clear is the goose problem must be tackled.

“Let me be very clear,” he said. “There is a direct correlation between this item and us attempting to solve this and the potential of businesses leaving the community and if the headlines are such that it’s due to this fact, I’d like to remind you about this meeting today.”

In the end, councillors voted to green-light the $20,000 request. However, no decision made during budget committee sessions are official until the budget is ratified Feb. 4.

Wednesday was the first day of two days of deliberations on the city’s $56-million operation budget.

The 42-page operational budget features 166 items for discussion. Council waded through 112 of those items Wednesday. Today, they will go through the remaining 54 items before tackling the “non tax-based” water, waste water, stormwater and parking budgets.

Each of the items in the budget is categorized by staff into six categories that range from items mandated by legislation (salary, wages) to savings proposals, costs to maintain services, new projects or new service levels, and non-recommended requests.

There was not much controversy and some positive financial news Wednesday.

For example, a seasonal parking enforcement officer hired last year to deal with the new boat trailer parking rules at the port will not have to be re-hired due to compliance.

A continued spike in development is also paying dividends. Revenue from building permits is about $158,000 higher than anticipated, while an extra $123,000 is in the city coffers thanks to a new lease agreement with Nordia that included a rent hike, utilities savings and recovery of property taxes from the tenant.

Most of the items were minor. For example, there was little debate as council approved $5,665 to allow the Orillia Public Library to be open more Sundays.

There was some concern expressed about the city’s transit contract, which will be going up $106,891 in 2019. It’s the annual increase negotiated as part of the five-year deal with TOK Transit signed in 2017.

New staff were also approved. A building inspector, a graphic designer (to be shared throughout city departments) and $41,000 for a reorganization of Treasury Department staff were all OK’d.

Today, the line-by-line review continues at 9 a.m. at the Orillia City Centre.

If council heeds staff’s recommendation, the budget hike is expected to end up at about 2.95 percent.

Coun. Ralph Cipolla opened the session Wednesday saying he will try to keep the hike in line with the Cost of Living Index, which is 2.3 percent.

Council will deal with the operating budget next Monday and Tuesday. Ratification is slated for Feb. 4; that’s when decisions will be final.