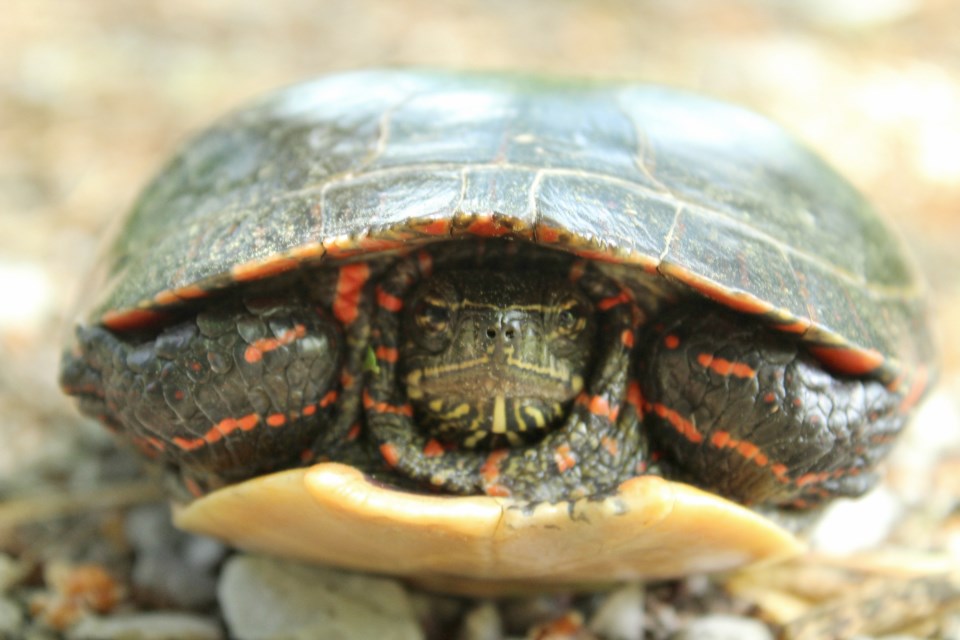 This midland painted turtle was spotted recently off of Bass Lake Sideroad in Oro-Medonte. It has been deemed a species at risk by the Committee on the Status of Endangered Wildlife in Canada. Nathan Taylor/OrilliaMatters

Turtle nesting seems to be increasing in the Orillia area, but it comes at a time when conservationists are sounding the alarm about all of the species found in Ontario.

The Committee on the Status of Endangered Wildlife in Canada recently listed the midland painted turtle as being at-risk, meaning all eight turtle species found in Ontario are now in danger of decline or extinction.

“In our area, we are lucky enough to have some of the greatest concentrations of turtles. This also means that we have a heightened responsibility to create conservation areas and safe spaces for the continued success of these species,” said Abbie Kent, a director with the Orillia-based non-profit Kids for Turtles.

While the organization has received fewer calls about turtles being hit by cars this season than it did last year, it has received more frequent reports of turtles nesting.

”This is great because it means that our turtles are making it to reproductive age and we are seeing them begin to annually lay eggs,” Kent said. “However, turtles are notoriously bad for choosing dangerous nesting sites. The sandy shoulder of roadways provides an appealing location for female turtles and, as result, we are seeing them hit by cars.”

The stubborn reptiles aren’t likely to change their nesting habits, so Kids for Turtles implores people to do what they can to keep the animals safe.

“As wetland ecosystems continue to decline and humans expand into these spaces, we can only expect to see continued devastation among turtle populations,” Kent said. “However, there is always silver lining. We are starting to see increased awareness around the importance of turtles to our ecosystems. Community events such as the 2018 Turtle Walks put on by The Land Between raise awareness as well as funds for turtle conservation. These sorts of events are a win for turtles.”

The low number of calls regarding turtles being hit by cars is encouraging, but it’s still early in the season, Kent noted.

In the summer of 2017, Kids for Turtles received about 10 reports of turtles being spotted on roads. Three of them were taken to the Kawartha Turtle Trauma Centre near Peterborough for treatment. Kids for Turtles has received two such calls this year.

“Lack of road injuries this spring does not necessarily mean that our turtles are less at risk, as we have had several calls regarding turtles crossing roadways, but making it safely across by luck alone,” Kent said. “We hope that the tragedy we experienced last season will bring attention to the ongoing issue of turtle conservation in our area.”

But the vehicle is hardly the only enemy of the turtle.

Climate change and urbanization are seeing turtles increasingly come into contact with other predators, such as raccoons and skunks.

“Therefore, it is important that we approach these issues in a number of ways,” Kent said.

Kids for Turtles posts “turtle crossing” signs in the area, advising motorists to be extra cautious during the early spring and summer.

The local group also works with the Kawartha Turtle Trauma Centre through the “Turtle Taxi” program, which relies on volunteers to take injured turtles to the hospital for treatment.

Drivers can help by doing more than simply avoiding turtles and carrying on.

“Another way in which we can get motorists involved is to teach proper handling techniques for moving a turtle off the road,” Kent said.

“We always like to remind motorists that their own safety is of the utmost importance. First, ensure that there is a safe place for you to stop and exit your vehicle. Almost all of our Ontario turtle species can be picked up gently with two hands and moved quickly across the road in the direction they were headed.”

Direction is vital, since the turtles will, if turned around, cross the road again.

The snapping turtle is the only one that requires “special attention” when being helped across the road, she added.

If the snapping turtle must be picked up by hand, she advised people to grab the rear of the shell with one hand and slide their other hand under the turtle’s belly “before steering them across the road like a wheelbarrow.”

Picking a turtle up by its tail can damage its spine.

Those who see turtles crossing the road are advised to report it to Kids for Turtles by calling 705-325-5386 or emailing info@kidsforturtles.com.

Residents can also help by letting the organization know if turtles are nesting on their properties.

“When turtles lay eggs on private property, we are able to put nesting cages over the eggs to protect them from predators within the first 48 hours of laying,” Kent explained.

Kid for Turtles is always in the market for volunteers and community partnerships. Those interested are asked to contact the office, which is located at Tudhope Park, near the Barnfield Point Recreation Centre.

Orillia mayor warns of increased restrictions, enforcement
Apr 1, 2020 7:15 PM
Comments
We welcome your feedback and encourage you to share your thoughts on this story. We ask that you be respectful of others and their points of view, refrain from personal attacks and stay on topic. To learn about our commenting policies and how we moderate, please read our Community Guidelines.