Rusty Draper's book is just what we need during these challenging times
Dec 20, 2020 6:00 PM By: George Czerny 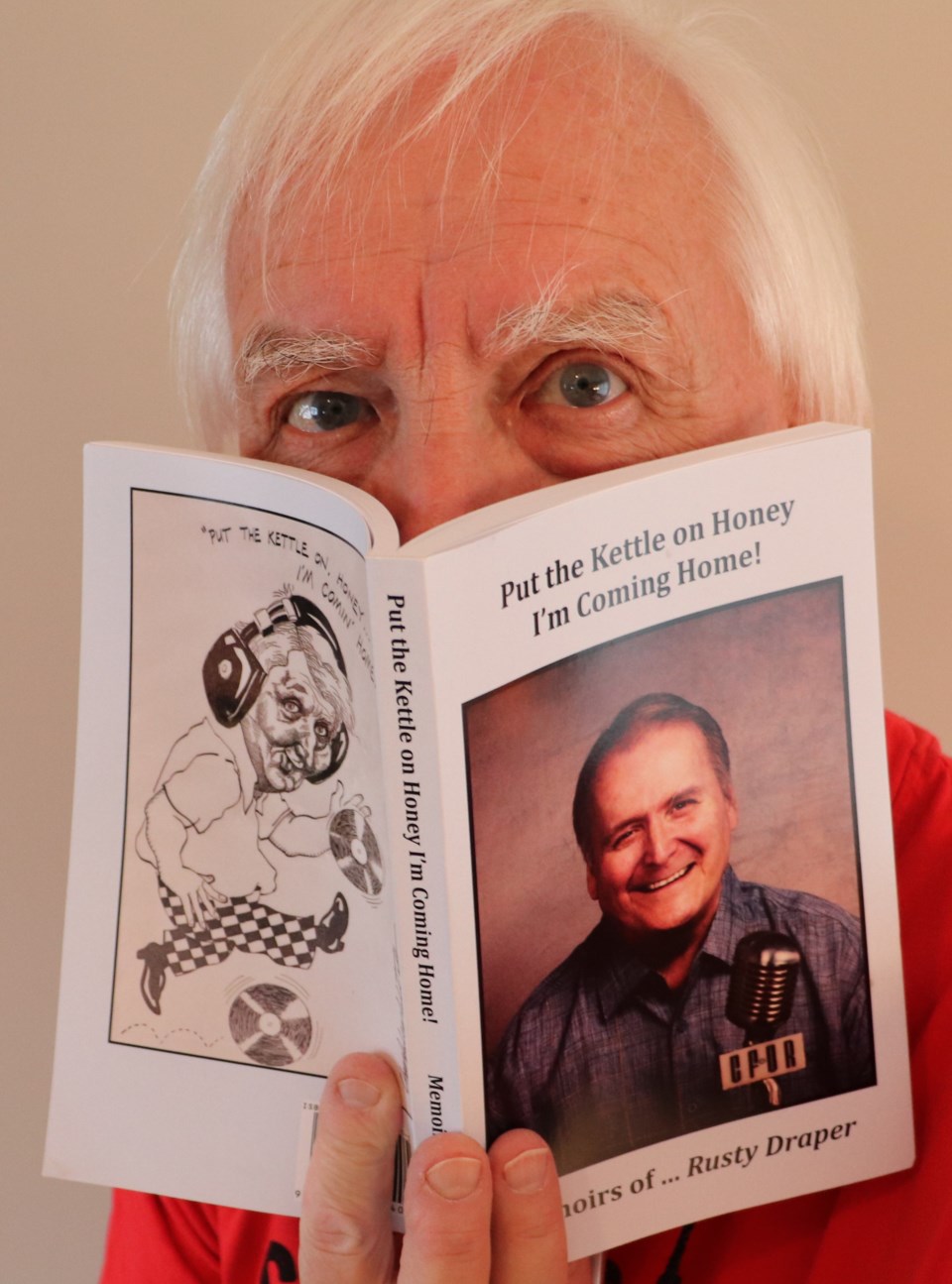 George Czerny is shown with a copy of Rusty Draper's book.Supplied photo

If you have never experienced life at a rock-bottom, you have been fortunate.

Not many people will write candidly about their lives, telling people about their particular rock-bottom. I haven't, but Rusty Draper has.

I don't expect Rusty Draper's recently-released book of true confessions — Put the Kettle on Honey, I'm Coming Home! — on aisle-ends in supermarkets anytime soon. I don't expect the 218 pages of easy reading to make it to the shelves of Big Name bookstores.

All of which is a big pity.

Rusty made a name for himself as the morning-show guy on radio station CFOR in Orillia. Radio-wise, he was to CFOR what veteran morning-man John Nichols was to The Peak, 95.1 FM in Collingwood. Rusty didn't set out to write his book for public consumption. He wrote it for his grandchildren so that they would know about their grandfather and his life. But slowly, other people are finding out about his memoir and finding out the secrets of his life.

What a life it has been!

Growing up in the tiny Muskoka community of Gravenhurst, Rusty — as he prefers to be known — had no idea of where his life would take him. He had no aspirations of fame. No plans to write a book. In fact, like so many young people living in cottage country, before it became the largely-populated cottage country we know today, Rusty enjoyed the simpler things in life: running through a sprinkler in summer, or hiking through woods and smelling the pines.

As one reads Rusty's book, it becomes clearer and clearer that we are all each others' brothers and sisters. I don't mean that in a religious sense, but in a spirit of kinship. Around the world, people have the same basic needs and hopes of safety, food and shelter.

Life wasn't always easy for Rusty. Not in his childhood. Not, at some points in his life, in adulthood. But he soldiered on with an indomitable spirit that comes from growing up not silver-spoon fed. In today's world, where so many people are so very well off and some of them have a sense of self-entitlement, readers of Rusty's book get brought down to earth by many of his true confessions.

There's also humour in Rusty's writings as he recounts some of his adventures. I won't spoil a good surprise for you by telling you about those misadventures, such as the time he was accused of having written his initials on a school washroom wall. Rusty's honesty is sometimes self-depreciatory and at other times both funny, or interesting, or both. It's never dull.

There are many authors who have published books about their experiences; good books by fine people, excellent Canadians, who wanted to share their stories. Some made it into the limelight; others did not.

Rusty Draper joins the ranks of such writers as George Daniels — who wrote George Works! — and the late high school teacher, Second World War veteran and local historian, Jack Poste, who wrote Scarp, Bay and Sky. The aforementioned are from Collingwood and in their own right their books are worthy of library shelves, but seldom shall get anywhere beyond their hometowns.

Rusty Draper is following in the writing footsteps of the late J.B. Lamb, once publisher of The Daily Packet and Times in Orillia, who wrote (among other titles) Clap hands, here comes Charlie!

Other writers, such as Order of Canada recipient Dan Needles, whom I call the “King of Rural Funny,” have gained fame with either a Leacock Medal, or sales in bookstores. His many titles include the Wingfield Farm series and True Confessions from the Ninth Concession. Mr. Needles, who lives near Duntroon, is a grounded and experienced writer, former small-town newspaper editor and once worked as an administrative assistant to a provincial member of parliament. He continues to write magazine columns which bring us joy and often ground us.

Rusty Draper's book will ground you. It will fascinate you as you connect with his experiences and remember similar situations that you had. He brings you laughs galore as he writes about topics such as marbles and toilet paper. Other topics range from dyslexia to Rusty, whose given name is Ross, becoming a sleuth.

Rusty became religious as he travelled his life's path. He writes about that, too, with no holds barred.

You will develop a bond with Rusty, as you read his book, as will his grandchildren. You will laugh, you might cry, you will be intrigued by his vignettes. Your heart will go out to Rusty and you will think of him as a friend.

That's a good thing in this pandemic-challenged world of ours.

Rusty is his own book-seller. He can be reached at rustydraper@rogers.com or by clicking on www.rustydraper.com.

George Czerny is retired, lives in Collingwood and has been to Barkway, Ont.