Bridge will close to vehicular traffic on April 8 for one month so repairs can be made to structure's mechanical systems
Mar 29, 2020 3:30 PM By: OrilliaMatters Staff 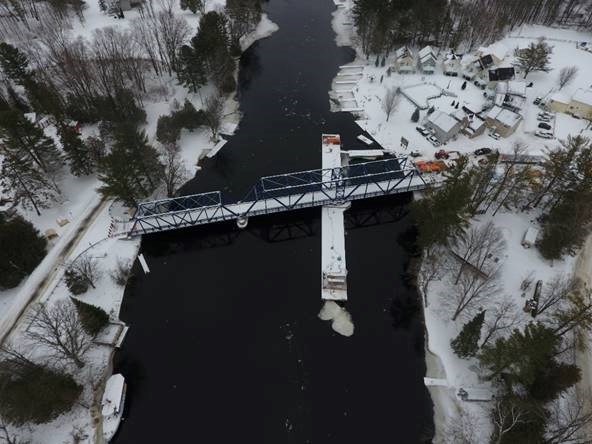 The swing bridge in Washago is once again open to vehicular traffic. Trent-Severn Waterway photo

The Hamlet Fixed and Swing Bridge in Washago is closing again - temporarily.

The bridgewas shut down in December of 2018 before finally being reopened in mid-February.

But officials say the bridge, located at the intersection of Canning Road and Peninsula Point Road, connecting the townships of Severn and Gravenhurst,  will be closing to vehicle traffic on April 8.

The bridge, according to media release, is expected to be closed for approximately one month to address deficiencies. During this closure, the contractor will complete repairs on the mechanical systems which support/swing the bridge, complete final balancing of the swing bridge and complete remaining painting activities.

Parks Canada and Public Service & Procurement Canada (PSPC) are working together to overcome challenges and sustain the re-opening and full function of the bridge.

Parks Canada has formally instructed the contractor to implement a strict work plan in order to mitigate further delays and to adhere to quality control specifications.

For questions or concerns, or to receive email updates regarding this project, please contact us at Ont.TrentSevern@pc.gc.ca and include “Hamlet Bridge” in the subject heading.

For news about this or other infrastructure projects in the area, please visit www.parkscanada.gc.ca/tswseverngravenhurst.

Hamlet swing bridge on Severn River finally back in operation
Feb 14, 2020 4:30 PM
Comments
We welcome your feedback and encourage you to share your thoughts. We ask that you be respectful of others and their points of view, refrain from personal attacks and stay on topic. To learn about our commenting policies and how we moderate, please read our Community Guidelines.