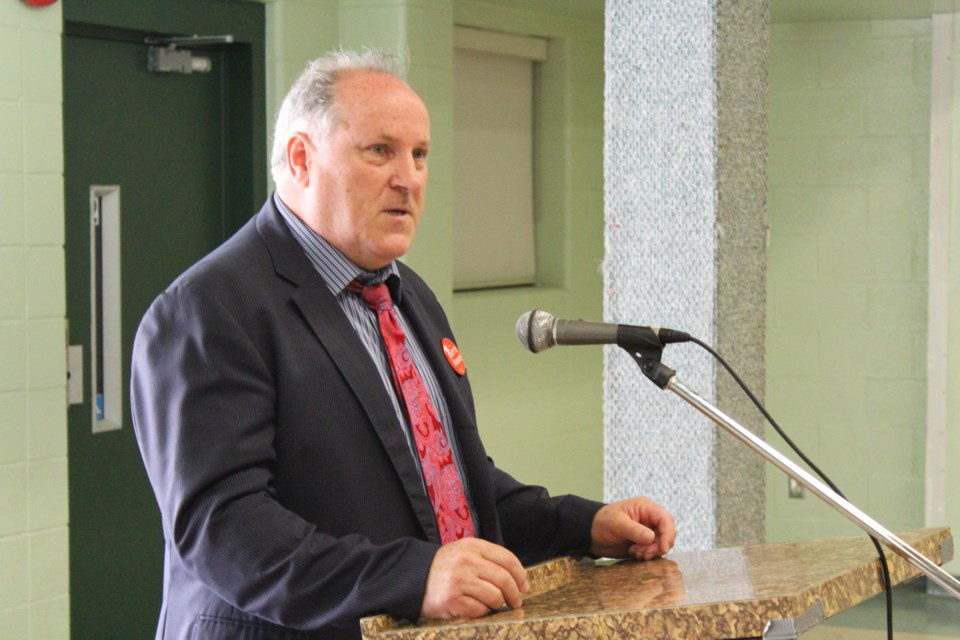 Gerry Hawes speaks Sunday at the Coldwater Arena during a nomination meeting, when he was chosen to represent the Liberals in Simcoe North in this fall's federal election. Nathan Taylor/OrilliaMatters

“I felt a fair bit of emotion when my name was called,” said Hawes, who was running against Sandy Cornell, of Tiny Township, and Cynthia Wesley-Esquimaux, of Chippewas of Georgina Island First Nation. “It was a lot of work and I feel very proud. I look forward to diving into the deep end of the pool and start campaigning.”

Hawes, who works as a policy adviser in the province’s Ministry of Tourism, Culture and Sport, said he will take an unpaid, 15-week leave of absence from his job to focus on the campaign.

After he was declared the winner Sunday, a man approached him and said incumbent Conservative MP Bruce Stanton “is not going to be an easy one to knock off.”

“I know that,” Hawes responded, “but it’s not impossible.”

Simcoe North is seen as a Tory stronghold, but Hawes knows things can change. He was the executive assistant and chief campaign organizer for Paul DeVillers, helping the former Liberal Simcoe North MP secure four terms.

“I feel I can achieve that success again,” Hawes said.

While the election will include parties other than Liberal and Conservative, Hawes is setting his sights on Stanton.

“The choice comes down to it being Bruce Stanton elected or Gerry Hawes elected,” he said. “I’m not going to go out of my way to criticize the Green or NDP candidates. We agree on a lot of stuff, and the main thing we agree on is we don’t want to see an Andrew Scheer government and we don’t want the local candidate to be a part of that.”

Hawes feels he can appeal to voters of all stripes.

“I am a progressive Liberal, but I totally believe in capitalism. I also believe government must ensure everyone is getting an equitable share,” he said.

It’s his years of involvement with politics and campaigns that will benefit him during this race, he said.

“Gerry needs to apply everything he knows about the political scene and this riding,” said Van Kessel, Hawes’s cousin, who was out supporting him Sunday. “He has that past experience. He just needs to demonstrate to the constituents that he’s clear on the needs of the riding.”

She described Hawes as “an all-around great person.”

“He’s been involved in politics all his life. He knows the system. He knows the issues. I think he’ll do a tremendous job representing Simcoe North,” she said.

During Sunday’s nomination meeting, 186 votes were cast. The riding association does not reveal how many votes each candidate received.

Ramara Township man faces child pornography charges
Jan 24, 2020 4:14 PM
Comments
We welcome your feedback and encourage you to share your thoughts on this story. We ask that you be respectful of others and their points of view, refrain from personal attacks and stay on topic. To learn about our commenting policies and how we moderate, please read our Community Guidelines.