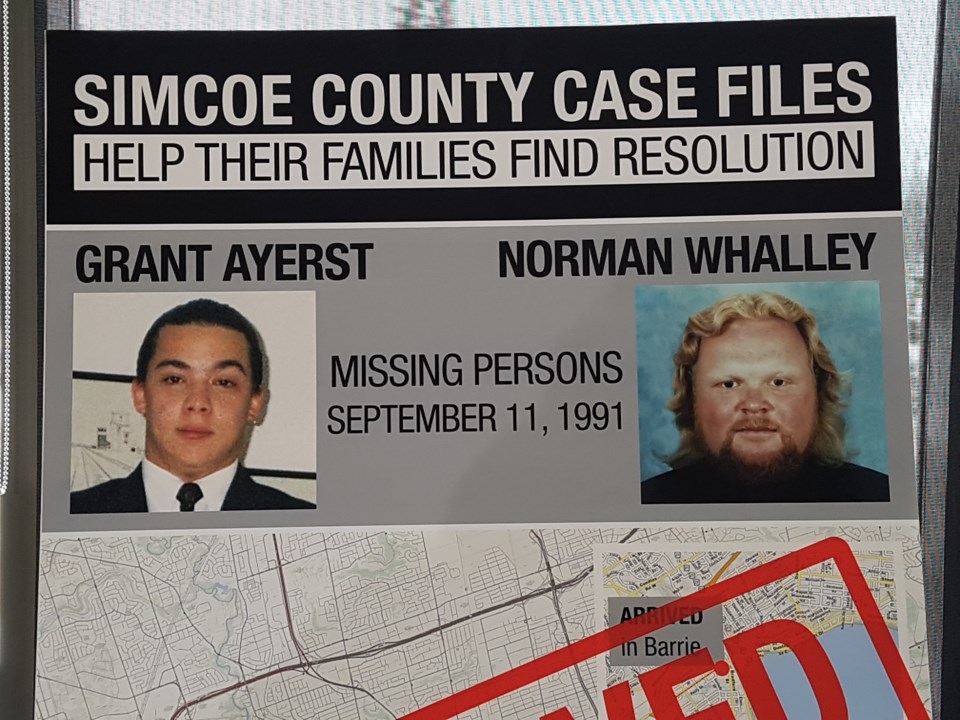 Two murders occurred in 1991, but the victims' bodies were never found and now, according to the courts and police, the identity of the killer will remain unknown.

Michael Claes, 49, pled guilty and was sentenced in September to conspiring with unnamed persons to commit murder, a downgrade from the two first-degree murder charges he initially faced in the 1991 disappearance and deaths of Grant Ayerst, a 21-year-old Barrie man, and Norman Whalley Jr., a 36-year-old man from British Columbia.

Claes was sentenced to one day in jail plus his time served, which was 25 and a half months in pre-trial custody. He was also given a weapons prohibition order for life and an DNA order.

David Glenn Bond, 52, was charged in May 2018 with two counts of accessory after the fact to murder in relation to the case, however charges against Bond were dropped in September.

A joint investigation involving Barrie city police and Ontario Provincial Police into the 26-year-old cold case led to the charges.

“I am aware that these court proceedings provide the families of Mr. Ayerst and Mr. Whalley with none of the answers they want, need and deserve,” said Justice Michelle Fuerst in her reasons for sentencing. “I am sorry that nothing I say today, including the sentence I impose on Mr. Claes, can diminish their heartache, or make the road ahead any easier for them.”

“Our investigation is complete and there is nothing further we can say as the case has made its way through the judicial process,” he said.

According to the court-filed facts of the case and reasons for sentencing, Ayerst moved from Barrie to Vancouver in the summer of 1991, where he met Sandy Wood and Whalley.

At that time, Ayerst entered into an agreement with Wood to transport a large quantity of psilocybin (magic mushrooms) from Vancouver to Toronto to sell them. Whalley was sent by Wood to assist Ayerst in the sale.

Ayerst arranged for two handguns, supplied by Whalley, to be shipped to Toronto via Purolator, and the psilocybin to be shipped via Greyhound Parcel Post.

Once Ayerst, Wood and Whalley arrived in Toronto and received the psilocybin and the guns, Ayerst and Whalley tried to execute the transaction but according to court documents it did not take place as planned.

“Neither Mr. Ayerst nor Mr. Whalley were seen again. Their bodies have never been found.”

According to the transcript, Claes acknowledges that in the summer of 1991, he was approached by an individual who said he had arranged a drug deal but had no intention of paying the dealers, and instead intended to kill them.

“Mr. Claes willingly agreed to participate in the scheme, but before the plan could be carried out, Mr. Claes got cold feet,” said Fuerst. “He withdrew from the conspiracy.”

According to court documents, Claes was not aware of the identity of the targets of the plot, only later learning they were Ayerst and Whalley.

On Sept. 25, 1991, police executed a search warrant at Claes’ residence. They recovered the psilocybin and one of the guns belonging to Ayerst and Whalley. Claes previously pled guilty to possessing the items and served a term of imprisonment for that crime.

Victim impact statements were read during the sentencing on behalf of the families of Ayerst and Whalley.

“Our entire world has been forever changed. For me, the mourning period seems to go on forever,” wrote Ayerst’s mother.

“Time does not heal, so the best we can hope for is one day, to find a way to placate our emptiness,” wrote Ayerst’s father.

Whalley’s brother wrote that Whalley’s disappearance left their father a broken man and his mother with significant mental health issues that required numerous hospitalizations. Whalley’s father has since passed away.

In her reasons for sentencing, Fuerst acknowledged that while Claes amassed a number of criminal convictions over the years, his criminal record stopped in 2002. During these proceedings, he was been held in protective custody at his own request.

Fuerst took many aggravating factors into consideration when determining her sentence, including that the conspiracy was motivated by activity that was, in itself, criminal.

She also acknowledged mitigating factors, such as Claes pleading guilty as well as the challenges of bringing historic cases to trial.

“This is a sign of remorse and a willingness to accept responsibility for his crime. A guilty plea is always an important mitigating factor,” said Fuerst.

“The murders of Mr. Ayerst and Mr. Whalley have spanned 28 years. In that time witnesses have died, moved away or been affected by health issues,” she said. “It cannot be determined when, where or how they were murdered. Investigations in cases such as this are challenging to bring to successful prosecution.”

Upon his release, Claes plans to return to work as a long-haul truck driver and will live with his mother and father initially.

“I wish to be clear that by entering into a conspiracy to commit murder (charge)... Mr. Claes committed a despicable offence,” said Fuerst.

Epilepsy Simcoe County hosting online raffle
Jul 11, 2020 11:15 AM
Comments
We welcome your feedback and encourage you to share your thoughts. We ask that you be respectful of others and their points of view, refrain from personal attacks and stay on topic. To learn about our commenting policies and how we moderate, please read our Community Guidelines.