Historic Titanic-era SS Keewatin could pull up anchor and move

Skyline Investments plans to 'gift' the ship to a Kingston museum if it's successfully vetted by the department of Canadian Heritage
Nov 24, 2020 11:30 AM By: Andrew Philips 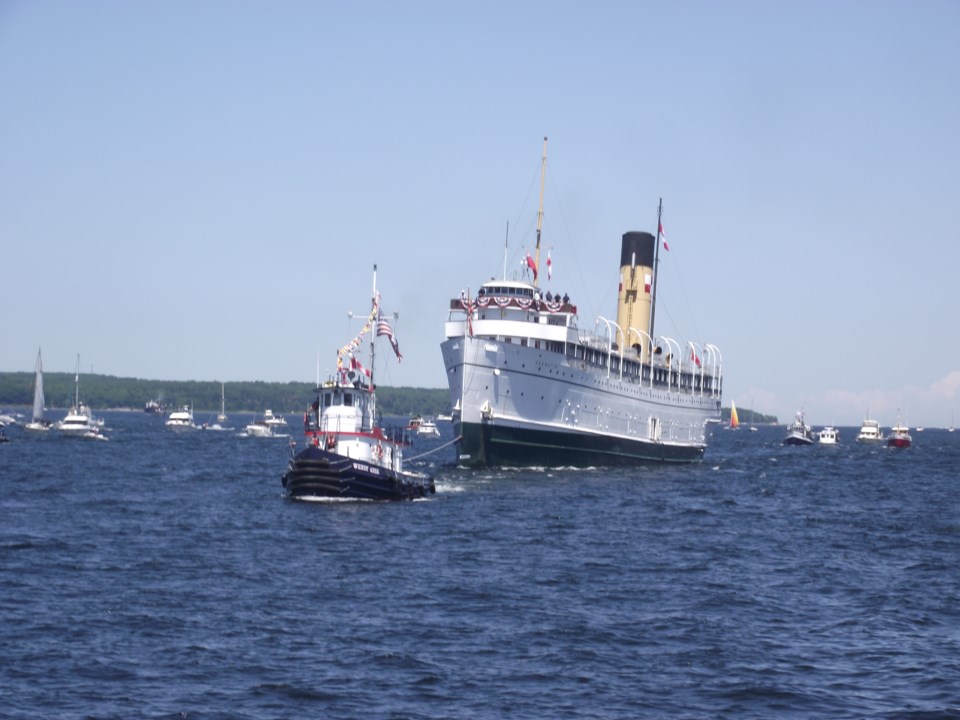 The SS Keewatin was met with great fanfare when it returned to its Georgian Bay home in 2012. Andrew Philips file photo

The possibility the SS Keewatin will be leaving its home port forever now seems very real.

Skyline Investments is actively working with a Kingston marine museum to move the Titanic-era ship to the eastern Ontario city from Port McNicoll.

Skyline CEO Blake Lyon says the Keewatin will be "gifted” to the Marine Museum of the Great Lakes (MMGLK) with the museum currently being vetted by the department of Canadian Heritage to see whether it would be a “good host.”

Lyon said when the RJ and Diane Peterson Keewatin Foundation (aka the Friends of Keewatin) failed to acquire the appropriate heritage designation last year to keep the ship in Port McNicoll and hasn't yet reapplied despite "significant feedback" on its application from Canadian Heritage, then-president Eric Conroy began pursuing alternative locations.

"We need to get find somebody else that could that could qualify to take the ship as a donation and receive the designation process, which is pretty rigorous. And so he (Conroy) brought forward Kingston and Kingston has put in their application."

Conroy, who served as president and CEO of Friends of Keewatin for 12 years, stepped away from the role with the non-profit in August.

MMGLK board chair Chris West confirmed his group is very interested in bringing the ship to the Limestone City next year.

"The museum spent hundreds of hours over many months appraising the ship and devising a plan to best preserve and care for her for posterity," West said, noting Heritage Canada is now reviewing the museum’s plans with a view to the ship being deemed Canadian Cultural Property.

West said the museum also has decades of experience in conserving and curating an historic ship, the Alexander Henry.

"Most essentially, we have an historic Dry Dock, which when drained will enable the Keewatin to be stabilized, preserved and displayed in ideal conditions, in perpetuity."

Lyon said there aren't a lot of sites that offer both amenities like the Dry Dock heritage site and dedicated plans to ensure the ship's longevity.

"Heritage needs to know that you could support the ship financially and that you have the expertise to maintain it as a heritage object," he said, noting Skyline would prefer the ship remain in Canada rather than being acquired by a foreign interest or sold as scrap.

"I don't think that is in anyway where any of us would want to go. So the next best thing was to find somebody else in Canada that could qualify. And Eric found Kingston and he made a big presentation to them about why it would the good for them to look after it."

But the volunteer Friends of Keewatin group isn’t throwing in the towel.

Wayne Coombes, president of the Friends' group, said that while the ship’s future isn’t within its direct control, it wants to see Skyline honour its earlier commitment to keep the Keewatin in Port McNicoll.

“We remain focused on convincing the ship’s owner to fulfill its contractual obligation to deliver the ship to our charity… the charity it founded for the express purpose of receiving the ship,” Coombes said.

"And its moral obligation to satisfy the promises it made to the community; promises which resulted in tens of thousands of hours of volunteer labour donated to restoring and operating the ship as an historical attraction, and thousands of personal artifacts donated to the charity for display on the ship.”

But Lyon said Skyline only wants to find a suitable home for the ship and has been patiently waiting for the past three years for the local group to successfully complete the Canadian Heritage application process.

"I mean, we gave all the support, we spent hundreds of thousands of dollars on legals trying to get them approved.," he said. "And I worked pretty closely with Eric Conroy in that regard. And we spent countless hours, he spent an enormous amount of time, trying to get them qualified."

The non-profit Keewatin group announced recently that it plans to resubmit its application to acquire a Category B designation with the Department of Canadian Heritage to provide Skyline with a tax receipt in exchange for keeping the ship in Tay Township.

Built in Scotland, the vessel was launched on July 6, 1907, five years before the Titanic. It was retired in 1966 after spending almost 60 seasons transporting passengers. Since returning to its Port McNicoll home port from the United States in 2012, the Edwardian-era passenger ship has proven to be a bona fide hit with both area residents and those from further afield.

As well, Coombes has sent a letter to West outlining the local group’s position and providing some context related to the ship’s place in Port McNicoll.

In it, Coombes notes that the ship was committed to be donated to his group in the buy/sell agreement of November, 2011 between her previous owner, RJ Peterson, and her current owner.

“This commitment was confirmed in public utterances by the president of her current owner during the ship’s return from 45 years in Michigan, and enshrined in the articles of incorporation of our charity,  which was created by her current owner,” wrote Coombes, who throughout the letter never refers to Skyline by name.

“On the strength of that commitment, hundreds of volunteers contributed tens of thousands of hours to the restoration, care and maintenance, and operation of SS Keewatin as an historical attraction over the last 8 years.

“And hundreds of residents… including the families of former CP employees and crew… have donated  thousands of objects as display artifacts, in many cases objects originally purchased from CP when the operation here was wound down in the mid ‘60s.”

Coombes also provides some background about “the world’s last Edwardian-era passenger steamship” and its place in Great Lakes history.

“Port McNicoll was the destination of the boat train, which brought passengers to cruise the Great Lakes on Keewatin, or her twin Assiniboia, on their way to a tour of the Western Canada on  ‘The Canadian’ and visitors (today) experience that presence.

“Port McNicoll was created by Canadian Pacific and in 1912 became home for all five ships and subsequently the site of Canada’s second  largest grain elevator as well as Canada’s longest wooden trestle. When the steam age ended, CP abandoned Port McNicoll and RJ Peterson saved the ship from the breakers.”

From there, Coombes outlines the important work volunteers did in turning Skyline’s $1 million investment into an independently-valued $48.7M (“but  truly priceless”) Canadian artifact that should remain in Port McNicoll.

“The promise was made, we’ve done the work and her story is here,” Coombes noted.

He concludes: “We don’t think that’s right. We thought you should know.”

Both West and Lyon said they're up is keenly aware of the passionate attachment Port McNicoll feels to the Keewatin.

"We salute and hugely appreciate the extraordinary work of community volunteers who contributed so much to the ship’s care and display in Port McNicoll," West said. "Should we be fortunate enough to receive the Keewatin, they will not be forgotten.

"Rather, we will be reaching out to the Friends of the Keewatin to honour them, to consult (with) them and to ensure their contributions to the heritage of the Keewatin are never forgotten."