'I don’t believe I would have had the opportunities to be as successful as I am now without Fern Resort,' says employee of 40 years
May 7, 2021 5:45 PM By: Tyler Evans 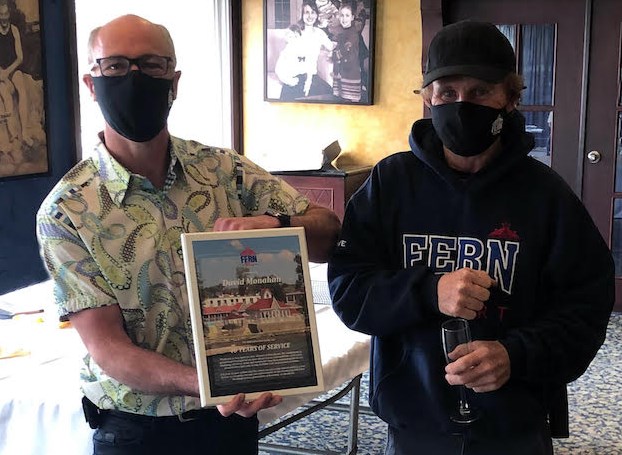 It's not often these days that a person spends four decades at the same job.

But Dave Monahan has done just that. This week, Fern Resort honoured the manager of its maintenance department, whose career started at the resort in 1981 on a fluke.

“I went to the resort to attend a party and I ended up spending the night because I drank too much. The next day my brother, who worked there, came up to the room I was staying in and told me they needed a dishwasher, and they asked me to do it,” Monahan explained.

Monahan had planned to move out west that year, but instead, he stayed at Fern Resort and eventually worked his way on to the maintenance team.

“I wasn’t planning on being there for 40 years, but the people who work there are like one big family, and the Downings have always looked out for me,” he said of the family that owns the iconic Ramara facility.

“When I first started there, I didn’t have much going for myself and was headed down the wrong road in life. I didn’t have any goals or a future," Monahan conceded.

Over the years, Fern Resort assisted Monahan with his schooling in order to obtain relevant certification. Today, Monahan is a wastewater treatment plant operator level two, a drinking water operator level one, and a pool operator.

“Thanks to Fern Resort, I became a respectable citizen. Before this job I could have never dreamed of having the life I live now,” he said.

While working at Fern Resort has been an honour and a privilege for Monahan, he admits he did go through many learning curves over the years.

“There were a few times I probably should have been fired, but I think the owner, Robert Downing, liked me and saw some potential in me,” he said.

“Robert was my mentor, and now his son Mark is carrying on that job (and) he always looks after me.”

Monahan says he owes his life to working at Fern Resort; he even met his future wife through his job.

“We ended up getting married, having three children, and buying a home. I don’t believe I would have had the opportunities to be as successful as I am now without Fern Resort,” he said.

After 40 years, Monahan is just as passionate about his job as when he first started; the unpredictability of the resort is what keeps his fire for the work ignited.

“You never know what you’re going to be dealing with at Fern. Each day I go into Fern I never know exactly what’s going to happen,” he said.

“I like the comaraderie that goes on between the staff, I like meeting new people. I get to know people who come back each year, and who gets to work at a resort? That’s pretty cool in itself.”

“I like to help the young staff we have here, I try to have their backs and look out for them the way Robert did for me,” he said.

“When you have a resort that is coming up on being 126 years old, there is a lot of inheritance of things that those years give you, and his knowledge of this place inside and out, and that knowledge, it's invaluable for when we need to do things,” he said.

“When the power goes out at three in the morning, he is up, he is here, and he is getting things up and running again because we are a 24/7 business.”

Downing says Monahan’s commitment to Fern Resort, the staff, and the guests is astonishing.

“He is the first guy to put his arm into a septic tank and get it up and running, he’s just an amazing employee that way,” he said.

“We couldn’t ask for a better manager of maintenance. He’s just fantastic.”