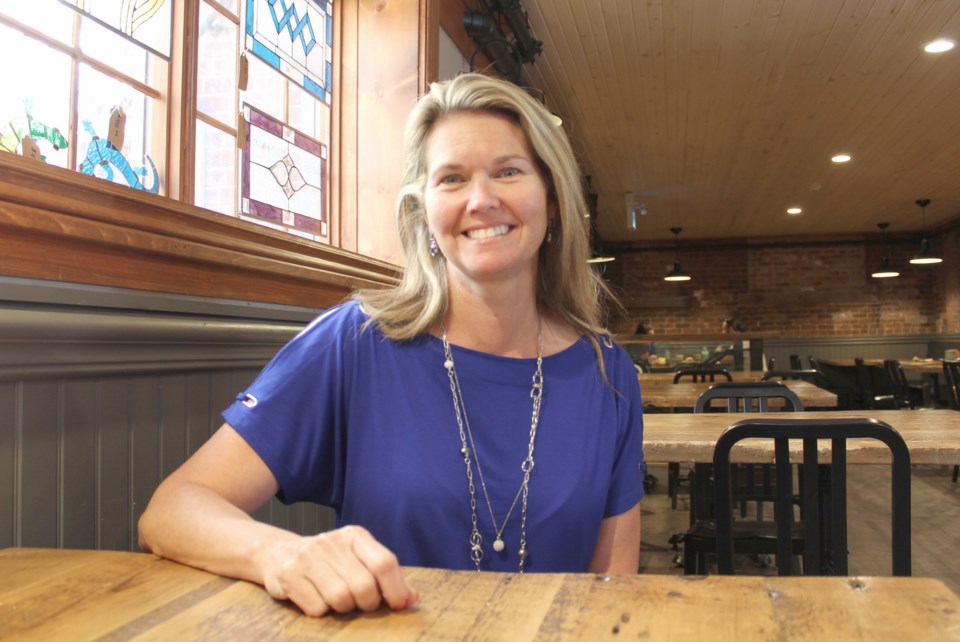 Jill Dunlop is ready to get to work after being elected Simcoe North MPP in the June 7 vote. Nathan Taylor/OrilliaMatters

The blue wave that swept all of Simcoe County this month has Jill Dunlop feeling confident about the role the region will play at Queen’s Park.

Dunlop was elected Simcoe North MPP, receiving almost 47 per cent of the votes cast in the riding during the June 7 election. That Tory trend extended to every riding that includes Simcoe County.

“Having MPPs of the same party representing this area is a positive,” Dunlop told OrilliaMatters during an interview Tuesday morning at a downtown Orillia café.

While Simcoe North has long been represented by conservatives, the provincial picture was different. The Liberals were in power for 15 years.

When Dunlop was knocking on doors during the campaign, she said she spoke with many people who were “concerned that the GTA gets a lot of the money” and attention.

Simcoe County voting in all Progressive Conservative representatives should send a strong message to the party’s leader, premier-designate Doug Ford, that this region is worthy of his support, Dunlop said.

“It’s my job to make sure that we’re on the radar. With that majority government comes the ease of being able to get what we need for this area.”

The substance will start to come June 18, when the first day of non-partisan MPP training will take place. The parties won’t go their separate ways. Rather, all of those elected last week will come together for the meeting — the first of two.

Dunlop is looking forward to it, and she spoke of the importance of MPPs working together despite their differences.

“We’re representing all of our constituents,” she said, acknowledging 53 per cent of Simcoe North voters did not throw their support behind her. “And, when you’re at Queen’s Park, you have to work with all of the MPPs, regardless of the party.”

On election night, after it was determined the PCs would form a majority government, Garfield Dunlop, who represented Simcoe North from 1999 to 2015, said his daughter “won’t be a Queen’s Park type of person” and would instead concentrate the bulk of her efforts on the riding.

Jill Dunlop seemed to confirm that when asked if she was hoping for a position in Ford’s cabinet.

“There are lots of amazing candidates with prior experience,” she said. “I would be honoured to be selected, but my goal is to be a good MPP in Simcoe North.”

She also noted Ford is expected to reduce the number of cabinet ministers, possibly combining portfolios as part of his promise to find “efficiencies.”

While Dunlop intends to keep Simcoe North top of mind, she will continue to draw attention to an issue that is felt across the province: a lack of skilled tradespeople.

It was an area of concern for her father, and it was something she often brought up during all-candidates meetings.

While high schools have been offering more opportunities for those interested in skilled trades, it hasn’t been enough to keep up with the demand for workers. Dunlop wants to see more awareness and education about the trades being offered at the elementary level.

“University isn’t for everybody,” she said, adding there is “still a negative stigma around trades, for some reason.”

She said she will work with colleges in the hope they will take more of a lead on offering trades programs, reducing the onus on high school graduates to secure their own apprenticeships.

“We’re losing people who are interested at that point because they can’t find an apprenticeship,” she said.

Her focus on the trades earned her praise from Ontario Chamber of Commerce president and CEO Rocco Rossi, who told her, “Keep it up,” Dunlop said.

Her interest in trades has been influenced by family. Her dad was a plumber, and her brother stuck with the trades.

Family played an important role during her campaign, too. No strangers to politics, the Dunlops were tireless supporters of her provincial pursuit.

“It was very humbling,” she said. “I’ve gone through it as a volunteer for my dad, but being the one whose name is on the signs is completely different.”

She feels it set a good example for her three teenage daughters, whose friends were also exposed to the process during the campaign. When her 19-year-old daughter voted, some of her friends went along and cast their ballots, too.

“Get them excited about it right from the beginning,” Dunlop said.

During her victory speech on election night, Dunlop broached a subject she had intentionally avoided throughout the campaign — that, if elected, she would become the riding’s first female MPP.

“I just wanted people to know that they were voting for me because I was the right person for the job,” she said Tuesday. “It didn’t matter if I was a woman or a man. You have to show that you’re your own person, that you’re not just getting by on your name.”

That’s not to say she doesn’t have a reputation to live up to. Sometimes it seemed as though her dad had the ability to be in three places at once.

“He was known for attending all kinds of events, whether it was an 80th-birthday party or an AGM,” she said.

To keep up with the demands of being an MPP, Dunlop will leave her job as an instructor at Georgian College, where she has taught on a contract basis for eight years. After this summer’s online course in human behaviour in the workplace, it will become all about politics for Dunlop.

“I really appreciate everything Georgian has done for me and for the community,” she said. “I’ve really enjoyed working with the students.”

Ford and his PCs will hold their first caucus meeting next Tuesday.