Lighthouse looking to raise $140K from Coldest Night of the Year 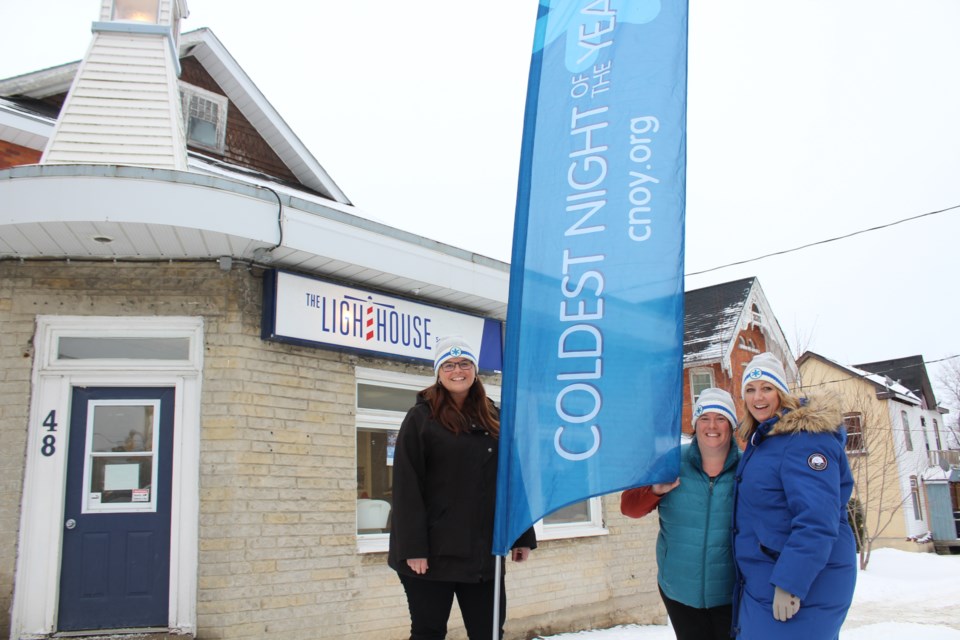 The Lighthouse is getting ready for the annual Coldest Night of the Year fundraiser, happening Feb. 22. Pictured, from left, sporting the toques that will be handed out to all participants, are Linda Goodall, executive director, Trish Holloway, operations manager, and Lynn Thomas, development co-ordinator. Nathan Taylor/OrilliaMatters

The Lighthouse Soup Kitchen and Shelter is hoping the record-breaking fundraising trend will continue with this year’s Coldest Night of the Year.

With the Orillia walk raising the most, per capita, in Canada for the past three years, “we figured $7,000 more was not too grandiose a goal,” said Lynn Thomas, the Lighthouse’s development co-ordinator and event lead for Coldest Night of the Year.

“The community awareness has grown over the past seven years,” she said. “We have really fantastic community members volunteering on this committee who are very invested in this event and everything we’re doing.”

The local fundraiser has been so successful over the years, the Blue Sea Foundation — which oversees Coldest Night of the Year on a national level — has referred representatives from other communities to Orillia to find out the secret to its success. In short, “it’s a unique community,” Thomas said.

“Orillia really does look after its own.”

This year’s event will take place Feb. 22 at a new venue — Twin Lakes Secondary School. Registration will start at 4 p.m., followed by opening ceremonies at 5 p.m. Everyone who registers will receive a free toque. There will be a photo booth and activities for children, and Elsa will be on hand for face painting. The walk will follow, with two-, five- and 10-kilometre routes available.

Participants will pass the Lighthouse on Peter Street as well as the future home of the Lighthouse community services hub on Queen Street. There, the Salvation Army will have its mobile response unit on site, where walkers can enjoy some refreshments.

When they return to Twin Lakes after the walk, more food and drink will be available.

Sixty-five teams took part last year, and the goal is to have 70 this year. Thomas said the event is ideal for individuals as well as teams from local organizations and businesses.

“It’s exciting to see the community come together. There’s a real energy that night,” she said. “It brings people together and it just feels good at the end of the day.”

The Lighthouse’s visitors appreciate it, she said, noting many take part in the walk and volunteer.

“This is their community and they’re passionate about giving back. They’re part of our team,” Thomas said. “A person experiences homelessness, but this isn’t what defines them.”

Proceeds from the event will go toward the Lighthouse’s operations and the Building Hope campaign for the new hub. There is still almost $1.5 million to be raised as part of the capital campaign.

For more information about Coldest Night of the Year, click here.

Scout-Guide Week in Orillia marked with flag raising
Feb 24, 2020 7:30 PM
Comments
We welcome your feedback and encourage you to share your thoughts on this story. We ask that you be respectful of others and their points of view, refrain from personal attacks and stay on topic. To learn about our commenting policies and how we moderate, please read our Community Guidelines.