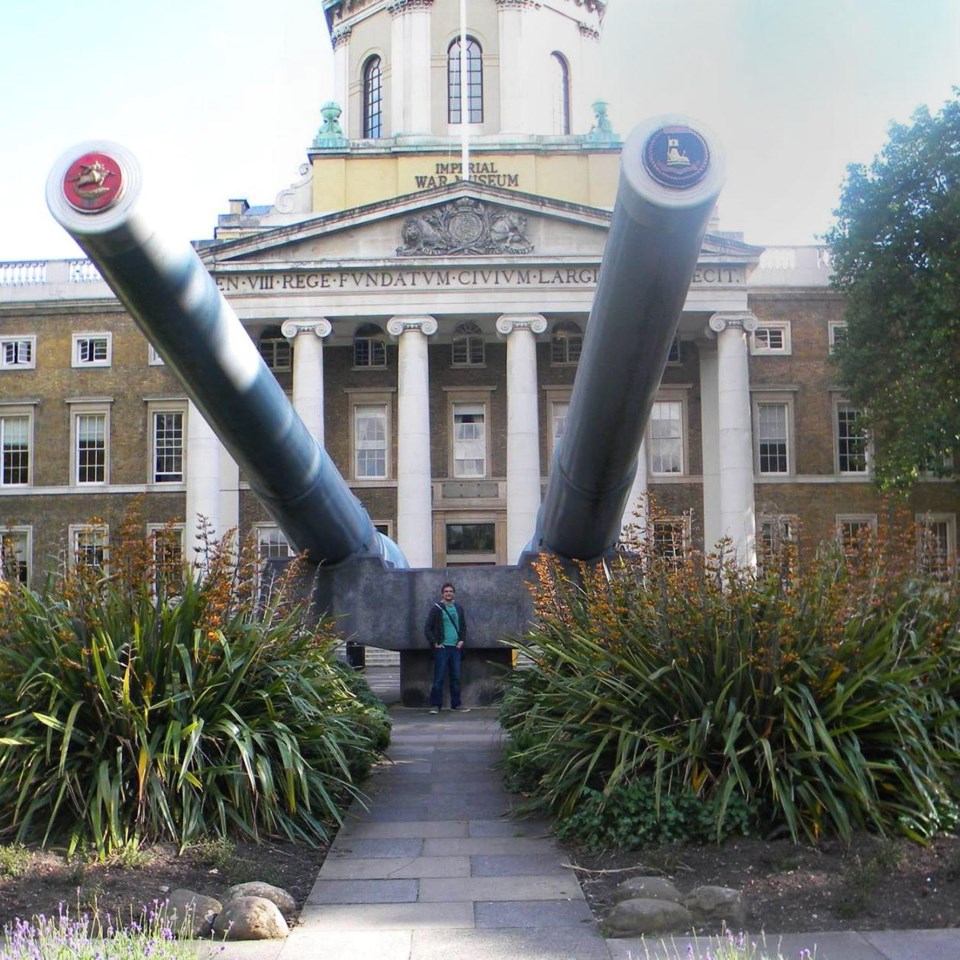 Orillia Author Kyle Falcon in front of the Imperial War Museum in London where he did much of his research for his book, Haunted Britain. Contributed Photo.

Orillia author Kyle Falcon has signed a deal with Manchester University Press in England to publish his book, Haunted Britain, based on spiritualism and World War I.

The 34-year-old Patrick Fogarty Catholic Secondary School graduate is excited to have his first book published by such an internationally renowned publisher.

“When I was looking to shop this book around they were on my list of who I was interested in publishing with. They also run a series on war and culture, so it was a good fit,” he said.

Falcon’s book is about how the First World War haunted Britain. Between 1914 and 1918, more than 900,000 men from the British empire died, and about half of them have no known grave.

“When students go to France or Belgium, one of the first things they notice is that a significant number of graves are identified as an unknown body, there is about 200,00 of those,” Falcon explains.

“There are also 250,000 people from the British empire who died and can’t even be accounted for. They are completely missing, which has had a profound psychological effect on those who experienced the war - both the people at home and on the front.”

Falcon’s book takes a look at stories from people who have reportedly seen the ghosts of missing soldiers crossing the British empire and onto battlefields. The story also mentions concerted efforts of those who have tried to contact the dead in order to receive closure.

The idea for the book came to Falcon when he was studying at Nipissing University back in 2008.

“We were reading this memoir by a Canadian soldier, Will R. Bird, who claims that the ghost of his missing brother saved him from certain death at Vimy Ridge,” he explained.

“I found that interesting because up until then I always associated the First World War with modern technology and science; it was the first airplane war, the first submarine war, the first tank war, so it was strange to me that there was this supernatural element which is something I wanted to explore further.”

Falcon’s interest in the British empire and the First World War stem from a family link; his great grandfather fought for the British in World War I.

To research for his book, Falcon traveled across seas to Europe where he discovered a fascinating tie between the British and the supernatural universe.

“As I was researching, I discovered the British are the central hub of spiritual research movements - séances, psychic phenomenon, telepathy, Ouija boards, and that sort of stuff, so there is a huge interest in this on the British Isles,” he explained.

To this point, Falcon has enjoyed the experience and process of writing a book. He hopes it's the first of many.

“I’ve always loved history since I was a kid, and since my undergraduate degree at Nipissing University, I realized this is something I wanted to do for a living, I want to research and write about the First World War,” he said.

There is no current timeline for the book's release, Falcon says, but he is looking forward to the day he gets to share it with the world.