'I think if everyone tries to make a difference, it would have a positive effect,' says Lighthouse volunteer Larry King
Nov 9, 2018 6:30 PM By: Mehreen Shahid 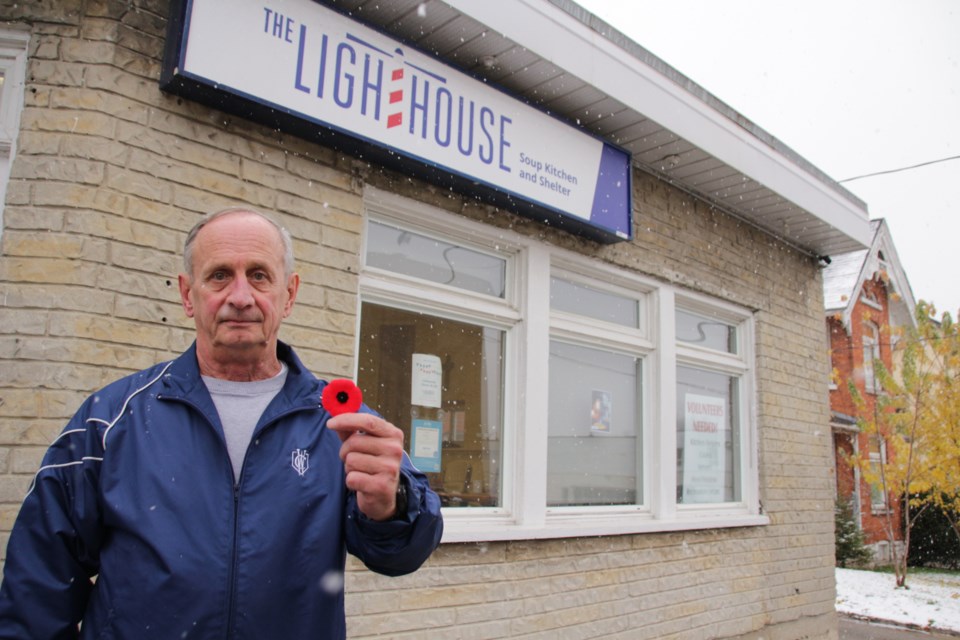 Larry King, Brechin resident and veteran of 40 years, spends six days a week volunteering at The Lighthouse Soup Kitchen and Shelter, so he can give back to his community in some small way. Mehreen Shahid/OrilliaMatters

A soldier’s life is tough, but it can be even tougher getting back to life as usual.

Larry King, a Canadian military veteran of 40 years, takes time to remember his and others' journeys this Remembrance Day.

The Brechin resident, who joined the military when he was only 18, served on several peacekeeping missions during the 1970s and '80s.

“Basic training was very tough, and some guys found it wasn't their cup of tea,” said King. “I stuck through it because I'm stubborn, I guess. I've never actually quit anything, so I wasn't giving anyone the satisfaction of that.”

Being in the infantry, he said, means training for war and drawing up plans of attack.

“It's a lot of physical and mental exertion. Sometimes you're up for 30 hours straight,” said King, who retired in 2012 as a chief warrant officer.

Two years after he joined, King went on his first tour of duty to Cypress in 1974. It was a peacekeeping mission.

“We lost two guys there when we were there,” he said, recalling the time in the conflicted country.

When people find out King is a veteran, they ask if he’s ever killed anyone or if he was shot at.

The answer to the first question is a quick no, but he takes his time answering the second one.

“I was 20 years old when it happened,” said King, recalling the incident in Cypress like it was yesterday. “We were investigating a UN house and heard shots and saw the marks on the wall we were creeping next to.”

The next thing King remembers is being on the floor.

“That's the training,” he said. “Then, the master corporal shone the flashlight on his cap to indicate we were UN. When the shooting didn't stop, we crawled back around and then waited until we could get back to safety.”

It was not until much later it hit King how close he’d come to losing his life.

Four months after the incident, King was sent to Egypt.

“I was giving logistics support,” he said of his six-month tour of duty. “We delivered fuel and all materials to a camp about 60 kilometres outside of Cairo to other UN troops.”

For a number of years following that, he went to Sierra Leone and Egypt. And there was very little home time between tours, he added.

Losing a close friend while in Germany for training deeply impacted King.

“That affects you forever,” he said. “I feel you get impatient and angry at something you'd never get angry at.”

“Especially men, because they think they're not enough of a man,” he added. “A lot of them don't say anything and they mask their feelings or conditions because they don't want to be left out of the loop. They want to go back on tours with their guys, their comrades.”

The truth is, King said, admitting to having problems won’t change how anyone looks at you.

“No one is going to think negatively of you, but that's how they see it,” he said.

And that’s Remembrance Day is important; it reminds veterans that people care, said King, who tries to attend Remembrance Day ceremonies each year in Brechin, Barrie and Petawawa.

“It's good having these memorials to fallen soldiers, whether it's air force, navy or army,” he said. “We need to carry on the tradition of having parades and gathering around the cenotaph. All people should be proud to wear a poppy.”

All veterans, not just the ones who have passed away, should be honoured, he said.

“There's a hell of a lot of them out there who are suffering from post-traumatic stress disorder,” he said.

VETS Canada estimates there are 6,000 to 7,000 homeless veterans nationwide who struggle with undiagnosed mental health issues, physical disabilities, addictions and barriers to employment.

King said he feels the government hasn’t delivered what it promised to soldiers. It’s not charity; it’s their right, he added.

“Thank you to the wives for putting up with all the crap we hand out,” he said. “You have to be a very independent woman to be a military wife. My wife was very proud to be part of the military; she attended all the events and was at all the parades.”

King, who lost his wife a few years ago, now volunteers at The Lighthouse Soup Kitchen and Shelter six days a week.

“I started off because I've seen a lot of bad stuff,” he said. “There's no poorer country than Sierra Leone or conditions as bad as I've seen in Egypt. I've seen kids begging for food and money and sleeping on roadsides.”

King recalled times in Sierra Leone when he and other soldiers helped build markets, dig wells, and hand out free soccer balls to kids.

“Seeing those conditions in other countries made me realize I'm fortunate enough to have what I have, and now I want to make a difference,” he said talking about his volunteer work with the shelter. “I think if everyone tries to make a difference, it would have a positive effect on everything.”

He started out coming two days a week to help out in the kitchen or cafeteria. He said he feels good that he’s giving back to the community, even if it’s in a small way.

“It's sad that we have the problem that we do,” said King, referring to homelessness.

Heat wave reminds us of the importance of trees, shade
Jul 12, 2020 11:30 AM
Comments
We welcome your feedback and encourage you to share your thoughts. We ask that you be respectful of others and their points of view, refrain from personal attacks and stay on topic. To learn about our commenting policies and how we moderate, please read our Community Guidelines.