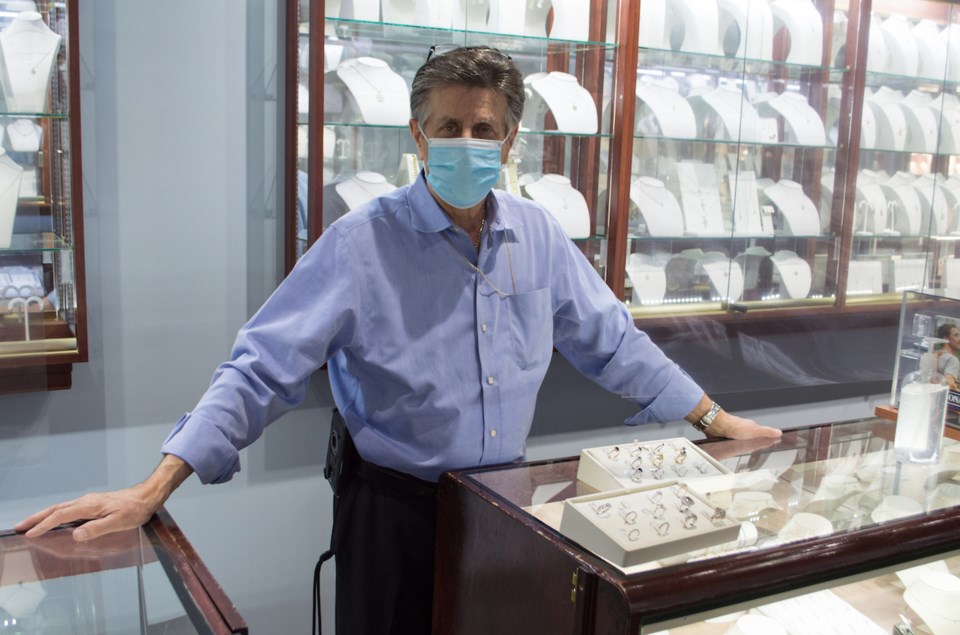 Michael Knight, chair of the Downtown Orillia Management Board and president of Town’s Jewellers is concerned for the future of downtown as the second wave of the COVID-19 pandemic puts more restrictions on the region. Tyler Evans/OrilliaMatters.

On Monday, communities within the Simcoe Muskoka District Health Unit moved into the province's orange “restrict” level, leaving Orillia business owners concerned that the region could be forced into further control measures or even another lockdown in the near future.

Michael Knight, chair of the Downtown Orillia Management Board and president of Town’s Jewellers on Mississaga Street, says he is concerned for the future of the downtown core and even his own business as COVID-19 cases rise almost every day.

“We could get closed at any time, and losing December could be life or death for a lot of businesses,” Knight said.

Knight says the cancellation of the Santa Claus parade and other promotional events have hurt downtown businesses ahead of the holiday season.

Thankfully, Knight says business has been fairly good during the months of October and November, and downtown business owners don’t seem to be too worried about the region's move from yellow into the province's orange level.

However, business owners are concerned with a potential further move that would put the region into the province's red “control” level or even the grey “lockdown” level, especially if that were to happen before the holiday season gets into full swing.

“I think it would be devastating. I think we survived the last one but I don’t know if a lot of these businesses could survive it again,” Knight said.

“It would be pretty hard on a lot of people, and Christmas won’t be as joyful as it normally is.”

Another concern for Knight and most other local business owners is the threat of the virus spreading locally due to people from communities in the red or grey zones traveling to Orillia to do their shopping.

“It’s a big problem because we are happy for the shoppers, but we want everybody to be safe,” he said. “However, I don’t think there is anything we can do to prevent the city people from coming up here to shop.”

Local retail stores and shopping centres are also bracing for another possible lockdown.

Orillia Zehrs store manager Randy Rutledge says there was an increase in traffic at their store this past weekend, but panic buying hasn’t begun just yet.

“It’s going to get busier now because you have people from another community coming to our community to do shopping, Rutledge said.

While more and more people are visiting the retail food and grocery store each day, Rutledge reminds people that panic buying is not necessary, even with the added regional restrictions.

“I’ve started doing announcements (Monday) asking customers not to panic buy. I had customers ask me this morning if we are going to run out of toilet paper and those sorts of things, so it’s on people’s minds for sure,” Rutledge said.

Rutledge says the store will be as prepared as possible in the event of more restrictions or even a lockdown, however, the efficiency of the store will depend on the shoppers.

“We really depend on the shoppers ... we need people to just manage their shopping and keep things normal,” he explained.

Rutledge also asks shoppers to think ahead to limit the number of times they need to visit the store, which will reduce potentially long wait times for customers in lineups outside.

“We are hoping we don’t get to a point where we are lining people up outside the store in the freezing cold this winter, but if people are coming every day to the grocery store, we are going to have those lineups,” he explained.

“We need people to think differently right now and get the things they need to not come back for five to seven days. It’s going to take a community effort.”

Local restaurants are also adapting to being put into the orange level this week. St.Louis Bar and Grill owner Brad Watters says the West Orillia restaurant is still “holding their own” during the pandemic.

“We can still move forward under orange and make the best of a really bad situation,” Watters said.

Watters is hoping that moving into the orange level won’t impact the local restaurant industry too much, and if anything, it might encourage people to order take-out more often as opposed to dining in.

“I think everyone in the restaurant business is just trying to survive right now,” Watters said.

While Watters is not overly concerned with the new restrictions brought on by moving into the orange level, he is worried about further restrictions and even a possible lockdown.

“I think everybody in the restaurant business has that concern, but I think we are going to get through Christmas as an orange,” Watters speculated.

However, if the province does decide to add further restrictions on our region, Watters says local restaurants are going to be put in a dire situation.

“We’ve been very fortunate in Orillia to this point to not see many restaurant closures, but I can’t see restaurants surviving on only doing take-out throughout the winter, at least not very easily,” he said.