Hospital 'acknowledges that the interactions you had ... were not consistent with the level of patient-centred care, respect and empathy we strive to achieve'
Oct 16, 2020 7:00 PM By: Andrew Philips 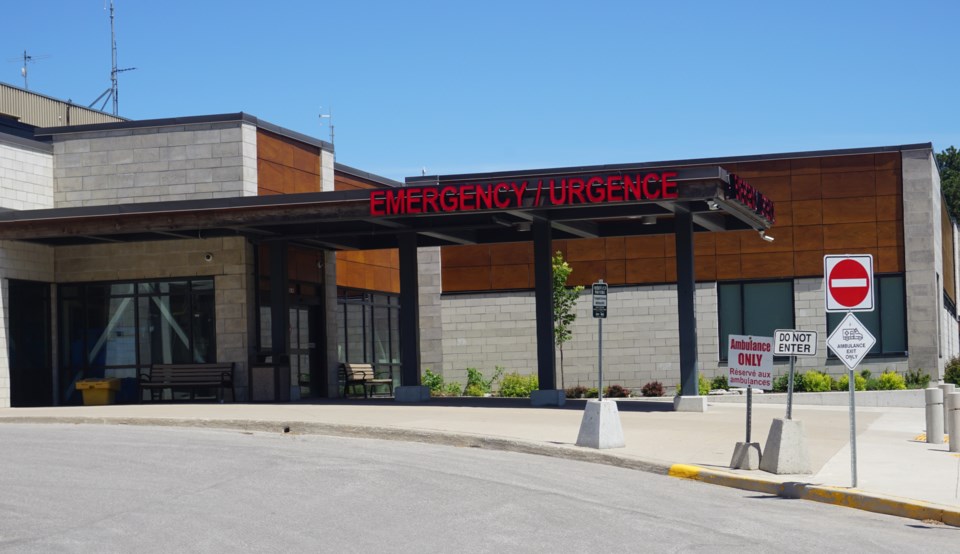 In unimaginable pain and begging for help, Shane Hamelin has difficulty believing the lack of empathy he says he experienced recently at Georgian Bay General Hospital (GBGH).

Lying in a hospital parking lot after feeling thrown aside by emergency room staff, Hamelin says he wished death would come upon him and finish the job that possible sepsis had all but started.

Hours earlier on an August morning, Hamelin began experiencing pain severe enough that he knew he had to call an ambulance. Upon arrival, a “great” nurse took his vitals and a urine sample, coming back a few minutes to tell him there was blood in his urine and "this is serious."

“After many hours, they returned and said that I had diverticulitus and my polyps were leaking out into my body,” the 44-year-old Penetanguishene resident recalls. “Then the surgeon came and said they were going to do emergency surgery first thing in the morning.”

But Hamelin, who has a number of pre-existing health issues, including chronic obstructive pulmonary disease, diverticular disease-associated colitis, thyroid tumours and degenerative disc disease, told the doctors he had to go home first to tend to his affairs and ensure his two cats would be looked after while he was in hospital.

“Dr. Lee told me that I was the most severe case in the hospital at the time,” Hamelin says. “He begged me not to leave. My stomach was leaking, my intestines were leaking into my bowels and bladder and onto my spine.

“They told me that I'm one sneeze, one cough and one bowel movement away from my intestine to burst into my stomach and become completely septic.”

After some discussion, Hamelin was told he could sign himself out, but needed to return to the hospital ER within a few hours and was advised he would then be hooked up again with an IV.

But upon his return to the hospital, Hamelin contends a nurse told him he was no longer a priority since he decided to leave and "now you have to deal with it."

“I told him I couldn't sit down or stand up, that I needed to lay down,” Hamelin recalls telling the nurse. “He did nothing. Time passed, I approached him, and nicely asked him how long until I get into a bed. He raised his voice and said, 'I don't give approximate times.'

"I asked him for any information, once again, he said, ‘You are no longer a priority, you are the one who decided to leave. It was your choice to leave, now you have to wait.’”

Frustrated, Hamelin says he asked if he should go to the Royal Victoria Hospital in Barrie and was told that was up to him.

“I then went outside, laid on the concrete and he (the nurse) called security,” he recalls. “Security asked me nicely to get off the ground. I returned inside the ER and asked him for any information he could give me.”

Hamelin then says he told the nurse he has a do-not-resuscitate order taped to his health card and felt that staff were playing with his life.

“My pain level was a 10 because the meds had worn off and I was angry,” he says. “He said he wouldn’t give me any info. I started swearing and said, ‘If you aren't going to help me, I'll go home and get drugs off the streets.’"

He then told the nurse he was taking a cab and waited outside. While he waited, the nurse came out and asked if he was ready to come back in.

“I said 'I just called the cab, will you take me into a room?'  He turned around and went inside. I yelled, 'you are just taunting me and the doctor told me to come back as soon as I could.'

“I said, ‘you are the one that's creating more pain and creating more problems and all I'm here for is to get help and you're completely ignoring me.’”

From there, things escalated quickly as Hamelin followed the nurse into the ER, took out his phone and recorded a 47-second video of emergency room staff.

“I posted it to Facebook saying that he told me I was dying earlier. Now, no longer a priority, I left, angry, mad and screaming.”

Police were then called and two security guards showed up with a police officer telling them to let him get into a cab.

Hamelin returned to the hospital by ambulance later that evening and maintains he was again treated poorly by staff.

“Within a minute of walking into the building, a nurse put her two fingers in my face, yelled at me, saying I owed her an apology and must delete the video and promise never to record again,” he says, adding this led to an additional confrontation between the two.

Some time passed, and Hamelin says the same nurse told the paramedics to drop him off in the waiting room.

“They refused and said, ‘he is in too much pain to let him suffer. We will wait until he gets a room in the ER.’”

After finally getting a room, the paramedics left, but Hamelin says he was left alone in the room for what seemed like an eternity.

“Three and a half hours later, I sat in that room, not a single person came to that room,” he explains. “I cried, screamed and begged for help.”

While Hamelin eventually encountered what he describes as a sympathetic ER nurse, much-needed treatement and excellent care over the next seven days in hospital, he says his experience should never have occurred.

“I guarantee I will never go back to that ER again,” he says. “(They) would rather me suffer and teach me a lesson over their pride. I will die first.”

“Shane, GBGH is committed to reviewing all patient feedback and identifiying opportunities to improve care,” the letter reads.

“We acknowledge that the interactions you had with staff in the emergency department were not consistent with the level of patient-centred care, respect and empathy we strive to achieve. We regret that this was your experience.”

“While we are unable to share details of our follow-up with individual staff members, we can share that we are taking actions to improve communication and conflict management with staff in the emergency department as a whole.”

Hospital president and CEO Gail Hunt says staff have reached out to Hamelin on numerous occasions to discuss his concerns.

“Stemming from our investigation, GBGH has followed up with staff to encourage our organization's values of respect, compassion, excellence and accountability are upheld among team members.

“I am apologetic Mr. Hamelin does not feel the care he received at GBGH was in keeping with those values. As a team, we are disappointed we have yet to conclude this matter to his satisfaction and are committed to working with Mr. Hamelin if he would like to see further resolution.”

Hunt says patients and family members are always encouraged to come forward to voice any concerns they may have with their care team, department/unit manager or Patient Relations.

She adds: “Feedback is important as GBGH continually strives to improve the care we provide.”