Vast majority of police foot and bike patrols from July to September took place outside of core; 'We have heard these concerns and are taking some steps to address them,' officer says
Nov 27, 2020 12:30 PM By: Nathan Taylor 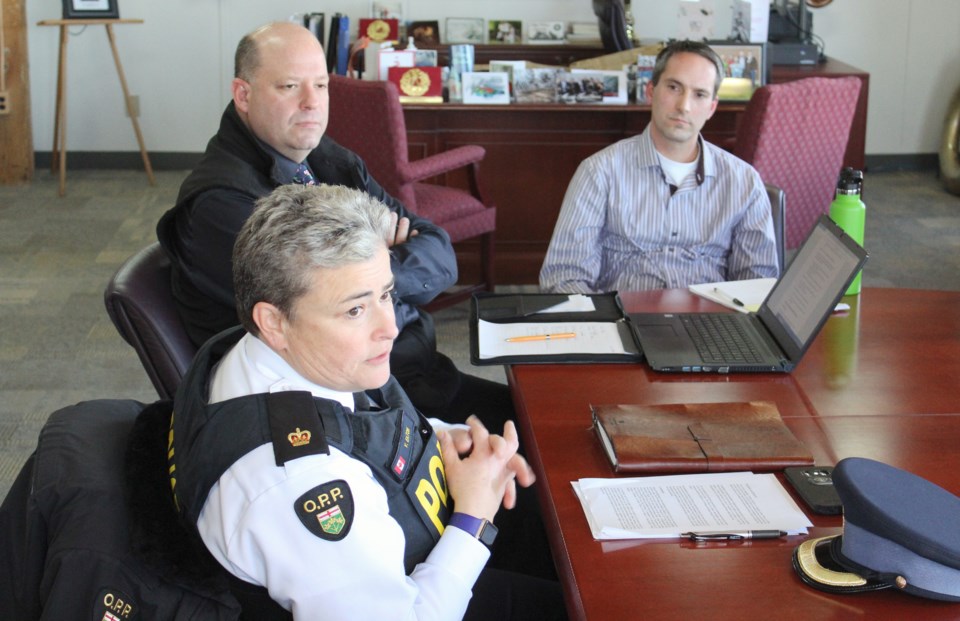 Given the number of concerns expressed recently about police presence downtown, one report at the Orillia Police Services Board meeting this week stood out to Mayor Steve Clarke.

It was noted, from July to September, Orillia OPP officers conducted 274.5 hours of foot patrol, only 42.25 hours of which were in the downtown core.

Orillia OPP also reported 29 hours of bike patrols in the city during those three months, eight hours of which were focused downtown.

“I understand the need to have foot and bike patrols in other parts of the city,” Clarke said, but added he was “surprised” by the numbers, especially since most calls for service are in the core.

During the meeting, Insp. Veronica Eaton, Orillia OPP commander, said officers have to do foot and bike patrols in all areas of the city.

On Thursday, Const. Ted Dongelmans noted there might have been “some discrepancy” in the number of hours reported to the board.

“It was probably a little bit higher than was reported,” he said.

In September, when about 25 per cent of foot and bike patrol happened downtown, police started hearing more concerns about the amount of time officers were spending in the core.

They responded, Dongelmans said, and while the October figures haven’t been submitted to the city yet, about 75 per cent of those patrols happened downtown during that month.

“It has definitely been addressed that that is an area where we should focus our foot and bike patrols,” he said. “We have heard these concerns and are taking some steps to address them.”

The COVID-19 pandemic was part of the reason the numbers have been lower for downtown patrols, he added.

From March until the end of summer, auxiliary officers were restricted from taking part in certain duties that would include public contact, including foot patrols. Once those restrictions were lifted, “we noticed a sharp increase in the presence of auxiliary officers,” Dongelmans said.

Trying to get more of a police presence is just one of the ways the city is looking to make the downtown core safer, Clarke said.

“We work really well with the OPP. We have talked about these issues extensively,” he said, noting he has created a roundtable consisting of police, council members and downtown officials to address different concerns. “We’re just making sure we’re doing all we can to mitigate any issues we have in the core of the city.”

Clarke also expects the situation will improve once the city’s surveillance camera system, which has had technical problems for at least the past two years, is upgraded.

“There are continued problems with the cameras. The system absolutely needs to be replaced,” he said.

The city is still looking at the SCRAM (Security Camera Resource and Mapping) system, which includes getting residents and businesses with surveillance cameras to register those cameras with police to aid in investigations.

Whatever the solution, “we’re hoping to have it up and running in the spring,” Clarke said.