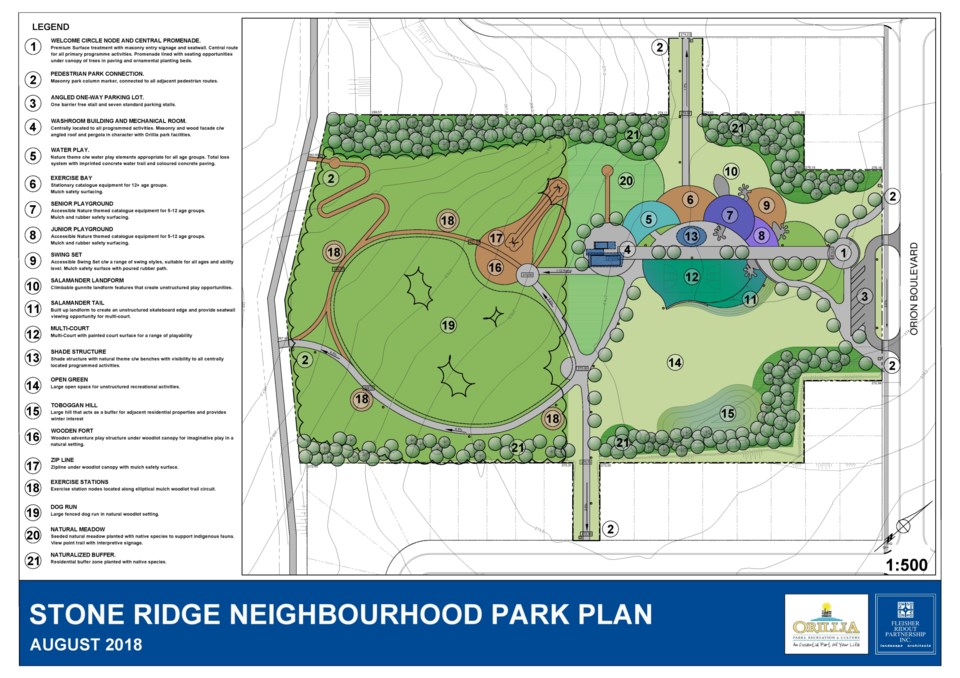 This is a conceptual design of what the new West Orillia Park might look like when it's built this year.

A new 8.3-acre park will be constructed in the Stone Ridge subdivision of West Orillia this year.

City council gave the green light to spend $2.9 million on the project during budget deliberations this week.

The decision must be ratified at Monday night's special meeting of council for that purpose.

"Given the recent surge in residential development within West Orillia, it is important that the park planning and development of parks and recreation facilities keep pace to serve new residents in a growing area of Orillia," said John McMullen, the city's manager of parks.

The park - the first in Orillia to feature a mini zip line - has been in the planning stages for two years.

In the fall of 2016, a consultant was hired to prepare a design plan for the park, which will be bordered by Orion Boulevard and Annalysse Drive.

City staff, along with the consultants, hosted a public open house in May of 2018 to present the park design ideas and collect community input.

Based on the public consultation, a conceptual master plan was developed for the park and is included above.

“The park is envisioned to be a major focal point in the new West Orillia neighbourhood and will primarily serve the residents who live in this area,” said  McMullen.

According to the report presented to council, the design of the new park will use materials to create a park inspired by nature and rooted in its surroundings.

"The park will use engaging features and visuals to create structured and unstructured play opportunities as well as seating and a paved multi-court; all of which will make it a great place for children and adults," said the report.

The property for the park was provided to the city, at no cost, as a condition of the approval of the subdivision.

The following key features are included in the park design:

Additional park features include "adventure play under the woodlot canopy" and a woodlot exercise trail.

"Is that a fact or just wishful thinking?" asked the Ward 4 councillor.

McMullen said it is part of the proposed plan.

"We're working closely with the playground designers right now to look into those type of features ... but, yes, right now a zip line is part of the proposal," said McMullen.

In addition, there will be a large open space for unstructured recreational activities and a hill that will act as a buffer for adjacent residential properties and double as a toboggan hill in the winter.

The park will include a natural meadow area planted with native species to support indigenous fauna, viewpoints with interpretive signage, and a residential buffer zone.

The western edge of the parkland includes a north-south community trail linkage through the residential neighbourhood.

The majority of the park development cost will be funded from the Development Charges Reserve ($2,349,000), with the remainder being funded from Parkland Reserves ($551,000).

The maintenance for the neighbourhood park is estimated to be $75,000 annually.

Council also agreed to spend $50,000 to upgrade the asphalt pathways at the Brant Street Park.

“I cannot stress how important this is,” Coun. Mason Ainsworth said of the project.

The Ward 3 councillor stumbled upon the park, literally, during his recent re-election campaign.

“Now that I’ve seen it first-hand, I can’t believe how bad it is,” said Ainswroth. “It’s just awful and I’m really shocked it wasn’t fixed in the past.”

Brant Street Park is located between Dalton Crescent and Brant Street, across from Lions Oval Public School and is used frequently by students from that school and those making their way to nearby Orillia Secondary School.

In addition to the updrade of the pathways, safety at road crossing points will be improved and an existing planting bed will be renovated.

But council decreed that there will be no new playground equipment installed at Victoria Park.

Staff asked for $190,000, to come from the park equipment reserve, to replace the equipment at the mid-city park between Nottawasaga Street and Coldwater Road.

The city owns and maintains 31 different playgrounds, which each have a 15-20-year life expectancy which varies due to use and other factors.

The location and priority for replacement playground equipment is informed by the 2014 Parks, Recreation, Culture Master Plan.

The current playground apparatus at Victoria Park was installed in 2002. Due to its proximity to a splash pad, it's well used.

“The playground requires an upgrade based on its age,” said a report to council. “This upgrade will also help to meet new accessibility guidelines for playgrounds.”

However, councillors did not approve the request.