If downtown board's snow-removal machine breaks down, 'give us a break on our taxes,' Paper Kapers owner says
Feb 7, 2019 1:45 PM By: Nathan Taylor 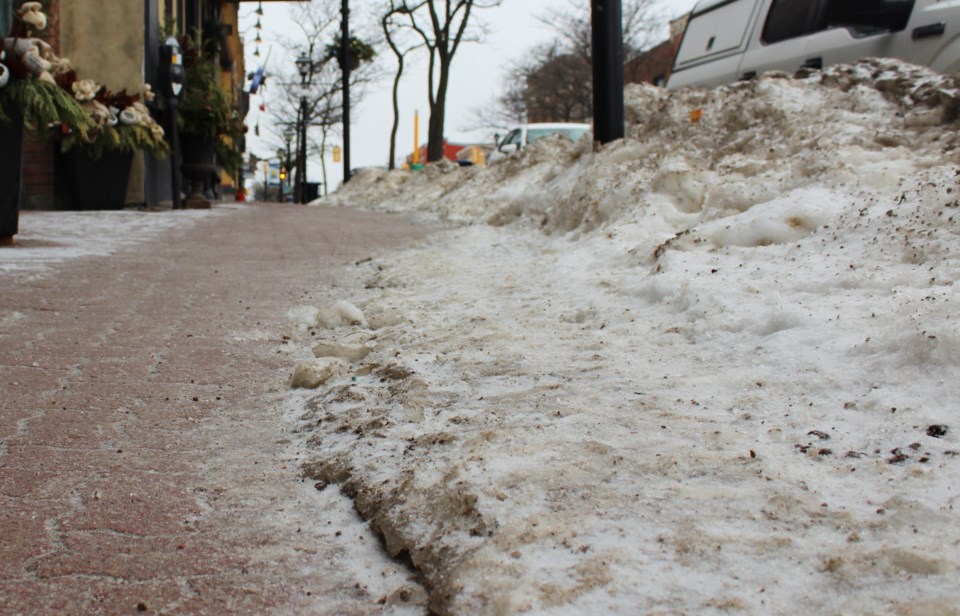 Merchants in downtown Orillia are required to remove snow and ice from the sidewalks in front of their shops. Nathan Taylor/OrilliaMatters

A blast of wintry weather and an often-unreliable snow-clearing machine can make for a perfect storm in downtown Orillia.

A city bylaw officer issued notices this week to 15 businesses, urging them to clear the snow and ice from the sidewalks in front of their shops within two hours.

“I’ve never got a notice like that, and I’ve been here for seven years,” said Ellen Wolper, owner of Paper Kapers on Mississaga Street East.

That changed this week when Paper Kapers received a notice from the bylaw officer.

Wolper feels certain businesses are being given a pass, saying, “Some of us are getting nailed for these things and others aren’t.”

That isn’t the case, according to Shawn Crawford, the city’s manager of legislative services.

He said the bylaw officer walked the entire business improvement area and identified 15 “blatant breaches of the bylaw.” There are 218 business properties in the downtown core.

“Some complaints came in on Monday morning that certain businesses hadn’t cleared the snow and ice from the sidewalks,” he said, noting the complaints typically come from elderly pedestrians and people with physical disabilities.

“I can count, probably, on one hand how many times the officers go out in the winter to issue the notices. The merchants are usually really good at clearing the sidewalks.”

The bylaw states merchants must clear the sidewalks before 8:30 a.m. However, about 10 years ago, the Downtown Orillia Management Board (DOMB) and the city jointly purchased a Hako machine that is used for removing snow from downtown sidewalks in the winter and sweeping the streets during other times of the year.

“It’s always been to augment (merchants’) snow-clearing efforts, not absolve them from it,” said DOMB manager Lisa Thomson-Roop. “It’s a service we like to do because we can move the snow a lot faster than a shovel can.”

“Every time the Hako’s down, I email the DOMB and say, ‘Why don’t you be a good neighbour and help us out?’” she said.

Thomson-Roop acknowledged there have been “issues with (the Hako) the last couple of years,” but added the DOMB tries to help merchants when that happens.

“If the machine goes down, we can do some hand-sanding,” she said.

The DOMB cannot use the city’s sidewalk plows, though, as they are too large for the downtown sidewalks.

Thomson-Roop is hoping to get funding from the city to replace the Hako, but it won’t be included in this year’s budget.

Wolper said she understands it’s the merchants’ responsibility to clear the sidewalks, but added if the Hako breaks down, “then give us a break on our taxes.”

Extra marine patrols added to combat increased impaired boating
Jul 3, 2020 6:15 PM
Comments
We welcome your feedback and encourage you to share your thoughts. We ask that you be respectful of others and their points of view, refrain from personal attacks and stay on topic. To learn about our commenting policies and how we moderate, please read our Community Guidelines.