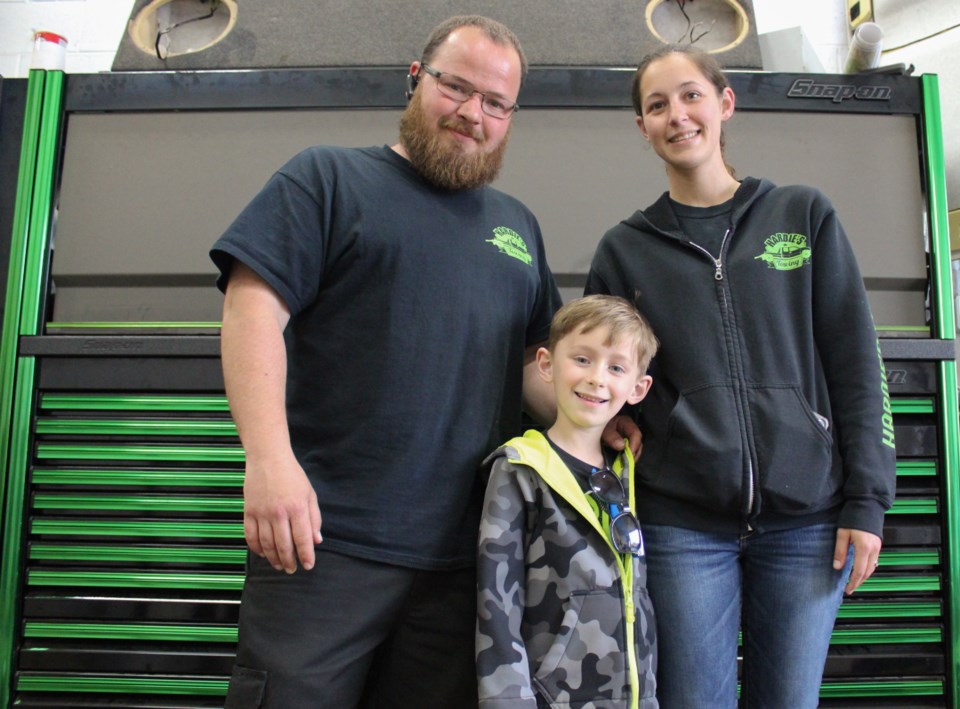 Eric Hardie is shown with his parents, Jason and Jessica. The six-year-old boy is in the midst of completing 100 random acts of kindness. Nathan Taylor/OrilliaMatters

It started with Eric Hardie handing out flowers to people around town.

Forty-one acts of kindness later, and the six-year-old Orillia boy is still only getting started.

Eric’s curiosity about the role of police dogs led his mother, Jessica, to pull up some YouTube videos for her son. One, in particular, caught his eye. It showed police officers performing acts of kindness.

Inspired, he told his mom he wanted to do something similar.

“We weren’t even 30 seconds into the video when he said, ‘Mom, can I do that?’” Jessica recalled.

“It’s because they were being nice and I wanted to do the same thing,” Eric added.

So, he set out to perform 100 random acts of kindness. He has surprised bank employees with jelly beans, fire department dispatchers with flowers, random strangers with gift cards.

While he wasn’t seeking attention, that’s what he got when he delivered coffee cards to the Orillia OPP detachment.

Police didn’t know who he was at first, but later, when Eric went along with his father, Jason, owner of Hardie’s Towing, to pick up a vehicle, an officer at the scene recognized the youngster.

Eric was invited back to the station and to OPP General Headquarters, where he received a “swag bag” of items and a plaque recognizing him for his generous acts. He even got a shout-out from Orillia OPP on the sign on its Peter Street property.

“It made me happy because it’s very special,” he said.

This boy is an #inspiration.  His 100 random acts of #kindness has made people of Orillia smile, including the #OrilliaOPP. He handed out coffee cards, flowers and made people feel good with a positive note he hand wrote!  We can't wait to see what's next. #KindnessMatters^mh pic.twitter.com/mSItoVq8rA

Eric’s parents are impressed, though not terribly surprised, with what their son is doing.

“That’s how he is. He likes making people happy,” said Jason. “He’s very sensitive, which I think plays into this. He doesn’t like to feel bad and he doesn’t like to see other people feel bad.”

That became clear when Eric was asked if he would encourage people to pay it forward.

He already knows the next way he’s going to make people happy: cookies. That will be his 43rd random act of kindness. That’s 57 away from his initial goal, but he doesn't plan to stop at 100.

Bursaries available for local women going into 'booming' trades
Jun 1, 2020 7:30 AM
Comments
We welcome your feedback and encourage you to share your thoughts. We ask that you be respectful of others and their points of view, refrain from personal attacks and stay on topic. To learn about our commenting policies and how we moderate, please read our Community Guidelines.